Up to Las Herrerias

I coughed and coughed up the initial (marginal) hill outside our Alberge and shortly after breakfast that means you loose some breaky. It is for that reason I take my pills in a specific order for breakfasts like this. Antibiotics **before** breakfast, salt tablets and other supplements scattered in between mouthfuls with what I think is least important at towards the end, or just  save some for morning tea swallowing.
Anyways, I try keep the coughing away from the other pilgrims, letting them pas before I have another good cough. So morning progress  is a little slow for me occasionally.

Kath and Wendy were a little ahead of me this morning, but they decided to make a small detour through the first of many tunnels we saw, giving me an opportunity to catch up...

Our chosen flat route was pretty much following roads the whole time. They aren't busy as the main roads are up in the sky now, boring through mountains. Never seen so many 'high'ways and tunnels. In the mean time Kath and I were both worried about the girls in the mountains doing the mucho way.
As we find cafés and other excuses to stop and eat and drink they were probably battling hail storms and tornadoes up in the huge mountains above us,  all around us. We may have climbed a couple of hundred meters over the day, but they would've done at east 1200 vertical meters and over a longer distance too. 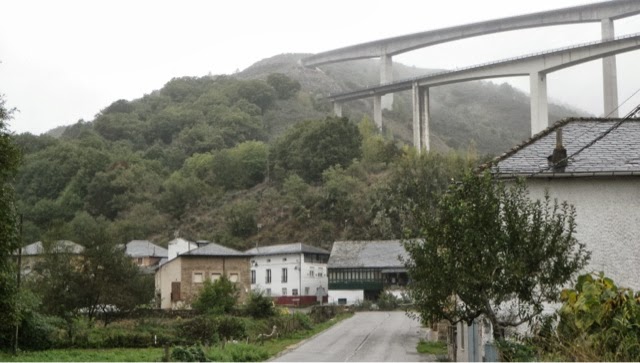 Kath beat me to the refuge again. I really should smuggle a few more rocks into her backpack. She chatted with Judy for quite some time and listened to her phone's music playing through its little speaker the rest of the day. I listened to my podcast, which I now do through 1 ear as my set has succumbed to my rough treatment. Amazingly the mike still works, despite being on the dead side. The button on that side doesn't even work, and the break in the cable is at the plug.
After one little break with Kathleen I left my phone on the concrete barrier between the footpath and the road for a second. As I tried to remind myself not to forget it I stood up and left. A few hundred meters down the road I remembered - that is just about the time it takes for me to miss it. I walked back and got it.
The drizzle continued all day, and i was farkeling with my phone map close to my destination when Alex from Taiwan walked past at his very leisurely pace, and called out 2.7. He has an app on his phone that gives distance and direction to all nearby villages. I'd run into him in the past, and the iPhone we have in common. Language we don't, but we manage with my translation app... We occasionally walk together, silently, occasionally exchanging iPhone screens.
Alex stopped at a fancy alberge in Ruitelan, where they have a washing machine (see below) and i walked another couple of kilometres till i hit the tiny hamlet of Las Herrerias where we were booked into the hotel Casa Polin - also with laundry facilities. Kath was sitting outside finishing her cerveza. 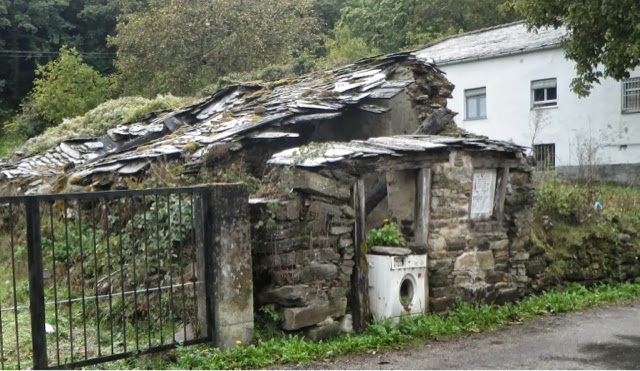 Given the distance the girls had to hike today I didn't expect them in till 6 or perhaps 630pm, but at about 5pm I got a call from Sineade they had both arrived in one of the Valcarca towns after getting lost and hiking about 30kms. Sineade even lost her water bottle and her shoe soles had big holes in them when she finally made it back about 6pm. I assumed they'd take a cab for the next 7km, but they walked in. Had Kathleen been the gambling type I would've lost a bet here.

At least there was a hotel tonight for the women to recover. I am also glad not to have to climb on a bunk and juggle my meds on a small mattress. For some reason i thought the walking would get easier towards the end, but it certainly isn't for me. Walking the extra 100km to Cape Finisterre from Santiago will be very hard at 33km/day I think. May have to  reconsider that...