Last night I had a couple of those local drinks and felt a little wobbly when retiring to my private room. Hence didn't sleep particularly well. The €1 beer machine at my little private Albergue wasn't required for breakfast. Anyways, breakfast out of the way with Deede and Wendy - always purely coincidental who you meet but as it happens you are aligned with certain people more than others. They do say that great minds think alike.... 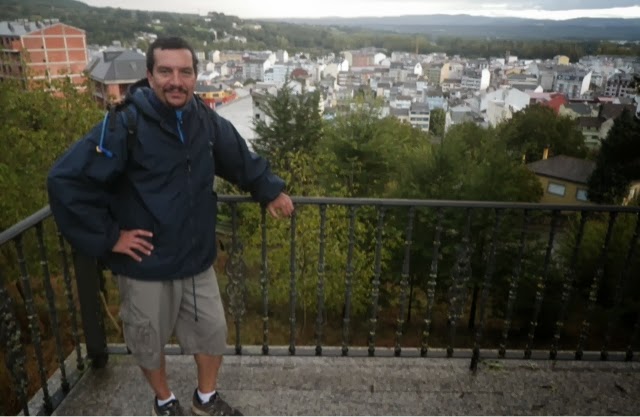 Today's walk started with a decent uphill. Though I found my long lost Camino mate John (pictured above on the way out of town) I was not going to keep up with him going up the hill. Instead I took my time, stopped to put rainwear on,  phoned my mates at home who are preparing for a 10km run tomorrow, got word that a best mate's mother passed away,... And I slowly made my way up, reflecting in life. Past a little creek with a remembrance plague for a peregrine who died last month. I was also thinking of the people who died with CF in the past 24 hours. Facebook can be a terrible messenger of sad news. Dozens of new faces were racing past me as I was walking with teary eyes.
A man called Tom was frantically running up the path looking for his wife Sheila. They got separated. I vowed to keep my eyes peeked for her.
Now that we have passed Sarria there are a lot more people on the Camino who are tourist pilgrims, some of whom come in large organised groups. They take a leisurely week to walk into Santiago and still qualify for the Compostela pilgrimage certificate. This means the true pilgrims can now beidentified by their dirty looks and awkward smells. Some of the newbies are over enthusiastically yelling out Buen Camino to everyone. We try not to sneer at them :) 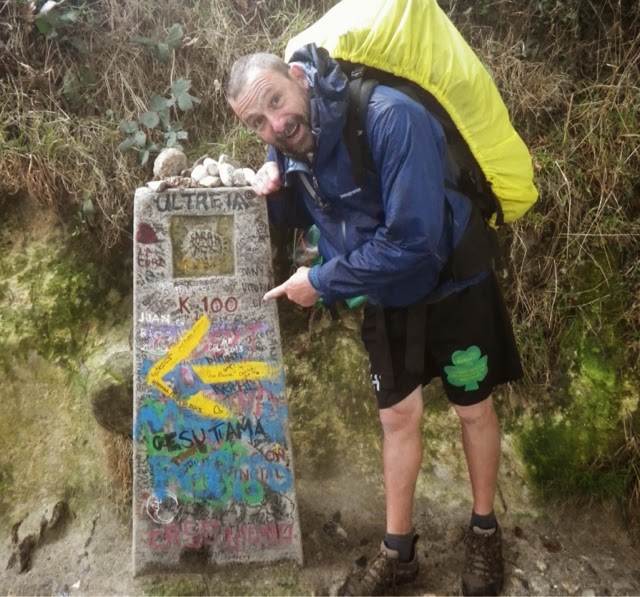 It is now a mere 100km to Santiago. Most of us seasoned peregrines could probably do that in one day, or in their sleep.
Once the worst of the breakfast hill is over I run into Joke from Belgium (no this is not a belgian joke, well, it is i suppose,...) and stop for coffee with her at every opportunity. Soon this turned out to include a beer or two as well when people we continued to run in were also consuming. It was a mere 20 odd kilometres today, and the vertical up was no more than a couple of hundred meters. Chicken feed. We ran into others and Sarah from the USA joined us as well, and slowly we had a small group of Camino family walking along. Even Alex from Taiwan made a showing.

The road is well marked now, and the signs are fancier and fancier (see Sarah and Joke passing one above). There are random stops with snacks in return for donations. In one the sign clearly said no small change like 5 and 10c pieces, foreign coins etc. and urging us to be reasonable with our donation as the monies are used to buy tomorrow's pilgrims supplies - unless you were a true pilgrim and had no money you could get what you wanted. Typically on offer are coffee and tea from thermos flasks and fruit and biscuits.

Here is Alex walking down the track with Joke. Though the tack is still very authentic, the worship places are more frequent, with trees with ribbons on them, trees with discarded bits of pilgrim junk, some with photos and prayers too. 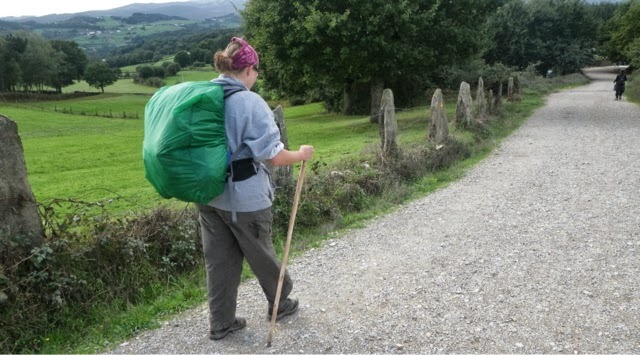 Gravestone fences was a new one for me. They weren't really gravestones, but they sure reminded me of them. It all makes the way entertaining and more fun. With the frequent stops it was quite pleasant.
Here are some Spanish peregrines admiring the ribbon tree...

I finally ran into Paul and Martin, the father and son from Tasmania. They were staying at the Alberge where I stopped today to have a Guinness. They are from Westbury, about 50kms from my home. Small world.
And then we descended into the town of Portomarin. The river here is really wide. The whole village was transplanted up the banks in the 80s when a dam was built nearby. Even the church was moved! Anyways, the bridge was impressive, ready for bungy jumping! It created a bit of vertigo for me. Wonderful. The old bridge below, remnants of other old bridges close by too. 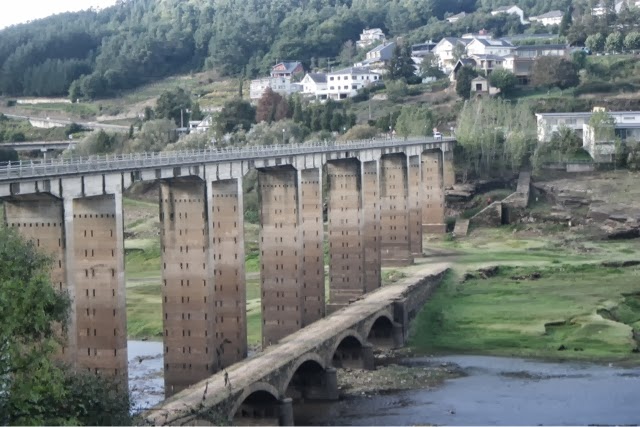 Sineade and Kath already had me booked into the first Albergue in town, so that was very convenient. Jim had found them and was having drinks with them already. I didn't get here till 530pm after my most leisurely day yet. Still we covered well over 20kms. 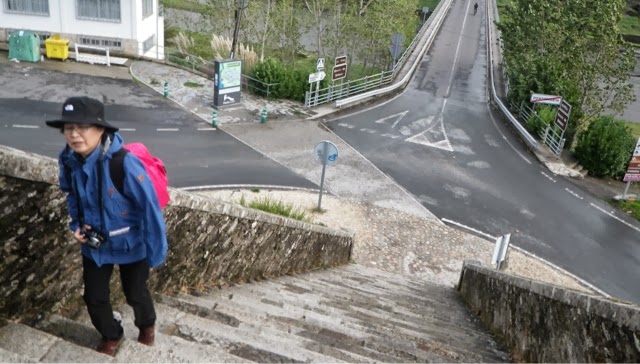 After crossing the bridge you need to climb up steep stairs to get into town. Pretty seriously steep they are too! I struggle my way up with my lung function . 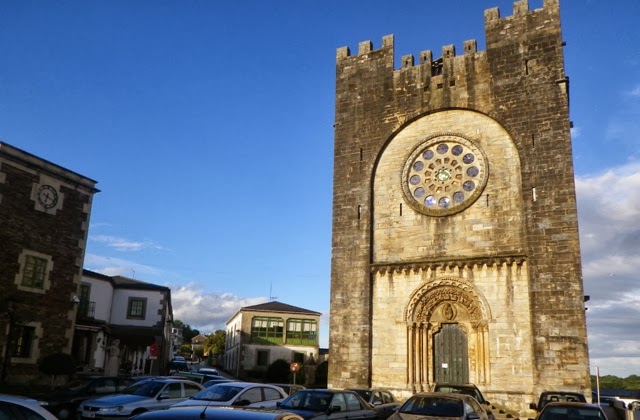 Here is the church that was moved stone by stone. You can still see the numbers scratched into some of the stones. Every piece was numbered so it could be assembled the exact same way again. Like Abu Simbel, the sun temple on the Nile in upper Egypt. I regretted not visiting that when I was in Egypt in the 80s  because of a few lousy dollars I thought I couldn't afford at the time. Well, I was travelling on  a $7/ day budget seriously! Of course that wasn't enough so I ended up on a kibbutz in Israel for a month!
Anyways, did my groceries in town, visited an ATM, ran into many long lost Camino buddies, and got a confirmation that Ron from Ontario is in town! Hope to walk into Santiago with him, he means a lot to me.  We will surely choose a restaurant or bar in common soon I hope (as fools seldom differ) now that we are on the same schedule again..
The Albergue here is nice, the disposable paper/plastic fitted sheets are pre-fited , more than one toilet... Showers are non adjustable and way too hot, perfect. Nice people in my dorm too. I will sleep well tonight.

Fantastic, great to read you've had a leisurely 20+km ha, while I walked my feet into the ground over 10km & the mandatory beer at the 5km HHH piss stop. Oh did I regret that!!! Only 100 km to go or less, woo hoo. Way to go, but then at the end of that you're still not stopping!!!!! Off to the End of the World. Gee Whiz. We're all so proud, xx