Well, today was a bit of an epic day. Just going back tolast evening: My second church service on the Camino was in this little church opposite the UK run Alberge. The service was pretty much chanted in Latin. It happened to be a religious day today. Very cool in a crumbling little church that must be almost 1000 years old by my estimate. I could be out by a few decades but who's counting.
Anyways. Had dinner and a large whiskey in the hotel across the road and went to the Alberge to go to bed, the posted lights out time was 1030pm and I had allowed 30 minutes for nebs. Plenty of power points were available in the Alberge, but only one in the sleeping quarters where 30 of us slept in bunks. I was strategically positioned on the top bunk next to it. An Italian man was below me charging his phone. I asked if I could use the power and plug his phone back in once done. He did not understand that I needed it for medical purposes perhaps despite my nebuliser looking suspiciously like a medical device lying on a bed full of medicine bag, pills, needles and potions. It didn't click. Five minutes! I waited. Five more minutes. Eventually he let me plug it in. I barely started and some peregrine turned the lights off at 1015pm. Ten pm is generally speaking the usual time for lights out. I sat up coughing and spluttering, huffing and puffing for another 15 minutes with my headlight on. Then I shone my light towards the guy and asked if he'd like me to plug in his phone. No, no he said, is ok.
A huge peregrine (whom I greatly admire for doing the El Camino!!)  in the room snored like a mule. It was the first time I had to use my ear plugs. I still had a good night! Only scrambled off the top bunk a few times for peeing interludes. Navigating your way down with quite sore feet and stiff legs is always fun in the dark.
Next morning when the majority were up and the lights eventually went on I started my morning neb. Well, after unplugging the guys phone and saying 'sorry!'. I was last out the Alberge after a basic breakfast of coffee, jam on stale bread and more coffee. Given the price was 'donation' this was a great deal of course. I make a point of donating €10 at these places, despite many albergues typically costing between €5 and €10. This one was super friendly too and clean, with a lounge, a fire, a kitchen, fruit and Breaky provided. It was 8am. 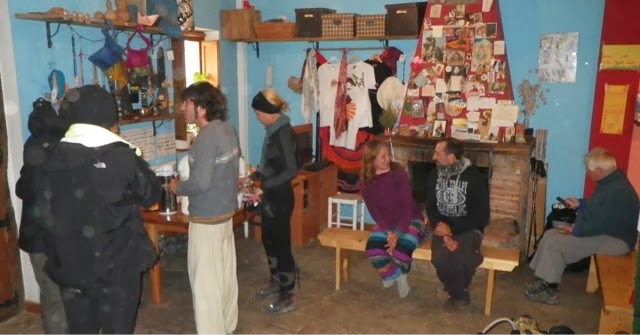 It was still dark when I left on my own, but was quickly joined by the vivacious Mexican Veronica who had claimed to leave at 6am with Jim. We watched the sun come up behind us. We walked up the hill to the first village 4kms up the road or so, where half the Camino family was having breaky. Giel from holland. Marg and Judy from WA, Kath and Sineade were there too...  Organic muesli cake for me, with coffee thanks. Self serve kind of relaxed atmosphere, see above. Very nice.  The spanish manager was almost pashing with a young peregrine spunk half his age, and wasn't too worried about €€€ and in his credit sincerely interested and impressed with my CF postcards.
We filed out of the warm place into the cold for a charge up to this legendary cross on the Camino. One of the highest points on The Way too, about 1500m above sea level. It was only a few kilometres up the road. 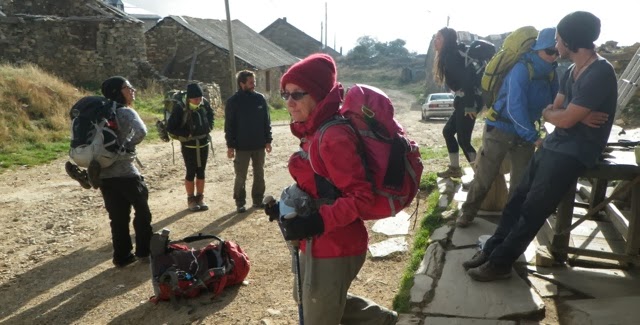 Giel is intending to go into the mountains to a commune for a week or so. I hope he finds it with his scant directions. We said our farewells. He is a nice man. Veronica didn't stay for breakfast, she threw back a juice and continued earlier. I'll see her again I trust.

It was clear we were climbing high above the Meseta now, and into the hills we'd seen for days in the distance. I am coughing and huffing my way up. These hills didn't seem all that big from a distance. I was joined by an irish lady i'd met the day before, can't recall her name now.... I hate that. Anyways, she had a car accident in her deep past and was also on pancreatic enzymes and insulin! She had a pump instead of a pen, and loved it. She was an inspirational woman to talk to. Hope I run into her again soon. She is part of an Irish group of people who are here walking part of the Camino.
And then the cross appeared. Here is my drug compatriot... And here I am yours truly on top of the Pass at the Cruz de Ferra. 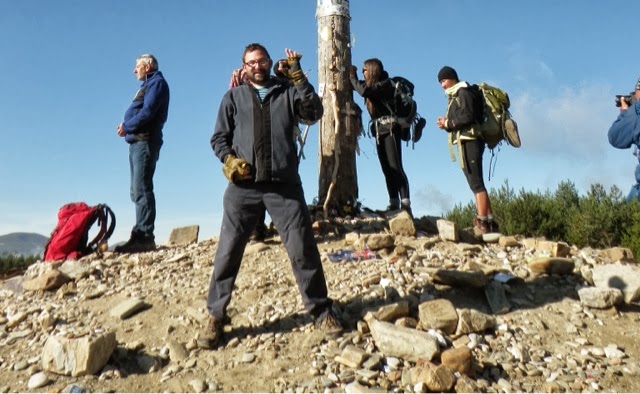 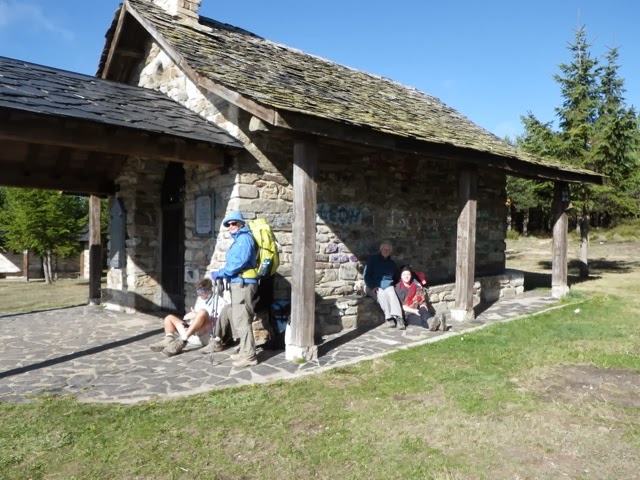 In the shade we see Sineade and Kathleen lounging around.
And then the walk started. It was meant to mostly be downhill to Molinaseca, but first there were some ups and downs till we got to Manjarin and the hippy shop below.

It now became apparent we were deep in the mountains, or rather on top of them. Surprisingly large mountains all around. I had no idea there were such large mountains here. We walked through a few villages, past village people wishing us Bueno retardos and Buen caminos. All very welcoming.

I swapped to my five finger shoes and was walking with my WA friends Marg and Judy who walk my pace. The surface was very hard and rocky, quite steep too. Somewhere here Lynda had come to grief and gotten her black eye and other injuries from a fall yesterday.
The descent continued for a long time and eventually we could see Ponferada in the distance, way down in the distance. You can identify the power station, looks like a nuclear one with a cooling lake next to it. Loads of wind turbines on all the hills too. With the frugal use of lights I wonder why they need so much... 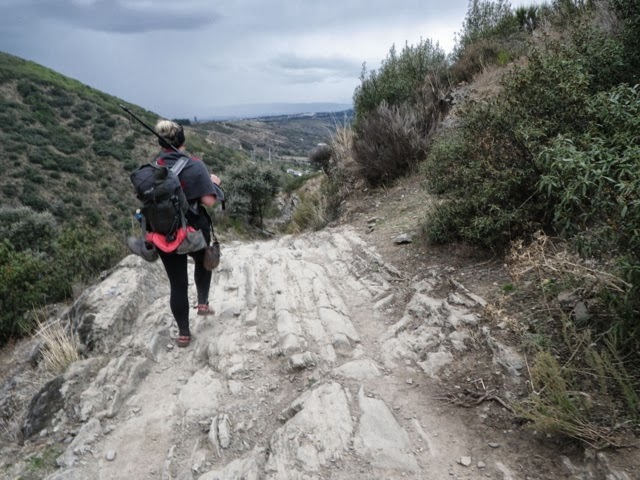 Above we see Sineade coming down on her sandals....
We stopped for a late lunch at El Acebo one third of the way down the 1000 meter descend. We probably should've stayed there. Marg and Judy checked into a hotel. Kathleen and Sinaede were there finishing their lunch, and determined to get to Molinaseca for the night , another 10km down the hill. I swapped shoes again. With barefoot runners it is a lot slower coming down rocky slopes with a backpack as you feel each stone. Rubber soles enables you to practically  run down. Horses for causes.
In rain we struggled into the said town around about 630pm. We found a proper little hotel, found father Jim, had dinner, drinks and whiskey, and retired. Tomorrow we'll bravely attempt the small walk into Ponferrada, after a late check out! Glad to report Deede and mum are on their way to Ponferrada too tomorrow. 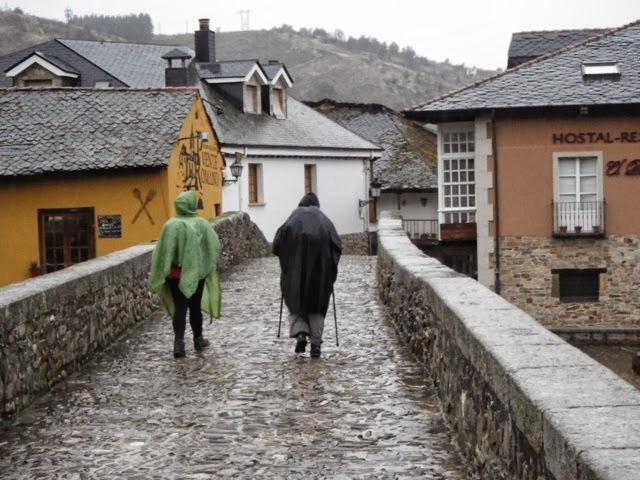 Us walking into Molinaseca...