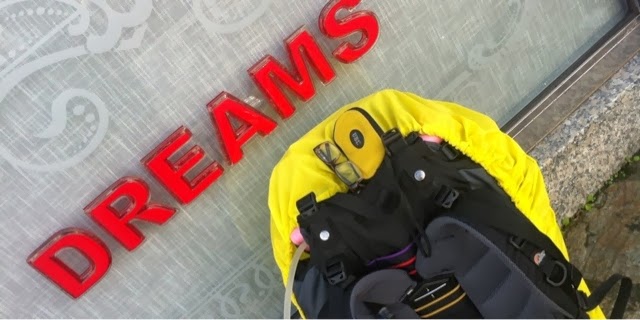 Waking up a after a long deep sleep in a hotel room alone with proper sheets and blankets, after a shower with a real towel (and not my minimal travel chamois)... you feel so good that you could do it all again.
Flippantly I google Santiago to Finisterre and immediately come upon the latest travel maps that show it can now be done in 4 comfy days, and no need for the three big 30km+ days... What was I going to do before my flight on Wednesday in any case. I checked my options of being a tourist, joining Karina and Mark for a bit on their road trip, go to a beach somewhere, visit Madrid.... The thought of walking casually for another four days, suddenly seemed quite viable. Specially when it turns out some other Camino family friends are also doing it and planning on the 4 days.
Time for the 12 o'clock mass in the cathedral. Apparently they call out the number of pilgrims form each country. It is a nice mass, a nun sings beautifully, her hand articulating her song high up in the air. It is a small spectacle. All in Spanish I think, but occasionally I recognise other languages. It is very full, many people standing up, it is very touristy. There are three masses a day like this perhaps and on Fridays they swing the big incense bucket through the church. That'd be cool, but if I walk tomorrow I won't see that. I think that is a sacrifice I'm willing to make as I get up from my hard pew after the service. I walk around the cathedral and see the people queuing to see st james and some other saints. I am not religious enough to consider doing that.
after recovering from the service i have lunch with Charlene and Joke and their Camino family, Steve, Joanne,... And Charlene said she'd consider walking too! Joke is determined to go, as her friends wouldn't be impressed by walking from the French Pyrenees to a church in Spain, but they would be if she walked form the Pyrenees to the Atlantic Ocean! I kind of agree. And so by the end of the day I too decide I need to go! If I leave tomorrow and take four days, catch bus back to Santiago, train to Madrid the following morning it will all work with my schedule.
Now I needed to  look for a place to recharge my phone for the next week as i have no credit and internet left. During my day I found I where where I could recharge my Digi prepaid phone, only for all the major phone brands. Even the post office and the tobacconist, places that recharge most phone services  couldn't do it. so in the end I bought a Vodaphone sim for the last week, which means another phone number. I was glad to also buy a quality earphone for my phone, as the old one had died. I like listening to podcasts through two ears!
Next I try to get in touch with Carlene and Kathleen for dinner, but they had eaten already and were in their hotel. As I tried to find their hotel my phone ran out of Internet; no maps. Then I  found Jo, Lynda and Rebecca having dinner and told them the news and said my farewells. They didn't talk me out of my plan to walk. As I roamed the old town Karina spotted me and pulled me into a bar with her in laws and Mark, and plied me with beer before going for dinner. I told them my plan. They also didn't try talk me out of it. After dinner we visited a bar for one more drink, a Spanish sized whiskey. After that whiskey I was ready to walk again, through the night if need be! Bed time!
In the middle of the night a storm wakes me up, I close the hotel window and take my now wet stuff from under it, put a towel down to absorb the puddle, my feet are aching... A very productive neb morning neb session reassures me that I am doing the right thing to walk, as non activity doesn't go well with my lungs! 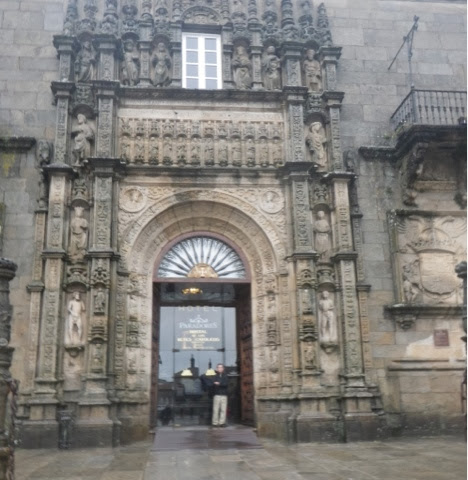 I have breakfast with Karina's clan and say farewell, Sineade walks in with her cousin and we say our farewells. She smells all nice and clean now, and has pretty band aids around her nail-less big toes.
Next i book a first class train ticket to Madrid , one that is least likely to crash. Plane schedules were not suitable and much to expensive on this short a notice, so first class seemed a worthy alternative. Especially as I would be flying to polluted Dubai and need to make sure I stay well before the flight and not catch anything in a crowded train.
And at 10am I walk past the Parador hotel where many friends are having breakfast including Joke. I received a message earlier from Joke to say  that she  decided to leave a day later. I can't text her back. When I changed to my vodaphone sim and tried texting both Joke and Charlene my new number I couldn't even do that. Seems the vodaphone service can't sent  texts to  international numbers. What a pain, I only have their international numbers. Later on I find out that international texts are 60c each and my €10 bought me 20 minutes local calls, 20 local text messages and 500MB data, leaving me no further credit. Whoops. I can't even receive their messages now if they text to my old number. I can't swap sims whilst walking in the rain. Me and my sim fetishes,... I hope Joke will find out that I am out if communicado. She might think I am upset with her for postponing as I am it replying to her anymore. 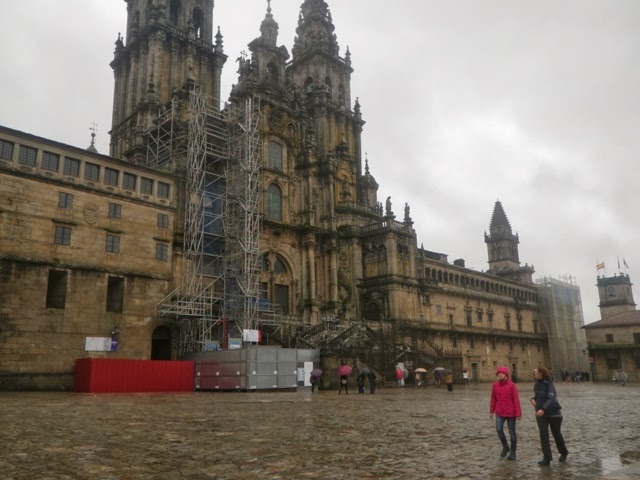 One last glimpse of the cathedral in the rain, drop off my bag at the nearby hotel  where my meds bag got dropped yesterday... That was a story,... The hotel reception spoke to the bar where my bag was, 5kms away, and somehow it was arranged they'd drop the bag off at this nearby little hotel. I picked up my bag there a bit later and immediately reserved a room for my last night before train/flying out. Amazing how I was reunited with my bag again.
And 1030am I finally left Santiago proper! 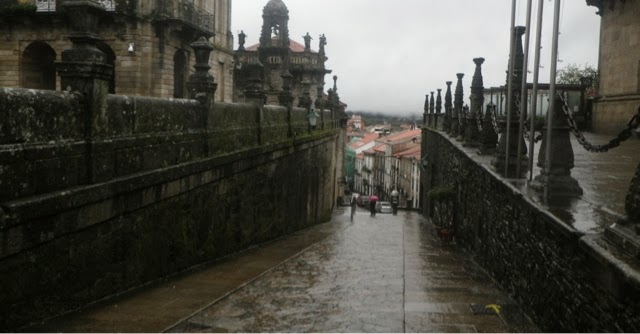 This is the lane way down from the cathedral past the Parador, to where my next hotel is and how one leaves for Finisterre. It appears it is now called Fisterre, I hope it is the same place. In any case I am following the signs!
A Friendly New York accented perigrine walking with two South Korean ladies passes me up a hill as I grunt a Buen Camino to them. He replies asking me if I am South African or Australian... Not a bad guess I tell him. South African can easily be confused as a Dutch accent, and I am both Dutch and Australian. A bit later the rain has stopped and he is helping the ladies with their gear and I overtake him. I tell him he was pretty spot on. You have asthma he asks me.... Most people assume I have a cough from rain and cold, but again he nailed that one pretty much, even though asthma and CF aren't exactly the same thing. Just then Charlene comes up the track. I can't believe this, I left so late! She had breakfast at the Parador with the others. 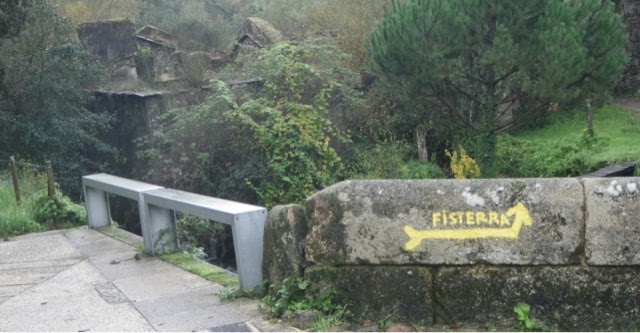 Pretty scenery on the way out, and a last glimpse of the cathedral,...

When we find a place to stop for coffee and snacks we find Kerry from Seattle there. So she's also doing it! No crowds now, just the people I know, the people that left Santiago late! 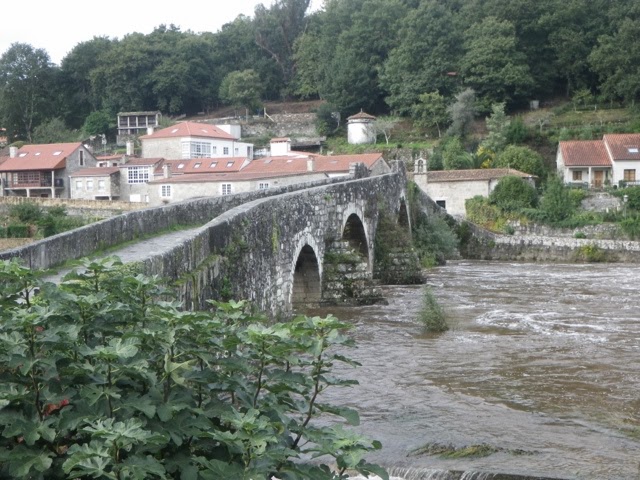 Charlene and I continue to Negreira, and find an Alberge at Chancela the town just before it. It is a nice modern Alberge where Charlene gets a private room and I pay for dorm bed. We both get towels and sheets, fitted sheets, and heck they are even properly folded (who folds fitted sheets properly??), this is great. What is even better, probably because the nice lady read my postcard, I too got a private room!
The laundry facilities are fantastic, commercial grade complete with detergent. Our combined laundry is done for €5, and the drier got it dry before dinner. Sure enough there is an elevator and WiFi. If this is how the four days will continue I will be very pleased. 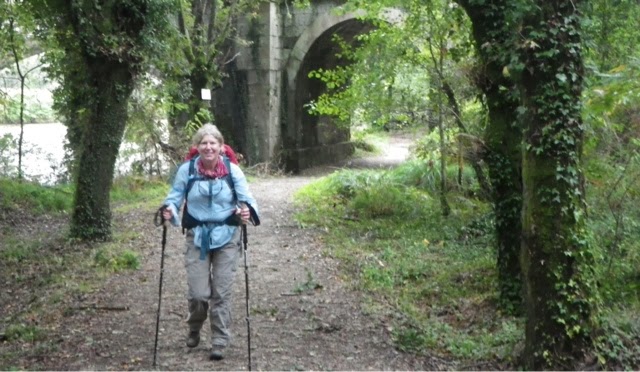 If tomorrow is a good day we might even do 30+. I personally doubt it as my foot is still quite sore, but who knows. Never say never. The forecast is good.

Great to read & hear you are sounding happy & positive, don't forget the anti inflammatories !!!!
Yes you CAN fold fitted sheets beautifully, you have a whole linen press to fold on your return, lol :)