Today i was determined to get out of my nest early and beat Kathleen to Rabanal del Camino. Just life got in the way again. By the time I'd done my nebs the Albergue was almost empty. I'd had a good night, nice dinner with Jim, Kathleen and Sineade and was in bed in a timely manner. I figured i'd have coffee in town and breakfast along the way. But when I walked into a random cafe I found Sally there. This would be the last time for me to see her for quite some time as she was staying here an extra day and was not likely to walk as fast as me. Her husband is meeting her in Sarria at the end of the month and its no point if she gets there a week early. A teary farewell. This Camino makes us all very emotional. I cry at a drop of a hat in any case, even bursting in tears when seeing people I thought had flown the coupe (gone ahead). So I had a few coffees... 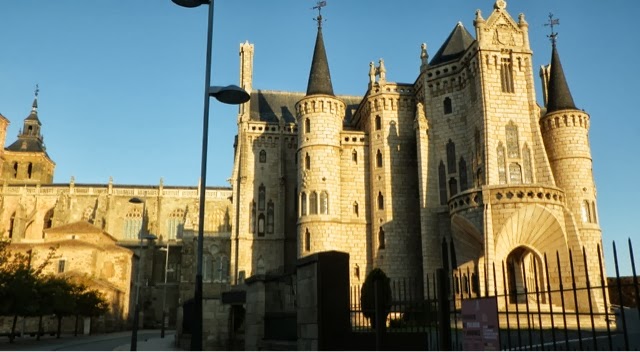 Walking out of town I saw the Gaudi building next to the Astorgia cathedral. Hard to miss them now. Once you've seen one you recognise the others. Absolutely magnificent. The cathedral was also very nice. 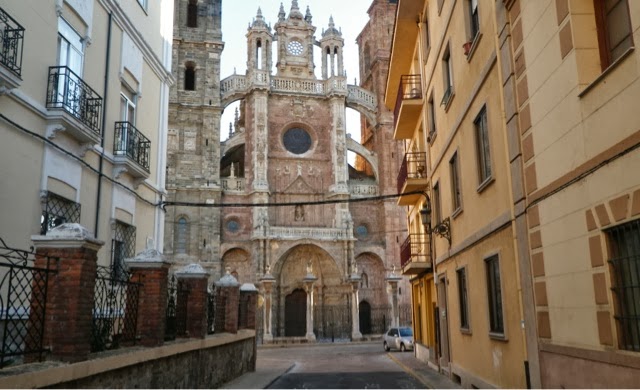 Stopping for coffee with Sarah from the USA and breakfast was in a town off the track. Apparently I had taken an alternate route unbeknownst to me. Marge and Judy from WA had done the same, and we ended up walking together.

We walked past the 'cowboy bar' where the man behind the bar was a little upset about something to do with the toilets. The toilets were not particularly clean either and no one there had a good word to say about the place for some reason. I drank the agua con gas, offered my nuts and candies to the innocent men and women, parted with postcards and headed off towards  Rabanal de Camino.
Sun shining, a rocky path, nice views of distant hills dotted with wind turbines, some bits along quiet roads, some along a fence full of crosses placed by pilgrims. i passed a young suffering German lady who started three days ago in Leon, a young French woman,... Oh yes, and I saw Giel the Dutchman who tested out Sally's inflatable mattress last night and was delighted. But still, mostly women on the trail and they are getting younger it seems.

And then as I entered Rabanal I saw this sign which tells me the distance to Cruz de Ferro, the giant cross on top of a steep hill, is a mere 6kms up hill. I was already beat from the day, it being 445pm already. Kathleen had beat me and had found a nice Albergue in town. Sineade had found an Irish gig in town and I went to the chanting church service at 7pm with father Jim instead. I could not possibly walk down the hill to the venue of the Irish singers, no way hosé!

I had a late pilgrim dinner with the lovely, ex CocaCola executive, Veronica from Mexico. Well, she was dining solo next to me, the first time I had dinner alone! But the gregarious Veronica seduced me with her bandaged ankle. Marge and Judy were here having dinner, but had almost finished by the time I showed up. Marge was wearing a WA Bibulman Track hat, which is on my bucket list possibly for next year!

I just read your story! Admired you and enjoyed the Cathedral pictures. I am walking & running too in my new home, very exciting! All is going well! Bye for now, daaaag!