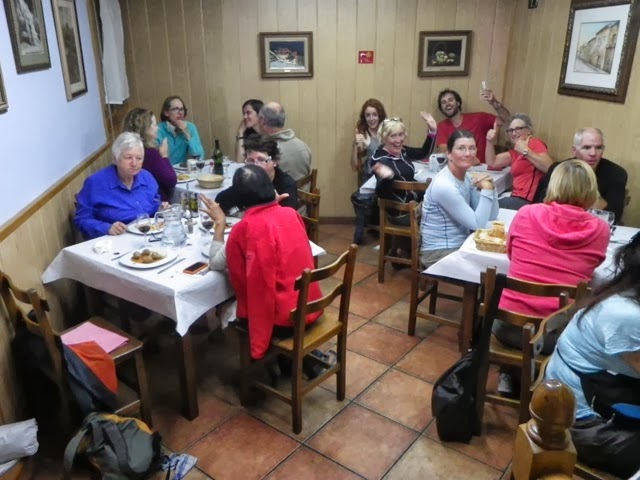 Another pilgrim meal at the local Hornillos del Camino restaurant after drinking all afternoon on their fly infested pavement. Well, actually we drank their drinks and ate their snacks on the steps to the local church (which was locked the few times I tried to gain entry) where there were less flies.
Anyways, here is Manuel our waiter who is solely responsible for the running of the restaurant. He did a great job just like all his other counterparts we have encountered on The Way. 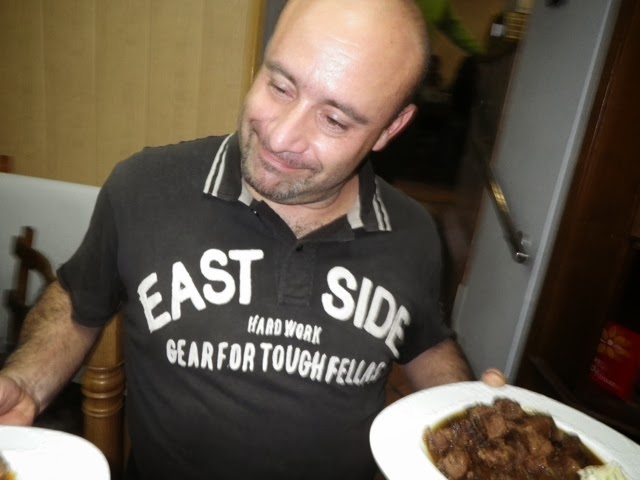 Karina is a little pushed for time, as we had known for a while, and now that we are entering the flat tablelands of the Meseta she decided to follow the other young pilgrims who could walk further than 20kms in a day and who do not have bags to send ahead. We hope to see her again soon somewhere somehow. Carlene got whisked away to a retreat in Spain to recuperate from her injury and Kathleen joined the team again after a week's absence. I tried to call the well advertised local massage service and was told not today as it was Monday. 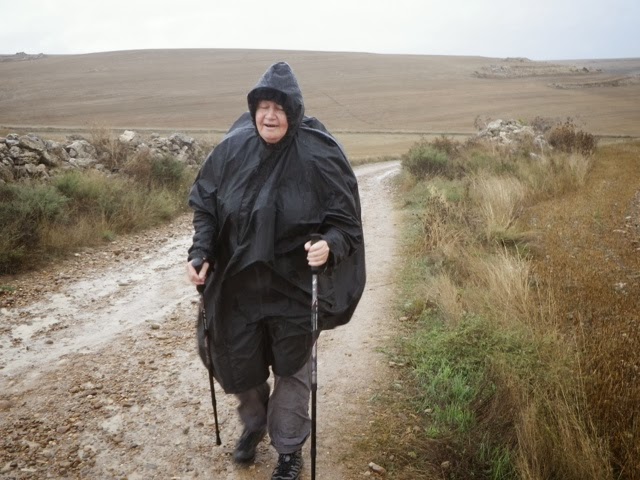 Kathleen started walking with us again, in the rain at 8am this morning. Quite a civilised time as it was raining and the only reason we get away early is generally to avoid the sun. There is not going to be much sun in the next few days according to the forecast. This is a good thing on the Meseta apparently.... Well, apart from the mud perhaps, which made the going a little tough on Kathleen's first day back with the pack.

My first spare poncho was given to a Swedish couple who had misplaced one of theirs, and my second poncho went to a Michelle, pictured below, from California who impressed me by walking in aT-shirt  and Chako sandals. She had lost her rain jacket somewhere. I knew my two spare emergency punchos would come to good use. 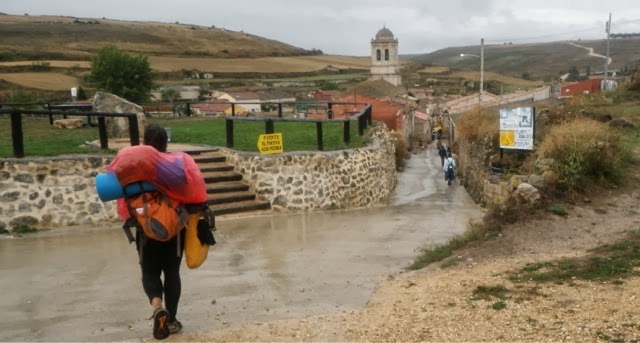 When Kath and I arrived at Hontanas, our halfway point for the day, Rebecca, Jo and Lynda were just leaving. Kath and I took over the shift in the warm cafe with Internet. 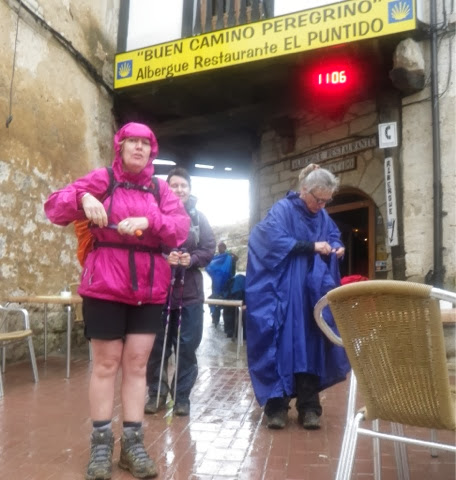 The trail continued to Castrojeriz through wheat fields and gentle inclines and declines and a few historic buildings, arches, ruins,... 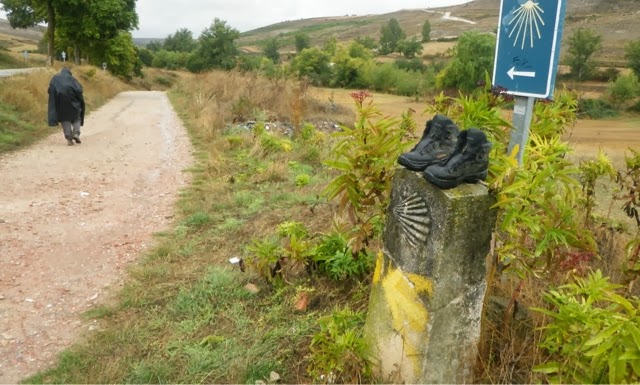 We saw an Italian cyclist who had his 5th puncture in 500kms. He had a hand pump which couldn't pump up his tyres to the correct pressure, so his rear wheel tyre was wearing out and getting pinch punctures. I hope he invests in a new pump soon. He was not having fun. 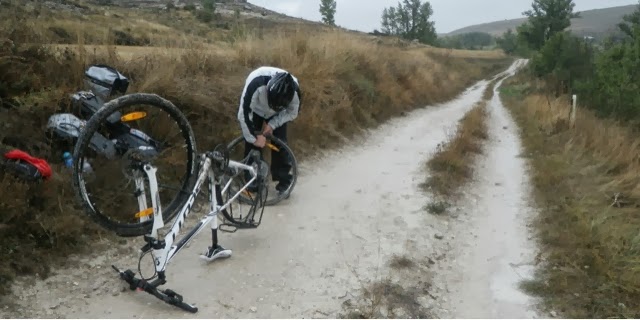 Eventually at about 3pm or so Kath and I arrived at Castrojeriz where our bags were to be dropped at the Refugio on top of the hill which didn't accept bookings. Rebecca and team had found a great little hotel not far away from there after discovering the Refugio was full but had trouble communicating it to us. A series of minor failures caused me to chuck a major tantrum on eventual arrival when it had all become too much for me. Their SMS messages take over an hour to get delivered (no idea how the Woolworth travel sims work, but I will never recommend them to anyone) and SMS messages I sent to them from my Spanish sim don't get to them at all. Then there were directions that involved going down steps in a town that  is made of hundreds of steps, Kath and I separating after meeting Ron a fellow pilgrim chartered to look out for us and who passed the directions to Kath but by the time I got my bag with meds from the Refugio she had gone there and Ron had left assuming he'd done his duty. I was left carrying my heavy bag and my pack in the rain without a clue as where to go but miraculously found Ron in the first hotel I found where I was ready to book a room. Ron took me to the others where I rudely threw my heavy bag on the floor, chucked a tantrum and booked a private room. Rebecca and the team couldn't've found a better hotel, this is absolute luxury at a very favourable rate. Too bad Rebecca's credit card also stopped working for no known reasons and the bank won't answer the phone as it is after hours in Australia.

We all shared a pilgrim meal at 7pm, complete with Father Jim Carty from Sydney, Kelly and her crazy boyfriend Dan (who both stole a shower in my residence), and Ron of course. I paid for the table to repent for my sins, organised and booked another proper hotel for tomorrow and the Jacotrans bag pickup. I hope they will all speak to me again tomorrow.
And did I whinge about the men's toilets yet in this hotel? The toilet lights are on a ten second timer, which means you need to find the secondary light switch twice during your pee into the urinal. Though it is relatively conveniently placed next to the urinal it is not straight forward to operate in the dark, causing the urinating to get a little messy in the process. The second time round I tried the advance pee manoeuvre from the second urinal, meaning I definitely contributed to the wet floor... I hate to be in a cubicle doing a number 2.