Ok, so nobody's perfect, though I'm pretty close; I too am human. This morning I ran out of my slow release insulin. My medicine/postcard bag is currently waiting for me a little far too walk to in one day.
Last night  was pretty average in the stuffy dorm, despite being next to a window. I kept on waking up coughing to find the Frenchman in my section had shut the window again. I didn't know who shut it till 5am when I caught him in the act after I'd opened it for a third time. By then I thought bugger it, almost time to get up. 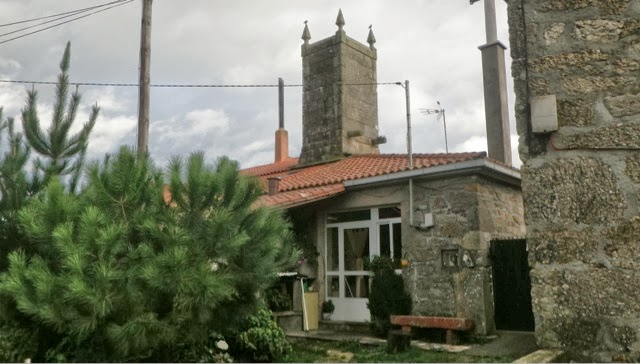 Waking up on the wrong foot is never a good start, so the morning continued to find that the full restaurant upstairs was manned by Manuel on his own. Kath and co. were two thirds done with breaky and I was standing at the bar trying to get a cuppa. After 10 minutes I sat down with my Camino family who were finishing up. Then I had the bright idea to get my 600ml yoghurt drink and banana from downstairs. Sineade wasn't even going to try to get coffee. Both her and Kath weren't feeling too crash hot today either, Wendy barely slept.they had no windows to battle with at all  When I came back up to the breakfast table with my own supplies Manuel came to me with coffee! The others left and I ate Kathleen's leftover toast as well before heading off an hour later. Jim and Jenny were just heading down the street, surprised they weren't the last leaving town and I walked with them till the track went up... There was USA Sarah too, clicking away with her sticks on the rocky forest path heading up. I looked behind and saw hordes of people coming up from behind. The tourists are coming! I yelled and Sarah said she knew, and was determined to stay ahead of these fakes. She clicked forward fast with her sticks.
I coughed and coughed and coughed, let the first busload pass me. They looked at me with pitty as they walked past me in a wide arc. I could feel them thinking this poor pilgrim contracted TB in those disgusting albergues... Who could blame them. As the average tourist was either polish or Asian I had no chance to defend myself.
At the first coffee stop, two hours up the hill, Kath and Sineade were just leaving, I sat with a korean tourist, and watched a small table handle a pile of 100 Camino passports which were all stamped together in bulk for the tour groups every time they stopped. If you only walk from Sarria you need 2-4 stamps a day to qualify for the Compostella certificate apparently, and word was that even us true peregrines were supposed to get a couple each day from now on. I almost feel like just getting my one stamp a day and tempting them to not give it to me. But I'm too old to play games and dutifully getmy thingamajig   stamped at lunch now too. Every man and his dog along the route had a stamp, even those corners where you get an apple for a donation, so little excuse.
The road continued up.and hordes of fakes were overtaking me. Old and young, mostly old. I stopped to apply a bandage as I thought I could feel a blister forming. It was a false call, it was merely an insect bite on my foot. Since I just bought band aids  for the first time on this trip I thought I'd decorate my feet a little  anyways. A Spanish trio made double sure I was ok, making sure there was no language barrier to me seeking their help. Very kind and thoughtful. The other tourists all kept well away from me, the coughing man with the grey beard!!! Yes, a grey beard. Not sure how I turned into Moses, but since i stopped shaving this grey beard had appeared. I guess these things you get plenty of time to get used to.
I stopped a few more times, resisting the temptation to drink alcohol despite seeing Joanne and Steven  recommending the cider on tap in one pace. I had chocolate milk with friendly UK tourists (one from the New Hebrides no less).

Another place I had Galician soup, which took forever to come, but which was very nice. I texted an old mate in Queensland  whilst waiting so waiting a while was not an issue. Wifi is great, almost everywhere!
By the time I slowly made it to Portomarin I'd made new friends with a nice tourist couple from south America who also asked me if I was ok when I sat down for some snacks and testing my blood sugar levels just in case. All was good.
Though the day was tough the last 2kms were good, and I marched into the brand new hostel where Deede and Wendy had checked in. No word from Kathleen and Sineade yet, very worrying as they usually text me in the afternoon. They hadn't been online all day. Wendy eventually ran into them and texted me and shortly after Sineade contacted me. Their phones hadn't been recharged the previous night as there were hardly any power points, so they couldn't even receive my SMS messages. I thought they needed a break of me perhaps. I wasn't feeling well, had even been coughing streaked sputum (blood), which is never a good sign. I asked if I could have a private room in the Alberge and was given one. It was cold and uncomfy, no soap or shampoo, High price and a luke warm shower. I packed up, apologised profusely and left the place after that cold shower. The first hotel I tried didn't do laundry, and the second place i visited i found my Camino family! This place had no single rooms. Sineade came out with me and took the lead finding me a hotel as she saw I wasn't feeling well at all. Eventually we came back to my first hotel again where they treated me like a king. They told me they didn't want money, the second place to give me a free night! I cry again. Luke, the chiropractor from Melbourne, another regular on our trail was sitting there observing the scene. We said Gidday as I left for the pharmacy.
Despite being Sunday the pharmacy was open and they had my insulin, a three months  supply for €80. I called in to the Alberge opposite the hotel to tell the others I was ok and well taken care of and they all came across the road with me to have dinner there with Luke and me. I was glad everyone was ok and made it. I thought I'd be pretty much alone here as the others didn't think they'd go all the way today. I kind of had to as it was the only place that would have a pharmacy, and a hotel room. 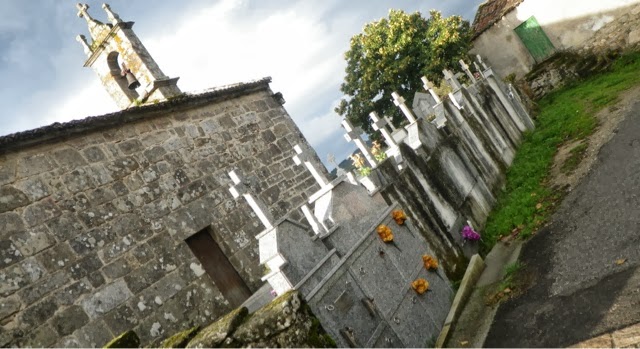 Tomorrow is another day. Getting close to Santiago now. I'll pass my bag again tomorrow and will take out ventolin, postcards, saline and insuline and then sent it on to SANTIAGO!! Wow. Three days of under 25kms to go.
Karina, and Canadian Kelly and Dan texted me to say they arrived today! I think Rebecca and team are arriving tomorrow perhaps. We'll see. I hope they're ok. I don't hear much from them. The Camino at the end is pretty full on!

Clever play on words, "I found a pharmacy with insulin" was the phone call @ about 3am (as Walter knew I wouldn't sleep until I heard he had insulin) didn't tell me you didn't buy it, aarrgh!!! Take care of yourself, maybe time to change antibiotics !!!! Almost there, woo hoo, yay, :o)