Leaving Moratinos was not an easy task, but eventually I joined the masses on the Camino. First Kodak sponsored moment was right outside the door where we saw these little huts in the hill. Father Jim deducted they were not tombs as there were chimneys sticking out of the hills up from each entrance. 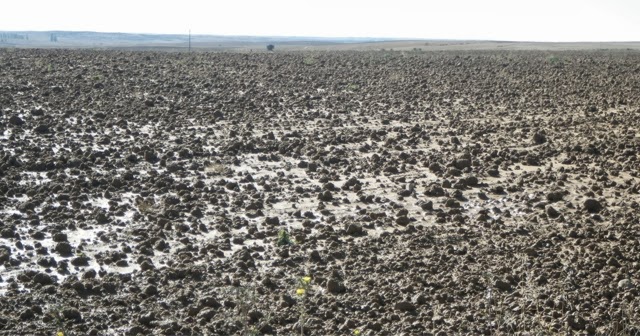 The plains in Spain continue and we treadle steadily along. Walking with Sally till i got to Sahagun where Kathleen had found an Alberge. She texted me to say she'd settled in and was catching the train to Leon the next day. We met up at the busy Playa Mayor in a recommended restaurant. She had a Spanish couple in tow whom she had met in the Alberge. We had the usual pilgrim dinner for lunch deep inside the bowels of a restaurant that had a bustling bar front on the Playa where people were eating prawns and dropping the shells on the floor. The square was full of locals and market stalls. Very colourful and busy. 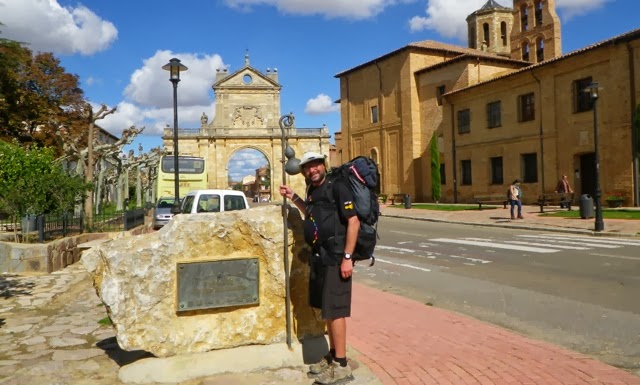 The Spanish couple had their car in Sahagun but were walking to where I was headed, 10kms further on, and were going to catch a cab back to the Alberge Provincial where Kathleen was staying. They took this nice photo of me at the official half way mark on the Camino. Half way between Ronscavelle and Santiago that is, which means as we started in St Jean P de P.   My feet are getting sore, my legs are killing me at night, calves sore, some blisters forming, my gout affected foot is seriously painful at night... I feel like a military hospital patient in Vietnam where I hobble around with crutches after running around battle fields.

Just leaving Sahagun with the elderly Spanish couple who drank beer and wine with their meal, i stopped to change my shoes, and there appears Sally. we walk the same pace, and off we went. Above is Sahagun disappearing in the distance.

Scare crows in the fields...
The Spanish couple beat me to Bercianos, where we found them drinking an aperitifs on a table behind Rebecca, Lynda and Jo. Sally and I were pretty beat. I had a quick beer with the girls before finding an Alberge.

Here is Otto, the German man who is running the hostel for a few weeks. The Alberge is run by a German Camino organisation of volunteers. Stay for a donation, meals provided. Food was cooked by visiting Hungarians, so goulash was on the menu. I hung my wet cloths up on the line for an hour of sun whilst I reclined with a Gin and tonic on my own in a Spanish little cafe.
Dinner...  The Alberge also had a communal sun set watch and prayer, but I'm afraid my prayer was with my gin and tonic. Did I say was crippled? I'm ok walking during the day, but straight after arriving I'm cripple! 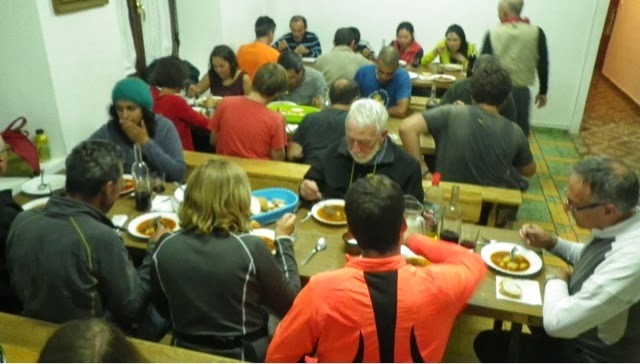