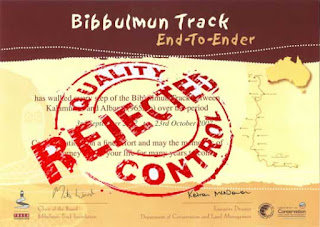 Exactly on schedule Ree, Marilyn and Walter hiked into Kalamunda, the Northern Terminus of the Bibbulmun track! We had hiked 820 kilometers in total (due to the many closed sections we could not walk the entire 1000kms). Walking with us were Judy and Marg, good Camino friends who also joined us on the trail previously. We came to Kalamunda to find a ribbon across the trail. No, not another diversion, this was the finishing line put there by our friend Alastair who was there waiting for us with fellow hiker Phil and his wife who formed the welcoming committee! 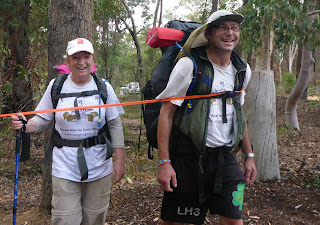 Lots of joy and photos before we proceeded to the tourist office which was hidden in Kalamunda (no more waugals!). We found it and rang the inconspicuous End to End bell hidden in the back of the shop before finding the pub which was conveniently located at the end of the track. Chris also made it for a last beer and a cheers before Alastair drove Marilyn to her caravan where she crashed in the 'old bat cave' and took Ree and me to Darlington for a real bed :) 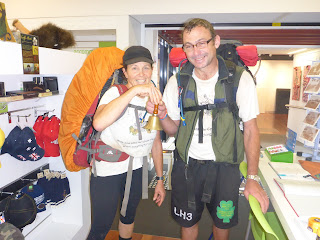 The next day we ventured into the Big Smoke of Perth to find the well hidden office of the Bib Foundation to register our end to end as it helps with their funding to show people are doing it all!

Driving into town and parking was an experience not ideally done after two months of serenity, make that three months if you count the bicycle ride from Tasmania to Albany! But we did it. We found the office, were told it was easier to complete the paperwork and do it on line - after we made the effort to come in. We bought all the Bibbulmun souvenirs available (the metal Waugul, the patch, the car sticker, magnet and the pendant) but could not afford the Bib marked apparel and hiking equipment.

Friday night we had a communal dinner at Chris and Shinomi's home where we also had Eric, Marilyn's husband.  Saturday Marilyn and Eric drove off with the caravan towards Tasmania and Walter and Ree took off to visit friends in the Bunbury area. This was the end!

Not quite the end,.... we arrived back in Tasmania and completed the paperwork for the End to End and I received an email from the Bibbulmun Foundation:

Walter, congratulations on reaching your destination. We hope your goals were achieved.

However I'm afraid we cannot register your walk and issue you with an End-to-Ender badge, and it saddens us because we want to recognise every achievement.

This is because you intentionally ignored signage asking that you do not walk through various closed sections (due to prescribed burning) such as Willow Springs to Brockman Hwy and north through Nerang Campsite. Moreover you flouted the fact that you walked through this section (Nerang to the Powerlines) on social media. With this in particular we, our volunteers, Parks and Wildlife staff and other walkers were not at all impressed.

Sections are closed for your safety  and the advice you were given before your walk (with our trip planning advice) and during your walk was obviously ignored. By doing this you place not only yourself at risk but others as well if indeed we have to perform a search and rescue.

By recognising your End-to-End we would be publicly endorsing what you did and I am afraid we cannot do this......

We completed the Bibbulmun! Alastair had put up a ribbon, fellow hiker Phil and wife was waiting for us, Marge and Judy walked in to escort us for the last three kilometers, Chris came to see us and share a beer. We survived!!!
More on Facebook
Click here to see where we are!
Click to donate to Cystic Fibrosis to show your support!
No comments:

Last walk in from Hewitts Hill campsite to Kalamunda, the northern most end! Past a camel farm, a reference to the El Camino,... And no rain! It rained after we arrived :)
More on Facebook
Click here to see where we are!
Click to donate to Cystic Fibrosis to show your support!
No comments: 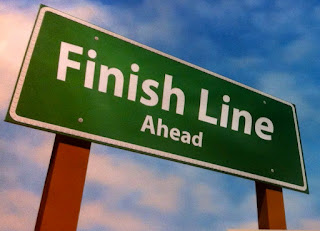 Tomorrow, Wednesday June 3, 1230pm we are expected to walk into the Kalamunda Hotel for a Guinness and lunch!! Come along if you are in the Perth area and show your support for cystic Fibrosis :)

We  have cycled 3500km+ across the Nullarbor and hiked 800km+ along the Bibbulmun track raising awareness for cystic fibrosis and organ donation, and with a little help we can raise $5000 for the CF Association!
No comments:

Ree walking into Waalegh's hut on the Bibbulmun track! We are hiking hut to hut for the last week so it is a 'leisurely' 10-15kms each day now. Only problem is vicinity to Perth, meaning more crowds and more litter. We also had the WA day long weekend to contend with! 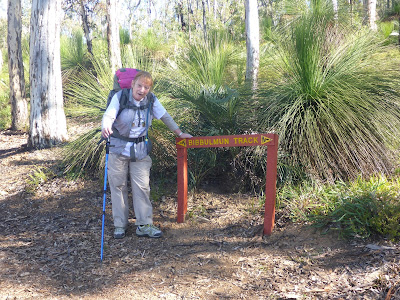 My best mate from Weston Creek high school came to walk with me from Singapore and have me my first fiftieth birthday card and present :) 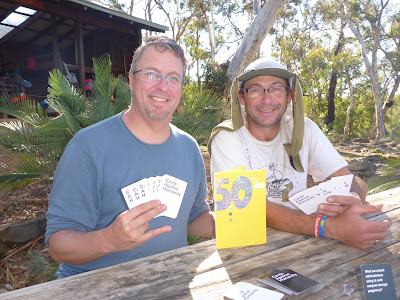 Mundaring Weir at the YHA! Harry got a big smile from the Aseako bike we crossed the Nullarbor with and Ellen made us a huge roast dinner! 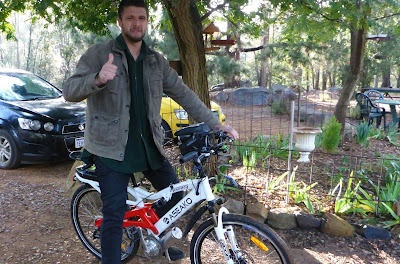 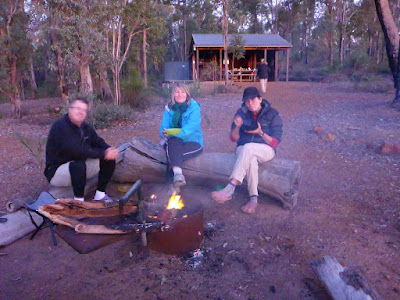 So much has happened in the past few days its been hard to find time to write the blog. Hard to remember everything, it all becomes a Jumbelup in my head...

We had Sharon come over from Sydney and meet us at the Mundaring YHA  where we put the caravan for the week. Ree, my partner, came over from Tassie to walk with us to the end. We all had a night in YHA comfort before our friend Alastair dropped us off the following morning at the Brookton highway access point for the Bib.
From there we hiked past the burned Brookton hut and on to the Mount Dale campsite where Peter from Singapore was going to meet us in the late afternoon. Peter landed after lunch into Perth airport and was getting his cousin to drop him off on the mount Dale road just over two kilometers from the hut.

Turned out the hut was on bypass with a diversion, the signs for which were missing or perhaps vandalised on the Brookton hwy end, which meant we had missed them and walked through a dangerous burned off and still smoldering section, risking death by falling trees.

When I called Peter after dusk he told me he was walking along a firetrail down from Mount Dale, and spoke of 'the' diversion. It all became clear to me and I told him to head back up to mount dale and I would find him. I raced up the track to the firetrail, and fortunately got there just in time to intercept him and bring him to the hut at 8pm. It was a small adventure that could easily have ended up in tears.

Anyways, we now had four in our party. Peter had brought with him my first 50th birthday card and present; a (heavy)politically incorrect crowd sourced card game, which he even offered to carry out for us!

The next morning we got out the danger zone pronto and followed the firetrail diversion on to Beraking campsite not far away where we prepared the firepot for the night, played the new game and enjoyed a relaxing afternoon in the hut, followed by a meal of tinned Irish stew compliments of Peter's backpack.

We enjoyed a pretty sunset and a  cold night and in the morning we headed to Waalegh Campsite. By now it was Saturday of the WA long weekend and the crowds started pouring in slowly. But first a man called Ian showed up with iced coffees and scones for two ladies hiking through. Ian was not staying, he was heading home and left us in charge of the delectable perishables with a description and names of the women.

Sharon had birthday commitments and was supposed to get picked up from the track today. As there were no regular car access points her plans had been changed at the last minute, but because we had a knight in a shining Prado 4WD here, Ian, she jumped aboard and headed for civilisation with him. Amazing how things can work out.

That night almost two dozen people showed up to overnight at Waalegh's and as we were first we got the hut. Everyone else seem to have a tent fortunately. We could've shared the shelter with a few of course, but it wasn't needed. Ree swapped her 0°C sleeping bag with Sharon's -45°C bag so she was going to have warmer nights from now on.

Next morning we left at 830am after queuing for the toilet and making a quick oatmeal breakfast with Starbucks coffees - which Peter had brought in from Singapore!

It was a hilly track to the Helena campsite where we arrived about noon pretty much before the long weekend crowds did. Many were daywalkers coming for lunch, including the WA Bushwalker friends of Sharon! They were expecting to see her on the trail but were glad to hear she was ok. Peter could walk back to Mundaring weir with them, but by now we were playing the politically incorrect card game... About 130pm Peter departed to chase the bushwalkers into Mundaring  to meet his ride to town. Tomorrow morning he flies out again.

And there you are, caught up again. We had 65Roses Day a few days ago as well incidentally. Had I remembered I would've done something special. Ah well.

PLAN IS STILL CURRENT FOR US TO WALK INTO THE PUB AT KALAMUNDA AT 1230PM ON WEDNESDAY 3 JUNE!!!
No comments: