Finally! Another update. I am sure you are all worried about what is happening with this documentary...

I had an Appendicitis Scare in the past few months. Because my lungs are so sensitive/awkward an appendectomy was not performed. Instead, I was first admitted to a regional hospital but eventually went for admission at the Canberra Hospital.  The final outcome; I was twice treated with large doses of IV antibiotics and the appendicitis is gone for now. It is expected to come back, which is totally normal, so they wish for my gut to fully recover and get over the infection before removing it later this year or in January through a laparoscopic procedure.  This means full intubation will not be required if all goes to plan.

I was hoping this situation would perhaps qualify for an emergency TGA approval to improve my lungs with Phage Therapy before the procedure, but due to hesitance of my health providers to fully commit themselves to phage therapy, and the dim outlook of getting TGA approval by the medicos involved, this opportunity has now kind of passed.

But we NEVER GIVE UP! Even though the preferred option of Yale treating me for the documentary seems to have gone out the window, I have formulated a new plan:

In Search of a Phage - The fight against Antibiotic Resistant Infections gets on the road.

In early 2020 I hope to travel to Tbilisi in Georgia. I will go to a pharmacy and ask for a phage preparation to treat my Pseudomonas Aeruginosa lung infection. They may or may not give me something suitable. Chances are they will refer me to the Eliava Institute of Bacteriophages or to a local doctor. I will see what happens and go with the flow for a week, during which I may also visit this legendary institute where the world's largest phage library exists.

Next, I will travel to Wroclaw in Poland, where the next most famous bacteriophage institute is, the Hirszfeld Institute of Immunology and Experimental Therapy.
Here I will do the same, spend a week or so in search of Phage treatment.


And then my last destination is in Brussels where the 'Koningin Astrid Military Hospital' has made leaps and bounds in phage therapy. In Belgium they now allow Phage therapy. My strategy here is to go to a GP and explain what I have done to get rid of my pseudomonas infection. They will do a sputum test and see what is happening with my infection and will prescribe a  magistral preparation and ensure that the infection will definitely be treated and I can go home with an ongoing treatment plan.


I now envisage the documentary as follows:

Hopefully, this documentary will make a big difference to the acceptance of Phages.

Thank you for your patience, hanging in there with me, and please pass to anyone who may be battling Antibiotic-Resistant infections!

Remember the Fundraiser to fund the Documentary is here: https://www.gofundme.com/f/phage-or-fail-with-antibiotics


* "Since time immemorial, phages—the viral parasites of bacteria—have been protecting Earth’s biosphere against bacterial overgrowth. Today, phages could help address the antibiotic resistance crisis that affects all of society"...

** Discovered early 1900s and was replaced by the easier to use Antibiotics except in Russia and Eastbloc countries where Antibiotics were hard to get, hence phage therapy successfully continued there till today. 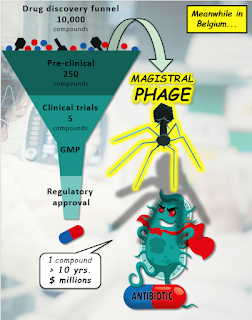 *** Phage therapy does not fit the western clinical trial model as billions of phages exist naturally and each one is only effective against a very specific bacteria. Clinical trials will not work for trials that demand one medicine to be tested on multiple patients. Phages are a tailor-made (often per case) medicine.
No comments: