Cutting a 32km day into two 16km days is theoretically easy. But without the pressure of having to leave you sleep in, you have a relaxed breakfast, waste time, farkel, and... Then when you are about to leave at 1030am... you cant find your phone. The hotel lady has already cleaned your room, but you go look anyways. Find two stray socks under the bed, but no phone. Turn your bags upside down one more time, and yet you do not see the 'milk that is right in front of our nose'. My little bag where I expected it to be in was searched five times too. In the end I try the obvious; fire up the iPad and use the 'find my phone' app. It allows you to emit a loud tone from the phone even if it is in silent mode (which mine seems to permanently be in). My little bag starts bleeping. I toss all the contents out on a bench and there is my iPhone. It is 1130am and I can leave.  Time to see if I can chase father Jim and beat him to Astorga. Jim had breakfast in the hotel and even bought me breakfast! Kathleen and others are waiting for me in Astorga, in an Albergue they found with laundry and complimentary wifi.

There were meant to be two routes to Astorga, the scenic and the not so scenic. I missed the opportunity to take the scenic one and walked along a busy highway on a separate strip of Tarmac which may have once been the old road. It was relatively fast and flat with corn fields and pine plantations on the non-road side. Not unpleasant really if you could block out the traffic noise. There were even some seats strategically placed along the route for peregrines to rest on.

I stopped at a cafe and had coffee with Camino friends including Giel the young Dutchman who fooled me into believing he was an American. Sally was there too. I walk with Sally into Astorga, via another big cross on a hill with  rocks with names and messages on it, and a little teddy bear keying which another mad Dutchman is planting on any memorial he can find where people drop stones, wishes, whatever. His backpack is decorated with dozens of them, there were dozens more when he began his pilgrimage. Just something silly he thought of when he came across the opportunity to buy hundreds of these in one cheap lot.

I read somewhere that pilgrims are divided into two kinds; those that smell the roses and take photos and those that race. I like to belong to the former category. See my proof above.

And at around 3pm Sally, Giel and I arrived in Astorga. Just before arriving Sally sold her inflatable pillow and pneumatic sleeping mat to Giel for a bargain price. Giel had purchased a tent on the Internet and had it delivered to an Albergue a week ago, so this purchase made his kit complete. Sally wasn't using it and was glad to reduce her weight. 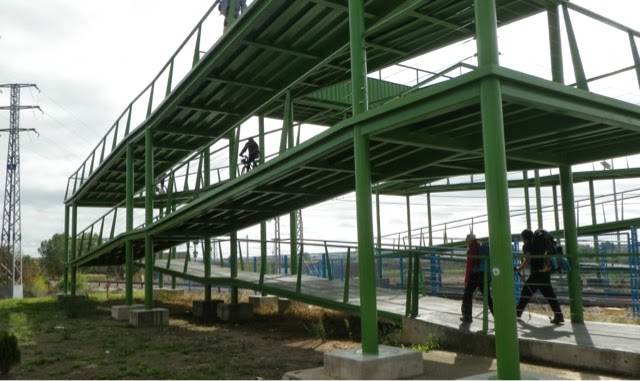 Here was the railway crossing into Town. A most comprehensive structure. After this we had to guess between left and right as there was a lack of arrows, we initially picked the wrong one (even though both went to the old town). When we returned to go in the right direction the trail picked up and pointed us up a steep hill where we found Sineade and Kathleen waiting for us at the Albergue. It was only €5, had a statue of a pilgrim out the front (see below), and a clock tower on top. Very cool. Rooms were small, plenty of toilets too. Showers have no temperature control but are just fine. I found my bag which was delivered by Jacotrans a few days ago too. Miraculously I had randomly chosen this same Albergue as its destination.


Washed a few pairs of socks and threw one out. 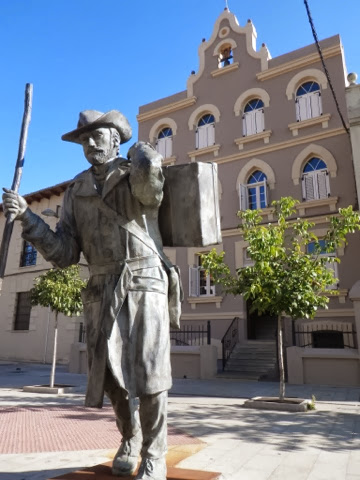 Dinner with the family present and an early night.
Rebecca and team are a day ahead and Karina at least two. Karina is getting a cold, like others en route, plus she had a wasp sting her last night. Rebecca is developing a leg injury. Jo and Lynda are fighting fit. 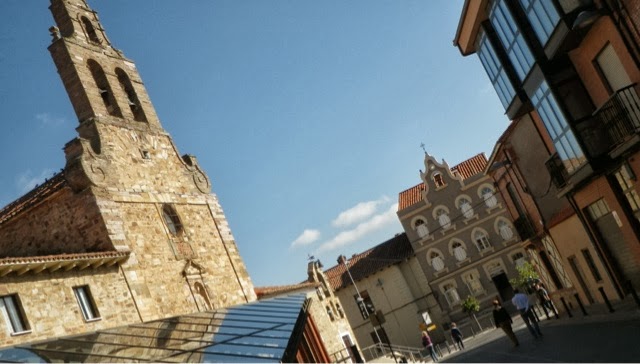 Who is that hairy faced man smelling roses & sitting on seats that Lynda had been on a day prior. What have you done with Walter !!!!! Return him at once, lol.