Staying in a monastery was interesting again. Way too few loos and showers to begin with and rubber covered mattresses (bed wetting proof) in case you don't make it to the loo. The shower cubicle I got eventually was technically in the ladies half and the shower head leaked below the shower part ensuring your clothes etc get washed too. None of these things worry any pilgrim, not for €5 per night. This fee included the singing with the nuns. After the singing session I was not able to also attend the evening mass and instead had drinks with our team and after that pizzas with Ron (London Ontario) and my new friends Karen and Rick from REI (www.rei.com) and Bridget from Seattle. I missed the supermarket this evening, so was ill prepared for breakfast and a long day on the Meseta. Matthew from Houston gave me some fruit and a machine dispensed me a juice container in case there was no breakfast available in the morning.

So come 8am most of us stumbled out of the monastery and hit the trail. Sally from SA joined me for coffee and breakfast in the cafe which was open luckily enough after which we joined the throngs to Santiago. 17kms to the next town, that is a fair walk in the rain. I ended up walking with a young pharmacist from Perth, Matthew, my new North American friends (who also incidentally know all the others such as our team and other Camino buddies), and many others.
I passed Kathleen on the trail, battling along with her backpack, counting her steps. The rain had stopped, and started, and stopped, the sun had come out, clouds had come, rain had come and gone... Wheat fields and wheat fields, small plods of short and quite expired sunflowers And next thing you know there is the Dutch support bus handing out tea to the masses. Theo the group's leader was waiting for his Dutch peregrines but was pouring tea and handing out biscuits to all who passed. Very generous and much appreciated! 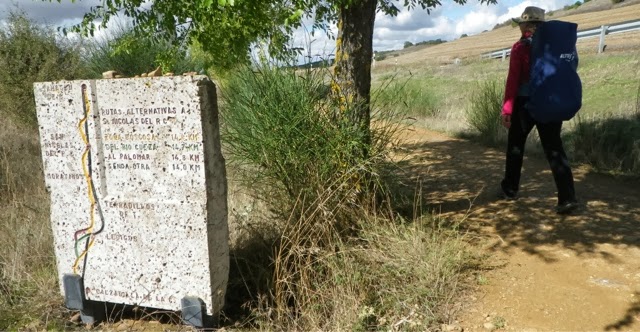 At Calzadilla de la C we all found the one cafe where everyone stopped. This is also where the Dutch people stay, where Sally had also arrived earlier and booked in for the night, and a bunch of other people too. Kathleen made it there, father Jim, Dan and Kelly, Sinead,... Everyone. Apparently Rebecca and crew had only just left minutes before I showed up. After tapas and coffee we drank a large beer. After all, it was only 8 or 9 km or so to go. As there was no wifi Sally changed her mind and unhooked, loosing €10 in the process. Sally and I hit the trail together.
It was a fairly long walk to the end destination, and we ran into an exhausted German lady whom we coached for the next 2kms to Terradillos. There we discovered everything was full and we had to walk on to the next place, another 2kms away. The German girl was offered a bed by a fellow pilgrim who could walk an extra 2kms. So Sally and I charged on and got rained on with lighting exploding above us before arriving at a small lone private Albergue  where we found Ron and a multi lingual attendant who welcomed us. Incredibly friendly. He read my blurb about cf and asked me about my medicine that required refrigeration. Ah, shite, that was brought ahead somewhere. I checked my record and discovered it was brought to an Albergue we'd already passed! I thought I wouldn't get there till tomorrow! The man jumped in his car and drove back to get it for me. The man even did our laundry for €5. Not sure how well it washed as my pillow case was still folded exactly as it had gone into the wash. A gentle cycle I presume. We got the washing back wet and were shown a little rack which I can guarantee you the washing will still be wet tomorrow morning... It was...
We ordered dinner, got health advice about avoiding grains and dairy and eating more nuts and bananas, fruit etc. It came with a recommendation for a book.

Slept in till almost 8pm, a miracle.