Sponsoring The Way of CF

As for every fundraiser organised to date we always hope to find some commercial sponsors. If you believe you are or know someone who could help The Way of CF either with equipment, rental cars, accommodation  or anything at all, then we urge you to contact Walter on sponsors@coughing4cf.com.

Most sponsors receive regular mentions on the blog, mentions in the column on the right and sponsors know that they are indirectly supporting Cystic Fibrosis!

Major sponsors will also feature on magnetic signs on the support vehicle of course (see example below).


Time to start planning for the next adventure!

Plans are firming up for the next Cystic Fibrosis Awareness and Fundraising Adventure. As you may already have heard, we are planning to hike The Way of St.James,  an 800km walking route across Spain.

The current plan sees us start the hike 14 September 2013 in Saint-Jean-Pied-de-Port, in France, near the Spain border, and plan to finish 6 weeks later in Santiago de Compostella in Spain. If we actually walk a bit faster, like normal people who do it in 30 days, we may arrive a week earlier and continue to the edge of the world; Cape Finisterre. We remain flexible.

Anybody interested in packing their backpack and coming along should email Walter (2suffer@coughing4cf.com). I plan to share the cost of a rental car to accommodate those who come along for fun and not necessarily to walk the entire way. This  will also be the support vehicle that carries medications and heavy items and scout out accommodation each day.

As pilgrimage accommodation, the Albergues and Refugios, generally do not allow you to 'hold' places we would likely stay in hotels more often than not, but they shouldn't be too expensive. It will also be off season and the weather will fluctuate between hot and quite cold and wet.

Each walker participating will be raising funds for Cystic Fibrosis with an EverydayHero page!
No comments:

What did we do again?

Walter van Praag left with a group of select friends on a big adventure to raise funds and awareness for Cystic Fibrosis in October 2012. 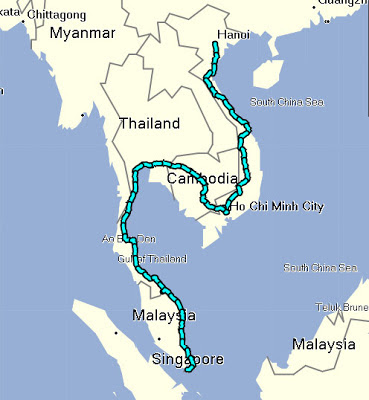 Cycling 5000kms down S.E. Asia in two months by bicycle with or without Cystic Fibrosis is a big ask. So when Zoco sponsored us with electrically assisted bicycles we were more than happy! This effectively meant we had built in tail-wind. Electric assisted bikes require you to pedal in order to activate the battery powered motor; and in all reality 200W does not exactly propel you along. And so three Zoco Rossa electric bicycles and one old style 10 speed bicycle optimistically left Hanoi, Vietnam, with 4 enthusiastic riders, one each from WA, TAS, QLD and ACT, heading South towards Singapore with a solid rain forecast for the next 10 days.

Within days the monsoonal rains started. The chaotic traffic, the terrible roads and the pollution made way for a big warm muddy bath that we were riding through with big busses and trucks splashing us from head to toe as we rode through the foot deep puddles with hidden potholes. The adventure had begun! Three hours into the rain my passport ID photo had washed away in the moisture, but everything else was surviving the deluge. If these electric bicycles survive a week of this kind of torture I would be impressed I seriously thought to myself.

Doing our best to avoid the Vietnam traffic we headed into the hills and onto the Ho Chi Minh trail, a windy and steep but less travel road. I had read reports about severe cold and long distances between towns. Every night we have to charge batteries and my medical equipment needs power too. It is a big risk going into the hills. Despite the electrics we still have to sweat hard in first gear going up the 500m hills. The bikes did amazingly well. They are full suspension bikes and the rough roads were a breeze for them, less so for us riders!

After swapping a team member and regaining strength in HoiAn, where we had a couple of rest days, we continued into the real mountains. These mountain ranges are well over 1000m high and very remote. The bikes kept on working well. The next few weeks were hard going, but we gained fitness and skill on the bicycles by the time we reached Ho Chi Minh (HCM). Cycling through HCM City is unbelievable. Motorbikes randomly pull up alongside us asking us what we are doing as we ride along with the billions of other road users, none of whom obey any rules. An eye opener to say the least.

We have a rest day in HCM and swap another team member – not everyone can just take a two months break off work! We had postcards explaining in Vietnamese language what we were doing for Cystic Fibrosis. After cycling past the war tunnels in Chu Chi, and almost dying in one of the original ones when I wormed my way into the airless tunnel, we left Vietnam and entered Cambodia.

In Vietnam we had the luxury of a subsidised support vehicle, but for Cambodia we only had a willing volunteer with us who caught taxis each day with our luggage. It is excellent to have someone local to help find hotels and help us every day. Cambodia was mostly flat. The flooding they just had was still clearly visible with most fields and many homes pretty much inundated. We had a rest day in Pnom Penh and visited an orphanage before continuing into Khmer Rouge territory north of Tonlé Sap, the largest fresh water body in SE Asia, a place we were advised to not cycle… An elderly gentleman pulled up alongside us on his scooter and welcomed us to Cambodia and thanked us for visiting!

Some amazing rainstorms and many random acts of kindness later we arrived at Siem Reap and Angkor Wat, the largest religious monument in the world. Time for another break before we head into Thailand, swap another rider and face the pollution and the chaotic traffic of Bangkok.

Crossing the borders with a totally washed out passport photo fortunately appeared not to be of any hindrance, and furthermore our luggage was typically ferried across without us even seeing it. In Thailand we had to change to left hand drive traffic and say goodbye to our friendly Cambodian guide. We just had to hire taxis from now on to carry our luggage from town to town and hope it would arrive in the pre-determined hotels and that those hotels were indeed where they were shown on the map. This caused us quite a few hiccups as you can imagine, and we had to cycle well into dark on rainy nights and do some detective work to locate our hotels and sometimes our luggage! Once the taxi had left with our belongings we were committed to going to that same destination no matter what happened to us during the day, rain or shine we had to get to our bags at night.

Cycling the 400 kilometers past and through Bangkok was probably the most horrific riding ever. But after turning South and to the Gulf of Thailand coast the heavy traffic and pollution was soon forgotten. The cycling was fantastic without too many hills and decent roads, great views and wonderful people.

At times the roads we chose to take were washed away by tsunamis or did not exist, some were goat tracks and some turned out to be busy highways – lines on a map rarely giving us enough information. Similarly with hotels. Some expensive ones turned out to be lousy and other cheap ones were terrific. Language was always a barrier, especially at meal times when you could never get much beyond fried rice or noodle soup as whatever we pointed at or mimed to waitresses was typically misunderstood. If all went well then the complication of having one vegetarian with us would miraculously mess up the orders for everyone through confusion.

Despite the Do Not Travel warnings from foreign affairs we followed the coast down to the ‘Greater Patani’ in the South of Thailand. As we approached the Muslim provinces the police posts became more frequent, and eventually made way for military posts and military zones. The road blocks in the South eventually comprised of camouflaged netting with army tanks underneath them, razor wire and fully armed soldiers. We were waved at and saluted, but were forbidden to take photos. As everyone seemed so friendly and accommodating to us we saw no reason to head West where we knew we would face heavy traffic and big cities.

We continued on and crossed into Malaysia a few days after our visas had expired – we cycled as fast as we could! It took a few hours to pay and process our fines. Our average speed was typically 20kmph and 100kms per day. Because of the rush through Thailand due to our 14 day visa to cover 1500kms we did not rest much and gotten ahead of our schedule. This meant we could find comfy places for mini-holidays along the East Malaysian peninsula as we approached Singapore. Although the area was pretty much alcohol free we managed to find the occasional beer here and there and enjoyed our last few weeks of cycling before jubilantly crossing into Singapore via the most obscure ferry crossing from Kampung Belungkor to the Changi ferry terminal. The last day’s ride we had a few friends come along to ride with us to the Hollandse Club in Singapore where we were treated to a royal welcome by a small crowd. Singapore was very excited about our effort and we got into their newspapers and even treated to a 12 minute interview on their Asia News Network which is broadcasted worldwide: www.bit.ly/CFrideAsia

We raised almost $10k for CF Australia and almost $2k for CF Tasmania, and gained plenty of world publicity! Photos can be seen here: www.bit.ly/viet2sing. Bring on the next adventure!!