Losing everything but my Reliegos

We left the German run Alberge early in the morning.... Well it seemed early, but in fact we were amongst the last to leave. Stumbling in the dark, wondering wether to dig out a torch or bear it out. Slowly and quite predictably the sun came up slowly over the Meseta.
Sunsets and sunrises are always asking to be photographed and mostly I resist the temptation. But today I fell for them.

After the sun came up we walked past a wall with ripe passion fruits and some nice passionfruit flowers...

Dying for a number 2 and breakfast we eventually stumbled upon the township of Calzada the Camino went right through without passing anything open. It was Sunday I realised. A quick search of the village revealed two open cafés slightly off the track, where we found the usual suspects having coffee... Sinead, the Korean tall man,... We spent an hour using the wifi before wondering further along the Meseta.
Past some ancient relics,... 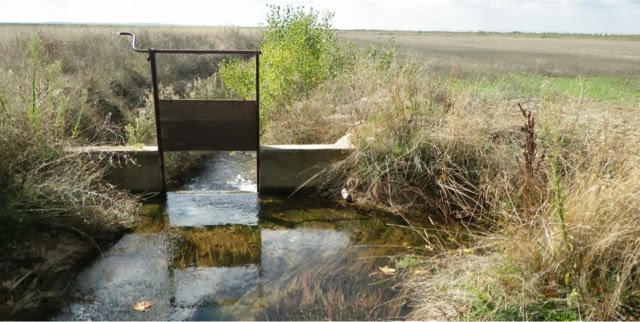 All worthy a stop for 10 minutes of course. We even came across the Dutch bus with Theo who was farkeling in preparation of his Dutch troop. He immediately opened the doors of the van and greeted us with iced tea.
A couple walked up to me when I swapped my shoes for the Vibram five fingers, asking if I lost my glasses. No I said, ahum,..ah, well, actually,... Here they are they said. Sigh. Wally.
We walked on, counting the miles now, to Reliegos our next coffee stop. Another long break there before we finally hit the trail to do the last 5km of the 26kms to Mansilla de las Mulas for the night. Walking past some exercise equipment I energetically did a quick workout - ensuring I will look fit and strong on arrival in Santiago later this month.

Oh hang on, is that one shoe on my pack? Shouldn't there be two?? Where is my right shoe? 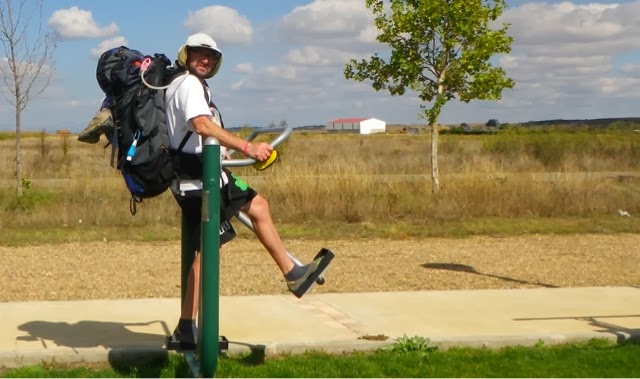 And so I said my farewell to Sally again as I headed East, against the grain, in search of my shoe. I saw the Dutch ladies (who suggested I call Theo with the van), another Dutchman, a German, a Spanish man,... All told me they'd seen a discarded shoe along the trail... About 4-5kms back...
At the cafe I asked for a taxi. No taxi. Well, I only had about €5 left in my wallet so that saved me that complication. Left my pack and backtracked.
Then Theo appeared with the Dutch bus. Have you seen 'Ankie'? Yes, I said and told him where she was. And why am I walking in the wrong direction? Theo said he'd be back. And within 10 minutes he was back. I jumped in, we drove back, asked some peregrines after driving 3kms or so and they said 'yes, just there!' pointing 50 meters back. There was my shoe.
Theo dropped me back at my pack and joining forces with my lovely pharmacist friend Jil who'd walked 30+ today already. She stopped at a Refugio and I dragged my sorry self to Mansilla de las Mulas listening to my podcasts. No pilgrims left at this late time.
Arriving just on 5pm I found everyone booked into the same hotel. Rebecca and the girls, the Dutch group, Sally, Ron,... We were all together again. Even had dinner with Rory, Bob, Divina, John from Sydney,.... And tomorrow we walk into Leon for a rest stop!

Ah Wally what to say, when one doesn't realise they aren't even wearing their glasses, OooMmmGgg!!
Lucky we love ya for your good lookes & sense of humour, na scratch the last one, was trying to add to the love ya for list, ROFLMAO, xxxx ;)
Keep going strong, fitness equipment on the Camino ?????