I am hoping to print this blog for fun, using one of the blog-to-print services. These services allow you to edit content and add/delete bits, so in effect it becomes a cool little memory book. During the camino there was one special Camino Family member called Sally who traveled with me the week of the Meseta. Sally is a writer and a massage therapist, and like me she was in no hurry and was there to enjoy the walk.Being a writer I thought I'd ask her for a little preface to the book. This is the most beautiful preface she wrote for me. Even if the book doesn't happen, this will:
_____________________________________________________

Following years of dreaming and insane training and planning in the height of Darwin's wet season for several months, my Camino finally transpired (as opposed to perspired) in early September 2013. But that is where the strategising ended, for to walk 'The Way', one must expect the unexpected. I fell naturally into the slipstream of serendipity, synchronicity and the magical, with the often narrow, winding paths always disappearing around a mysterious bend or corner as the symbolism of life on this path.

On a day shrouded in ethereal mist, I would often think of the slipping in and out of reality. One such occasion involved a toilet stop behind the ubiquitous blackberry bushes lining the route of much of the Camino, from which I had been plucking, probably also causing the frequent stops. I was in squatting mode when suddenly, a preposterously bright lime green and blue lizard shot out from underneath me. I thought maybe the consumption of too many blackberries had hallucinogenic effects too. So how does this link to Walter?

I had heard along the 'blackberry vine', that a crazy Tasmanian was somewhere out there on the Camino, raising awareness for Cystic Fibrosis as a sufferer himself. Everybody had met him but me it seemed. I had been walking with Ron from Canada for the day, and had thoroughly enjoyed his company. We stopped at the village of Ages for eats and sleep, heading for the albergue. Coming down for the Pilgrim's dinner, we walked into the dining area and a loud cry went up for Ron. A group of pilgrims all sitting at the one table hadn't seen him for a few days and were obviously pleased to reconnect. He then told me who they were. Walter and his harem.

Ron and I chatted away, and it started to rain, filling the air with the perfume of satiated dry earth. I excitedly went to the window to lean out for some lung fulls, and when I turned away, noticed a poster of the local wildlife on the wall. I cried out, "That's the lizard!", which Walter heard, and intrigued, came over to our table. Judging by his striped, non matching socks and the t-shirt with the map of Tasmania in the unmentionable position (hint....looks like some female anatomy), I knew this was an interesting character and with the admiration of him walking with limited lung function, offered him a foot treatment in my capacity as massage therapist looking out for my fellow pilgrims. I even had a collapsible bucket on board for him to soak his feet in. Saying goodbye, and wishing him luck, I went on my way, but who should walk into the dining room of a bar a few villages down the track, and invite himself to dinner? Initially annoyed because I wanted to write my blog , I was soon won over, and we agreed to meet the next morning to walk together for the day.

'The day' turned into eight, across the dreaded Meseta, which is flat and often treeless. I hate to emphasise it too much, but Walter and I loved this section and thought it was the best as we laughed, talked, ribbed, stopped to look at the marvels of nature, horsed around, opened our hearts and minds and souls, and when I had had enough, which was once, made Walter tune into his podcasts of Richard Fidler, the great ABC interviewer. But amongst all of this, was his unwavering kindness towards his fellow pilgrim, his extended love to mankind all woven in and around and through his necessary routine to stay alive. He shared so readily wanting to order plates of food for all at stops along the way and I told him he was one of the funniest men I had ever met. And to be one of the funniest men, one also has to be intelligent, and I loved his fierce intellect. And if that wasn't enough of a find, he regaled me with his outrageous stories of his adventures, except they were all true!

Life on the Camino is over as such for me, but I will always have the greatest admiration for Walter, who was carrying a far heavier pack than most, physically and metaphorically, weighted down with all of his medications and the added complications of sending his excess medicines ahead. Not only that but he walked every step, and then not too surprisingly carried on to Finisterre, the ancient site of Druidic origin overlaid with the Christian Camino significance. Not many pilgrims carry on from Santiago to there, and one receives a separate Compostella in recognition.

I call it my gift from the Camino. The gift of meeting Walter, and the privilege to walk beside him and write this preface for what will be a very entertaining, inspirational and inciteful read.

A quote comes to mind, which accompanied a beautiful photo (see below) in an exhibition I stumbled upon of pilgrims on their journeys.....'Don't walk behind me, I don't want to be your guide. Don't walk ahead of me, I cannot follow you. Walk beside me and I will be your friend.' 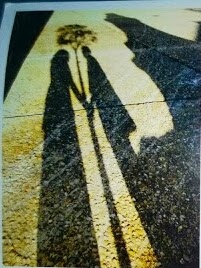 All is well that ends well! 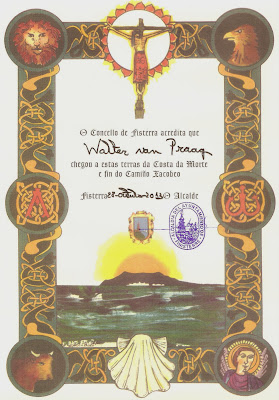 Here is the much coveted certificate, the pagan document I received in Finisterre to warrant that I completed the pilgrimage from the French Pyrenees across Spain to the Atlantic Ocean.

But to me the below photo is what signifies the end of my pilgrimage, the last flight home, the Dash-8 which took me from Melbourne back to Devonport! 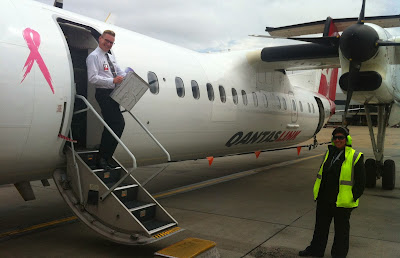 The best thing is of course that we reached our $10,000 goal for Cystic Fibrosis!!
In fact, through the Everyday Hero page we have so far (you can still donate I believe if you are quick) raised a total of $10444, of which $6354 went to CF Australia and $4090 went to CF Tasmania!

Now for the next adventure. Any ideas???