So lots of considering about where we stood with the team at night resulted in me coming up with the natural solution like we had kind of planned for before we started. We knew we had to occasionally come to a point during the 6 weeks where the Camino would separate us. I had no idea it would be so hard. But it was bloody hard. It was like breaking up the team, whereas of course that is not what it is, it is just having some time out, and not worrying about each other, wallowing in the Camino experience. As I had read in the half a dozen of books this often happens at the Meseta. Surely this is exactly as it happened. In Burgos, right at the start of the Meseta, things had started to go wrong. It was now time to make some changes, and I could barely sleep in my luxury hotel room as I was pondering on what was best for us to do.
I figured it was best for me to load up my backpack with meds and nebuliser and eventually decide where I was staying myself at night for a while. I could send my ittle bag a day and a half ahead for me to raid when passing and send it a few days up the track ahead of me. The way I was going I was making a huge nuisance of myself not just to my team mates but everyone near me. At breakfast I found my solution was universally accepted.  I for one needed to do some soul searching on this Meseta...
In the morning. Kathleen and I dragged our asses up the big hill outside Castrojeriz and headed on our 26km day to a little hotel we'd  booked for us altogether in Fromista. My pack must surely exceed 15kg now. Bloody heavy... 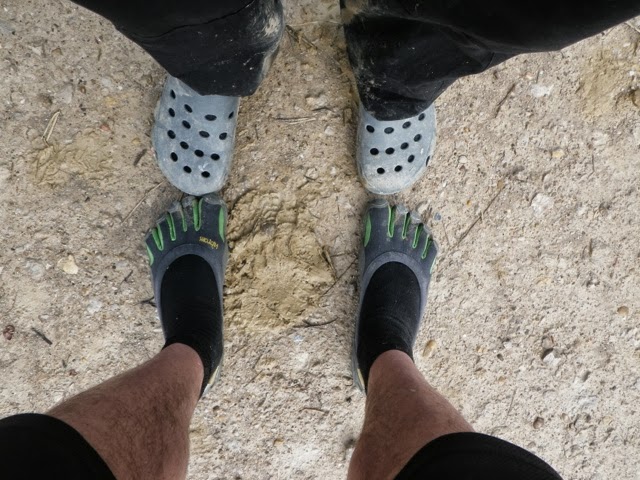 After lunch I found myself walking with Gerhard from Austria. I was walking in my Vibram five finger shoes and he was wearing his Crocs! His girlfriend made him leave them at home, but after getting Achilles injuries and blisters he went and bought himself a new pair, and worn it happily for the past three days. We walked briskly for the next 15kms through rain and mud to Fromista. Kathleen found a walking partner and they both jumped in a cab for the last 5kms or so. Remember that Kathleen is carrying her pack! 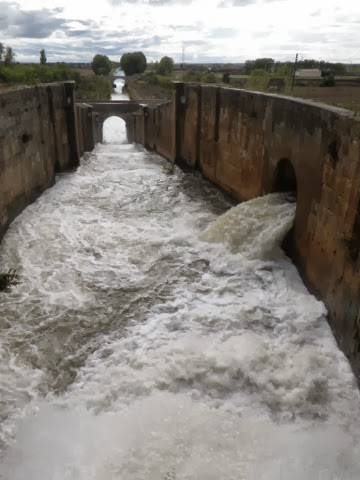 Coming into Fromista you walk along a canal for a few miles before crossing at a lick. Very cool.
Halfway during the day I walked past a peregrine hospital in some historic building, and met a Dutch lady there. I gave her a bunch of cards for her Dutch group. There were 9 of them in an organised bus trip, with hotels and transport arranged. They were walking 30+kms a day and have two octarians in their group, with the youngest  of the 9 roughly my age. Impressive.
So anyways, the team had arrived pretty much in a sequence that amazingly saw us all leaving the hotel at the same time looking for a drink. I ran into a sign for a spa/massage and rang the bell. Before I could say anything I was pulled in and given a shower, a spa and a relaxing one hour massage for an agreeable price from a very friendly Bolivian woman called Mau: http://oasisfromistaspa.blogspot.com.es/   High recommendations from me.
By now it was suddenly past 8pm and i had lost my team. No doubt they were having dinner somewhere with Camino family, and I first checked out our hotel restaurant.  There were the Dutch people having dinner, and there was the South Australian Sally who'd given me a foot massage last week, she just started eating dinner on her own... So there was my peregrine dinner company and my after dinner drinks with the Dutch group who were keen to hear my CF experience. So nice to speak to Dutch people!! Love being Dutch born.
Nine thirty I returned to the hotel to find the others just returned as well. Tomorrow another day.