Down to earth, down to Sarria

I arrived at Fonfria about 655pm. Dinner was at 7pm. I spotted the credit card machine and asked if I could pay using my card. Later I was told... I was shown to my dormitory bed. Past a bar, a lavish lounge with foot massager, through a dormitory with wooden bunks made in old fashioned tree house style out of timber branches, and into a dorm with beautiful modern beds. The bottom beds were doubles and a single one on top. I was assigned a double bed near a Powerpoint next to a double bed with two kids asleep. I dropped my pack and rushed down the hill to a round yurt type building which was the dining room. I found Deede and Wendy and sat next to them for dinner. Spinach and bean soup, meat and rice, cake and loads of red wine (I drink water now...). I gave my post cards to clueless diners and broke into my CF talk to a couple of Aussies across from me. Dinner was great. Also met a few Danish people here. My spiel to Danish  people is to edumecate them about the 'map of Tassie' and how that looks like the public hair of a woman. ,princess Mary is from Tassie. I of course have two shirts with me which show the map of Tassie right on the bottom, in the appropriate location (one which even says it is not Brazilian down there but all natural). These are both if course hash house harrier shirts... 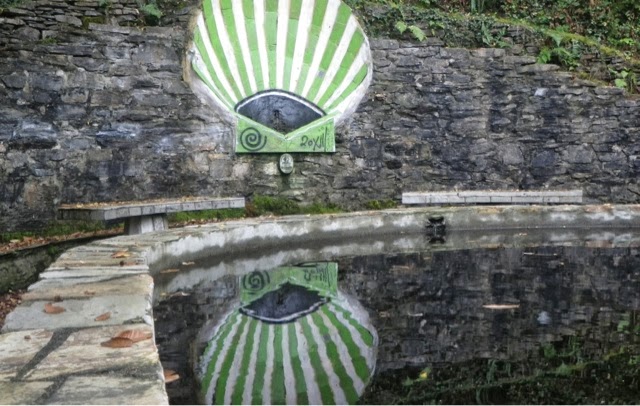 At 830pm I coughed back up the steep hill back to the main Albergue where I offered to do my credit card transaction over a glass of Spanish cider. The woman called the man, the man stuffed around,... And then he said it was all free. No charge for dinner or bed, and here is an additional €20 because your cause is so great. Turns out his father suffers from MS and he was so impressed with my effort he did not take no for an answer. I teared up immediately and told him that was not necessary and please let me pay. There are lots of people with disabilities more deserving than me... He wouldn't have a bar of it. I then tried to pay for the banana I took from the bar, but the lady there said she was told not to accept money from me. I retreated back to Wendy who was dictating into her phone in a very articulate USA manner, and i broke out in tears telling her. I finished my cider and went to my dorm.
It was 920pm by now and my dorm was deathly quiet.  No idea why, but people were not talking. I unpacked my meds and my pack in general and got the nebuliser out. Noticing  some dirty looks from people when I turned it on. The lights were turned off at 945pm and I kept going with my nebs using my headlight, trying to be quiet doing a quick routine. By 10pm I turned it all off and went to sleep...
At 645am I woke up, after three or four pees during the night. Each pee made me stumble with sore foot and legs stumbling over the packs in the thorough way to the only toilet I knew that was in the dorm. I exclaimed it was 645am, but no one said a word. They were all fumbling in the dark. I got up to go for another pee but of course it was occupied. I looked outside the dorm. I then asked a woman if there were any other toilets. She shrieked and ducked and said 'no speak English'. Other people hissed at me and said 'shhh there's children asleep here' and so I turned on the lights. It's 7am guys, breaky is at 7am, we're in an Albergue on the Camino! I commenced my coughing and as the last sleeping bodies emerged from their blankets  I noticed there were about 7 children. I could be wrong, as one german family was here with 5 kids. Whatever, I counted 7 brats.
I found one lady who spoke English. She explained how people were offended by me farkeling  at night and coughing and how she had explained she thought I had CF (wow!!). I gave her my cards and explained I wasn't doing the nebs for fun, sitting there surrounded by my insulin pens and meds.
Breakfast with Wendy and Deede, Alex from S.Korea was around too I noticed. I handed out CF cards to offended people and made amends. It was 8am when I left.

I got lost a few times, each time down a steep track which I had to walk up again. One I persevered cause I saw people ahead, but these people eventually came back up too. The others climb up effortlessly whereas i cough my guts out as you know, and take forever. Half of them know me. I stopped at the next place that served coffee, gave cards to the few that didn't know me yet. And I continued the descent. I had brunch with Wendy and Deede in one cafe. One time when I got lost today I had walked along this road thinking how it fitted the expected profile perfectly but I hate walking on Tarmac and hadn't seen any peregrines nor yellow arrows... I stopped for nuts and lollies and no one passed me. I walked back and called Ree at home. She checked the Brierly book/bible and assured me I did have to follow a road. Just then the German family with five kids came up... Each time I took a forty minute detour they caught up with me. Most annoying. Friendly chirpy kids and mum darting around effortless with dad carting up a trolley with 2 tonnes worth of belongings - also effortlessly. Hate! And they are so nice to boot. I'd given them all a postcard earlier too. Anyways, I mounted my 14kg backpack and ran for it.
One point the track split up to go to Samos, where the biggest European monastery was. I consciously went right directly towards Sarria, but somehow ended up walking up a Tarmac road which apparently went to Samos. After a mile I realised and turned back again. Well, Ruth the Canadian lady came down and said 'hi Walter, are you heading for Samos'... It is truly amazing how we all know each other. Even me with my sad memory for names remember all these people's names!
So today was not a good day for me, despite offering beautiful scenery and mostly downhill (which I prefer!). Fortunately after I called Ree to check the book which Rebecca had kindly left with me in Tasmania, Ree vowed to keep the book on her person, even in the toilet, in case I would call for directions. She kept me abreast of the track for the next 10 miles.
It was mostly downhill, but the bits that went up sure hurt and seemed to last forever. By the time I got to a town that I had hoped would give me coffee all I found was a coke machine (see above pic).
Some of the tracks I walked on were ancient tracks worn deep into the rock, seemingly into a tunnel! Great views of Sarria in the distance at times, looking very distant indeed!

After a long while, and a few stop for nuts, lollies and muesli bars I finally found a proper coffee stop where I got a roll with prosciutto and coffee con Leche. It was becoming yet another long drawn out day. Hardly any people on the Camino. No idea where people disappear too. Sometimes it is thick of them, other times there's none anywhere and you think you're off track. 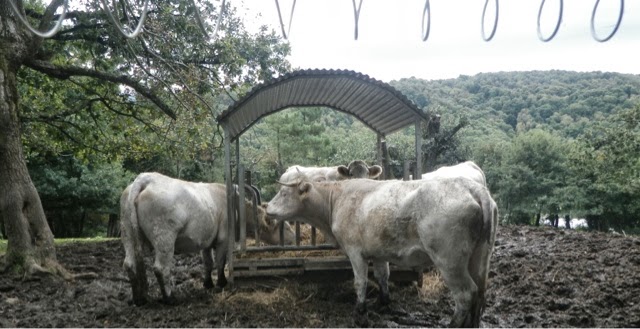 During this lunch break I read on Facebook how Ree told people I had remained dry all the time, and within minutes of reading it the rain set in. I got my aging Pataguci jacket out and my backpack cover and walked the last hour in the rain to Alberge Paloma y Leña where my meds/cards bag was sent to. It was a lovely Albergue too, just 3km from Sarria. Of course I happen to know all the people there, at least 80% of them. Even Alex came in. All I did was talk to my friends about CF and decided on where to sent my bag to next. The Albergue  lady was very friendly and made the calls for me, despite me not staying there. I left lots of postcards before heading back into the rain to Sarria proper. And to think I didn't even have a hot drink there (available free to any peregrines).
People always ask me if the rain and cold aren't bad for me. I explain it is pollution that kills me, or at least makes me cough up blood! I have good rainwear and don't mind waking in the rain. Least of my problems! I enjoy it if anything. Nonetheless people thought I was very brave going back into the rain to  walk another 3kms to Sarria.
As I walked in and checked my phone re where Kath and Sinead were I was passed by a fit young woman. Colleen from Canada. She'd done the Camino 3x and loved it. An ex teacher from BC, gone AWOL to walk the Camino again. She even offered to carry my backpack up the ancient stairs!
I found a perfect hotel with €15 single rooms and booked in. Met Kath and Sineade and Jim for dinner and enjoyed after dinner drinks with Colleen who showed her snout in the same place. Then a stranger bought us drinks, he and I had taken each others' photos on top of the big mountain the day before. But of course it took me 20 minutes to remember him. He is a lovely Spanish guy whose name escapes me again.... Next time I'll buy him a beer! He was brought up near the Pyrenees and loves the Camino himself.
Time to retreat to my hotel and do my nebs. Maybe put a euro in the machine to get a beer and do some blogging first....