Today is truly my last day's walking the Camino. I will be reaching the end today. This is it. So not wanting to rush into my day I had a leisurely breakfast in Sardiñeiro with Niall and Oonagh before leaving at a very acceptable time and with ample blue skies. Given the forecast was for rain we were particularly delighted. And so we happily saundered up and over the hill for our final descend into Finisterre. From the top of the ridge we could already see Finisterre, and Mobte Fache, the hill behind it  clearly, a beautiful sight, the end of our journey lies there.

It was a steep track that took us to a beach which was to be our final approach to Finisterre. A quick photo before we start the beach walk; 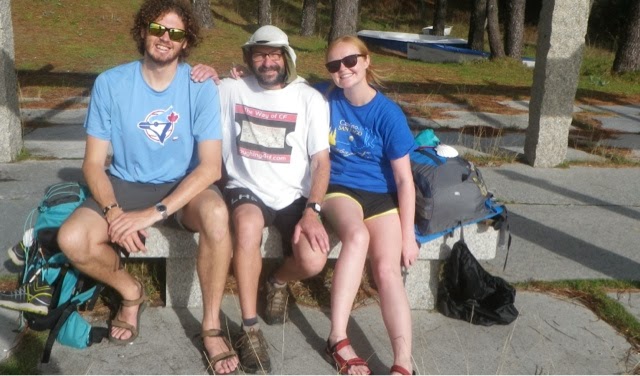 The beach was full of litter. In 2003 this beach was covered in oil after the Prestige oil tanker sank and broke up. Within a year of the spill the very successful cleanup had made these beaches amongst the cleanest in Europe, but by the looks of it that is now passed tense. We saw a dead dolphin, dead seabirds, a dead rat,... Signs of civilisation?? 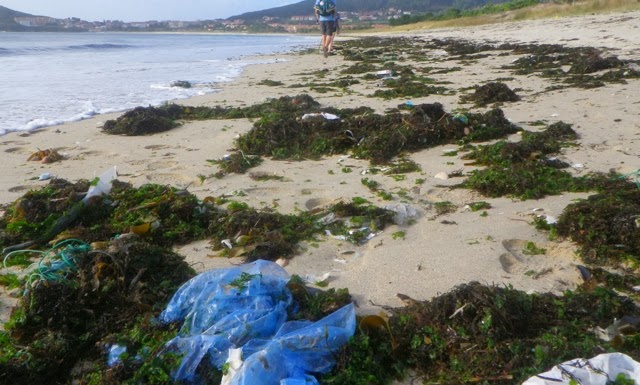 But none the less, it was pretty cool walking along the beach. The actual yellow arrows of the Camino were on a parallel track, but on a day this nice we had to walk the beach.

In accordance with dubious tradition Niall and I had to quickly do the pagan thing, skinny dip in the Atlantic. We decided not to burn our cloths here, a recent tradition. Timid is everything, as we had barely regained our modesty  two women came walking up the beach yelling my name. It was Sarah and Anna. Both had walked with Karina, and Sarah I had met in Burgos where she joined 'our family'. She had also added the FitBit app to her phone so I could sync my FitBit occasionally. This means I could now sync it again for the study. The FitBit is a fancy electronic pedometer which I have worn the entire trip for a cystic fibrosis  related study correlating well being with activity. I can see my position in the field of 30 participants and I am on top of the leader board no matter which way you look at it. It was probably not expected anyone would walk 900 kilometres during the study!

In Finisterre we all found respective accommodation, me in a little hotel, the others In an Alberge, before meeting again for lunch. During this time we ran into various familiar faces again that we were pleased to see. They included Kerry, Charlene, Ken, Birgitta, Claire,... Why always so many women! Harden up men, the Camino needs you! 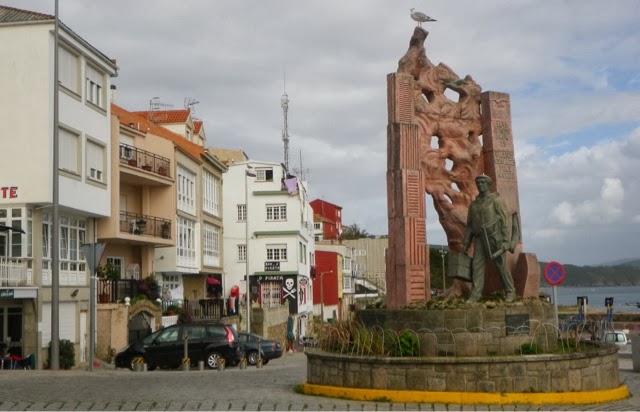 After lunch many of them took the 3pm bus back to Santiago. So glad I just saw them, total coincidence, or was it???? The Camino 'provides' we say. Below is Sarah and Anna before jumping on the bus. 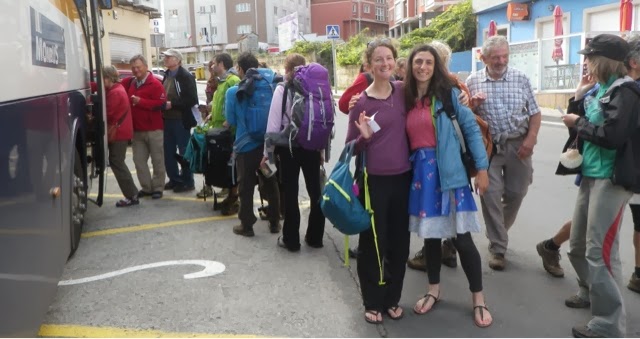 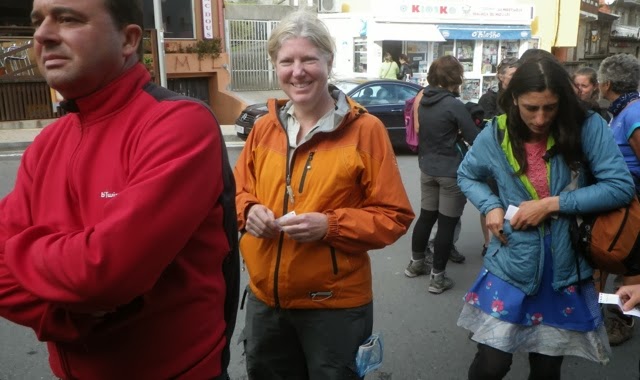 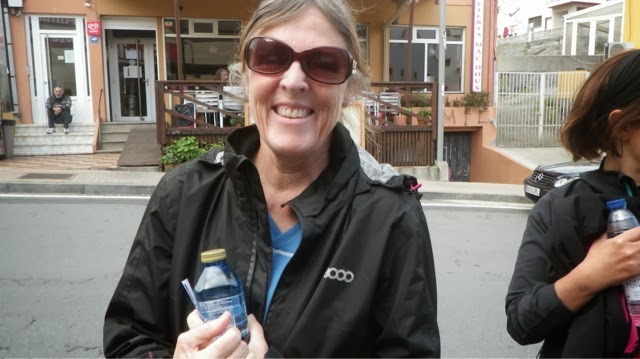 Come 4pm we all had enough lunch and beer to go for a walk. I made a head start, assuming the others would catch me. But without a pack it was sooo much easier walking up the hill, it was virtually effortless. Not a huge hill, just a 3-4km slow rise, but heck it felt like it was downhill all the way. Wearing my five fingers I glided up to the lighthouse on the cape. 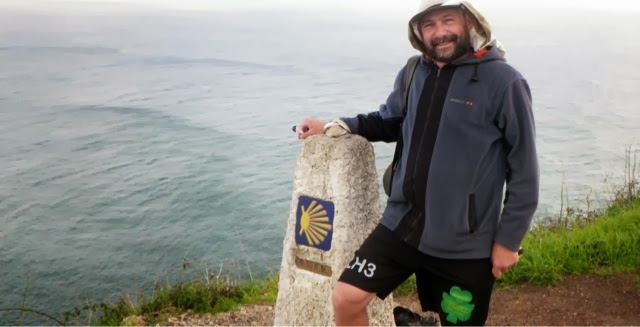 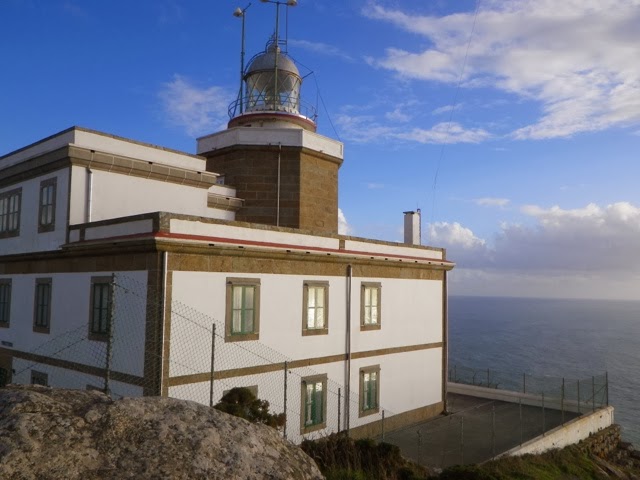 Just past the light house is where people had attempted to burn cloths, and other just left belongings. There were quite a few people here, many were tourists I am sure. I should've left my watch - it keeps stopping.

I walked around and contemplated, shed a tear, gazed across the Atlantic with glassy eyes as the sun starting setting. When the temperature dropped a little I withdrew to the licensed facility on top for a scotch. They poured me half a bottle of 12 year old Chivas as per usual, for €3.50 and I checked in on Facebook....  A monumental check-in!!

Eventually the other punters caught up; here is Claire our resident drug and alcohol counselor from Melbourne with Oonagh and Niall. We drank wine and were soon joined by others. Even Deede texted me to say she had arrived and would be making her way up for sunset. So I checked for her a few times, one of the times I found Birgitta from Sweden wondering around. Eventually Deede showed up with a friend. Deede also walked it, in three days. Pretty amazing. Big day for her today. With the cape walk it would've been 40kms she covered before finding her fartsack. 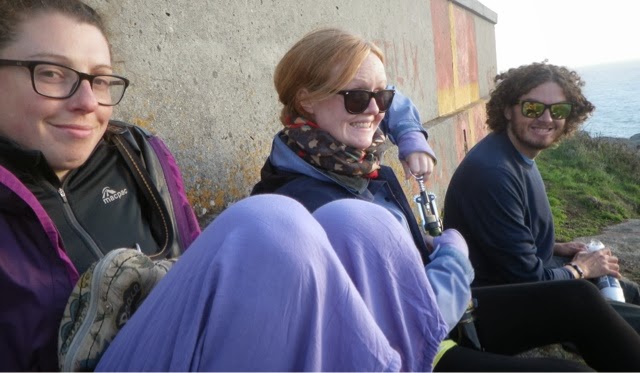 We ended up having some Irish coffees and beers in the cafe before calling a cab after dark. No cabs. So we all walked back to Finisterre, downhill... Burgers and beer marked the end of this mega day, the end of my Camino, the start of a new life!

Oh did I mention the proposal we witnessed on the edge of this earth? This couple were surprised by these musos who gave the woman some beautiful flowers and then did their thang. The man went down on his knees,... And they will obviously live happily ever after.

It was past midnight by the time I got to bed. Mission complete. Bus to Santiago tomorrow, then train to Madrid the next day and off to Dubai that same night. And life goes on PC - Life Post Camino.

Brilliant achievement Walter , so proud to have shared beers with you all those years ago.