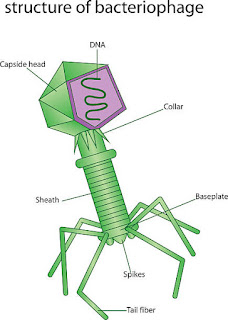 We are anxiously awaiting word from the FDA to approve my bacteriophage treatment at Yale.

Because phage therapy is still not officially cleared as an official treatment on humans in the western world, use of them must be applied for before researchers or doctors can use them on a patient, and that includes research.

Just to recap. Phages are the millions of natural enemies of bacteria. They are viruses that cull bacteria populations. If it wasn't for bacteriophages our sewers and compost bins would be overflowing with green ooze :)  Like any overpopulation, disease/viruses ensure population numbers are kept in check.

Bacteriophages are highly specific (hence minimal side-effects), and one phage cocktail that may kill the pseudomonas infection in my lung, but not the pseudomonas infection in someone else's lung which may require another combination of phages because the bacteria came from another source, and is, therefore, a different genotype.  Because phages are all unique they cannot easily be classified as a medicine because they really are a family of bacterial agents. For every patient, a unique phage cocktail has to be prepared from a Phage Bank. Exceptions are of course if it is the same bacteria that has infected many, say with a hospital infection.

With phages not exactly qualifying as medicine and one phage cocktail not curing all infections as similar as they may seem, it is very difficult to conduct clinical trials where historically one medicine is tested on a number of patients. Even if you had a collection of 30 people with Cystic Fibrosis and with Pseudomonas lung infections, each infection is likely a different genotype and requires a  different phage cocktail to treat. Biochemists test each person's bacteria with a range of phages and narrow down phages that are effective specific to each case. As bacteria mutate and gain resistance, the phage cocktail needs adjusting periodically. It is not one pill for all solution. It is a tailored treatment. Companies like AmpliPhi in the USA and others are working on creating more universally applicable cocktails which may get annual 'updates' just like annual flu shots do. Other researchers are trying to engineer artificial phages to gain optimal results for more infections.

Just a reminder, bacteriophages are not a recent invention,...Cocktails of phages were used therapeutically in Europe and the United States during the early 1900s pre-antibiotic era, used in the fight against the bubonic plague in Southeast Asia, dysentery in France, and cholera in India. Phage use is still prevalent in Russia and Central and Eastern Europe today. In the West, phage therapy was abandoned after broad-spectrum antibiotics came on the scene.

Lets hope I get the call soon so that I will still be healthy enough to fly the 15000 kilometres to the USA! I would hate to have another 2 week hospitalisation to get pumped full of antibiotics which hardly addresses my Pseudomonas aeruginosa infection and which are starting to give me nasty side-effects!

As soon as I get the call with a date I will contact the press and we will need to scramble for the $$$ to make up the target figure required for the documentary!

If you hear of anyone who has antibiotic-resistant infections, Cystic Fibrosis or anyone who may be interested please pass this website to them!

Thanks for your patience and support!