The whole night I've been up listening to the rain. Lying in the top bunk in an empty dorm again, climbing down for about 4 loo stops during the night wondering why I picked the top one again. Wondering about all the people in my team, my new Camino family, how out of the gazillion people I still remember 193 names clearly (remembering names is one of my primary weaknesses!). I question why people communicate, why they don't, ponder on personalities, why people need space, or why some people just need people. But in any case rain or no rain, today I'm walking in! I told a few people I'd be arriving about 4pm, maybe I was thinking the dutch brass band could get time to get organised (I kid you not this happened purely by accident in Turkey after cycling Paris to Istanbul; go read the book www.coughingthedistance.com!
Although the Alberge was relatively big, say 100 beds or so, I heard very little from my mini private dorm and assumed no one wanted to walk to Santiago in the rain. It was 7pm when the lights came on automatically (!). I packed up and was out in the drizzle at 830pm.

On leaving town there was a nice long downhill forest path, which made for  peasant dawn walking. A few kilometres later I noticed very black clouds quickly approaching. It was clear a Nescafé sponsored stop was imminent, this was confirmed by a small and cozy cafe appearing in my sight.  I ducked in quickly and the skies opened as the door clicked behind me. Half the café's clientele consisted of close Camino Family. Cole and Ash were there. I immediately rushed up to Ash to apologise about a marginal comment I had made about being gay. Nothing offensive was meant by it, but I later realised it just wasn't  nice and it may have offended them. They laughed and said not to worry, they hadn't been offended, hadn't even registered on the scale and if that was the kind of thing they'd be offended by they would be very angry people indeed. I am so sensitive myself now at this stage of the Camino that I try to be super careful myself. I know my brother always tells me I often accidentally offend people without even realising it.
Lizzy, Joke and Yvonne had breakfast with me under the coffee cloud and I left a bit before them as surely they'd catch me going up the next hill. Which surely they did, an hour later close to the top of the first hill of two on the way into Santiago.
Today's walk was only 18kms and in my head I was calculating my ETA. I stopped with the girls at another cafe almost on noon, and had a beer to celebrate the day. 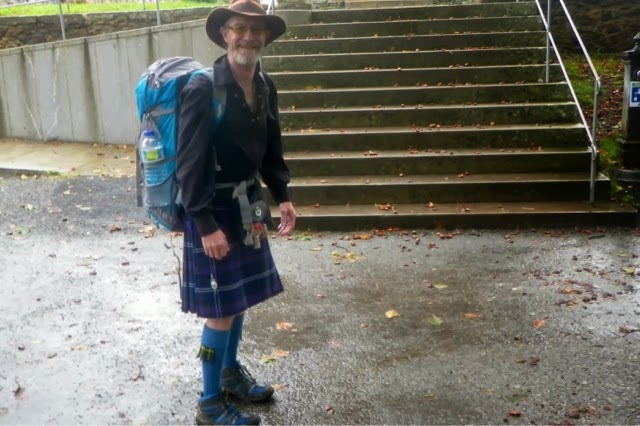 Then I ran into Stuart the Scotsman (see pic above). He struck me as Scottish right from first sight. Not sure what it was. In any case he is a very nice man, had done various Camino routes and had volunteered for the organisation as well. He was just completing the Camino Primitivo, a  not so  common route to Santiago any more. We shared a beer and a hamburger in the next pub, which was another hours walk uphill away. Nice of Stuart to keep me company going up the hill.
Only about 7kms out of the city, and after discretely passing the airport (unlike near Burgos where it was a rough trot into town alongside the airport), I found Lizzy and co again, sitting down for coffee. Actually they'd passed me a kilometre before. They had a beer in another pub. Dutch courage sure is popular!! My walk at this stage was interrupted by a phone call from a Spanish man about something that he was excited about. I spend a few minutes trying to figure out what he had wanted. He had someone who spoke English call me a bit later to explain my bag with cards/meds had been delivered to them, in a pub near the intended Alberge. I wrote down the name of the pub... in my head... With a mental picture of where she described it to be. Foolproof.

Anyways the girls were having coffee near this big peregrine monument on the hill. I took the obligatory photo, and a bonus photo of them, see below, and decided to make tracks to ensure I wouldn't be late for my 4pm appointment at the Santiago de Compostela Cathedral. 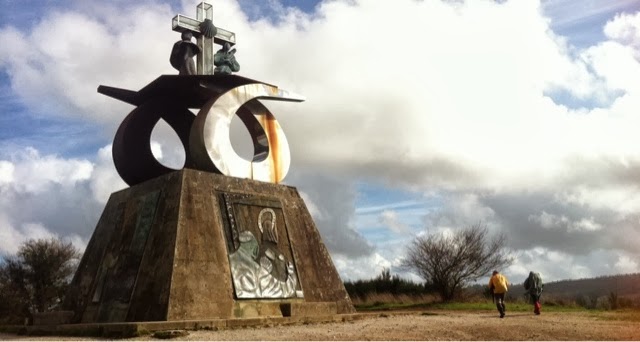 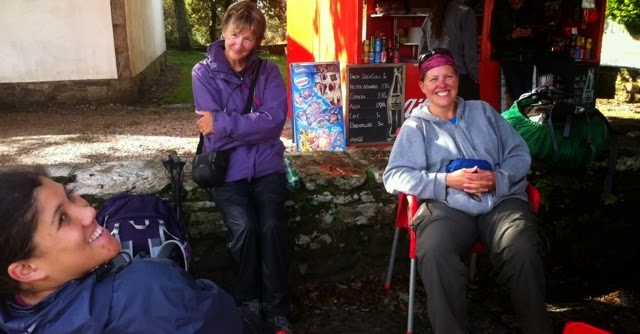 The girls were relaxed and in no rush to arrive. I was nervous and close to tears as I walked into Santiago. I'd read how horrible the walk in was, and many people even caught a bus in. But again, like the Meseta, it was booooooogus. Nothing wrong with it. Maybe books are dated, but they all speak of major highways and walking along emergency stopping lanes, crossing dangerously repeatedly... I recall one dangerous crossing the previous day which was on a crest of a hill on a kind of busy road though not a highway in my opinion. Maybe that is where the German men came to grief last month. Anyways, it was a pleasant walk until... 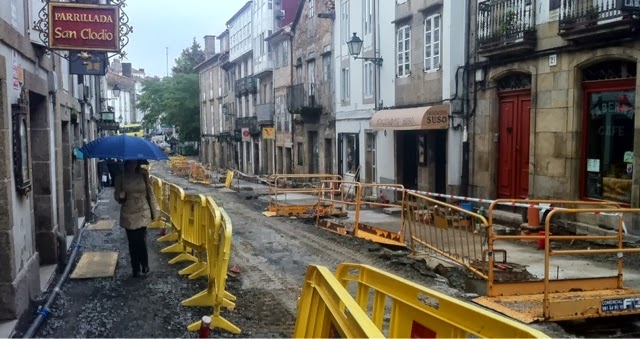 Roadworks. But again this was not a worry. There were no more hills, I was making good time and ahead of schedule. A kilometre out of the old town I sat down in a cafe and ordered a scotch. They sure know how (not) to serve them here. Obviously no one has ever shown them the curriculum for The Responsible Serving of Alcohol as taught in Australia to anyone who is to serve alcohol in any licensed establishment. 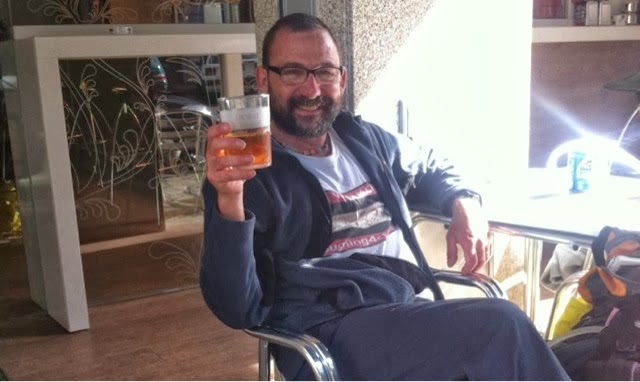 The girls caught up just as I'd changed into my Vibram five fingers for my 4pm arrival. I hadn't worn these shoes for a little while as they're not so ideal in rain. It looked like it would be sunny for the next 15 minutes. So Yvonne, Lizzy and Joke order wine and nibbles as it looked like rain to them. I left 3 minutes later in the rain...
And fifteen minutes later i walked through the spectacular medieval feeling arches and roadways into a magnificent square. People with umbrellas were ducking around in puddles as I walked across the square, looked for CNN and ABC news crews, turned around and caught a faceful of cathedral staring down at me. Breathtaking. Thanks to the rain and my camera not wanting to turn on there is no photo of that. Funny how my camera failed to turn on for these monumental moments like the Cruz de Ferro and the arrival in Santiago. Taking photos with a phone is also cumbersome in the rain as touch screens don't respond well with rain...
It wasn't terribly busy on the square and I asked some people where to go. They weren't sure either, so I plugged the destination in my iPhone and alerted Karina that I was heading for the peregrine office.
There I showed them my collected stamps and was duly handed over a certificate with my first name terribly misspelled. Turned out they create the pig-latin equivalent for you. Anyways, Karina and husband Mark appeared and hugged me and congratulated me and I shed the compulsory tears. The scotch had helped me control my emotions,  it is not often alcohol's associated with a success story.
Within minutes I was whisked away into a gorgeous hotel right there opposite the office and shown my rooftop room. There I got the message from Carlene to say she'd waited for me and asking where I was. I was tickled pink she had come to see me arrive and said I'd be down in a flash, but she had to go take care (read 'bathe and whiskey') of Kath who had also arrived. Six o'clock apparently we'd all be meeting for dinner. So I went downstairs and ate and drank with other camino family arrivals, like the girls who arrived in a rainstorm...
When six o'clock came I was done for the evening really, but Rebecca, Jo and Lynda showed up, as well as Dan and Kelly, and before we knew it we were seated in a tapas bar with a terribly unfriendly waiter. Everybody was there, Father Jim, Kath and Carlene, Sineade showed up as well as Wendy and Deede with San Franciscan Sharlene. It was hot and steamy in the back of the restaurant and I could hardly keep my eyes open. With my agua-con-gas (sparkling water). I went to the front section where Karina and Mark were, but come 8 o'clock I had to evacuate. It was very special to have us all together one last time, even though I must've appeared as enthusiastic as a wet sponge! Anyways, I was out like a light after doing nebs and slept like a baby who's just walked 800kms with a backpack.
And no, this story ain't over yet.

Huge congratulations Wally, what an epic journey, not only physically but mentally. You are a Hero, I'd like to know who many people with CF at your age & advanced stage have done the Camino ?? But you have & your family, loved ones, friends are all incredibly proud of you.

Yes! Indeed! We are all incredibly proud of Walter and grateful that he has arrived in Santiago. He just phoned me, on his way to Finisterre!
SURPRISE!Thanks Wally.Take care and good luck!