Today I left Casa Curra, my little friendly hotel, in the dark and in the rain around 8am. Just as I opened the hotel door I saw Wendy and Deede slip out of town across the road. I walked about a block before finding an open cafe, where Kathleen was chewing on some toast and swallowing it down with nice smelling coffee. Of course Piedro was swamped again by the peregrines and was busy making toast and serving the hordes, and I watched him doing so from across the bar for 15 minutes before managing to get my order in. My pet hate on the Camino is waiting to place your order while friends sit at a table about to go, but if you want coffee you just have to relax and wait.... No one dares order anything complicated as Piedro is frantic as it is. So the fare is coffee, orange juice (from amazing juicing machines) and toast with jam. 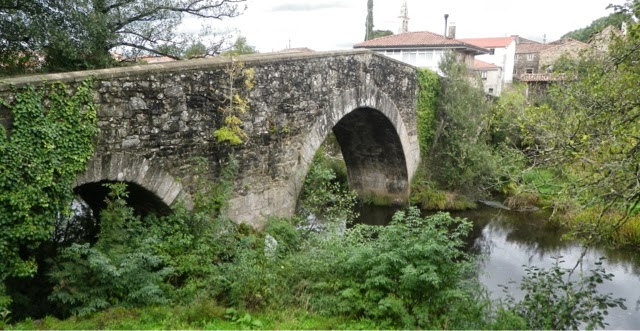 By the time I am served Kathleen is about to go. My mate Mark Cushway surprised me with a phone call, so I delayed my departure a little more, seeing me leave town at 930am.
An hour later I arrived at an Alberge where my bag had been sent to, and Kath and Sineade are just leaving there.  I get my insulin (!), a new ventolin puffer, some more saline and a stack of postcards. Inject insulin right there and then. A dozen other Camino Amigos walk in/out. The Tour-o-grines don't seem to be around. Maybe I left too late, or they don't do rain.
The procedure for moving my bag on is as complicated as it can possibly get. You write your name and phone number on the provided envelope, with the designated destination, put in some money and you call the number on the envelope to say there is a bag ready for pick up at this Alberge. Sounds easy enough, but this procedure can sometimes take up to an hour. If you do it early in the morning or late in the afternoon it is relatively simple, but if you call say after 10am they think it needs to be done today, even though the destination might be over 50kms away: Santiago de Compostella in this case!!
So because I struggle on the phone in sub-par Spanish  kind people immediately try to help, which means the phone gets passed between several people, none of whom I managed to explain the situation (that I don't need it there tonight). Then extracting an amount of euros to put in the envelope is the next trick. This is a complicated science. It appears they want €6 or €7 per 'day walking distance', and this is often unpredictable. Sometimes you must guess it and then they deliver it with an additional  envelope with an amount scribbled on it which may mean what it should've been, what is still owing or the change that is no longer in that envelope.
Now seriously it isn't that bad (and usually someone in the Alberge does it for me), and maybe it didn't take an hour (unless perhaps you include time it takes  getting the change from the barman to put in the envelope), but the frustration of this process is high as I want to walk, and not cause 5 people to all be involved in this simple task (we did this daily in the beginning, but then it was done in the late afternoon with everyone else). In this case the service even called me back to clarify details, which details they were after I could not understand, but the Italian and French friendly people handled that for me - who at this stage know what is meant to happen. I put €10 euro in as the consensus was that it was a single days walk to Santiago (in whose 7 leagues boots???). In my opinion all you need to tell them on the phone is that there is a bag waiting for them in a place, and they should ask you which town it goes to and then tell you how much. This should not be a difficult conversation.

So finally I get on the way again and manage to walk another hour before I get to a lunch spot. Lovely Nuria the Spanish guide who helped me before tells me the next town is much better for lunch. She buys me a beer, leaves with her client and blows me a kiss (!), which raised  eyebrows with Alex from Taiwan and caused him to giggle some more. Alex is very sore today with what appears to be a shin splint, and is moving along painfully slowly, still laughing and giggling as he tries hard to communicate with me in English. I spend half an hour trying to order some toast with cheese at this bar, so it was close to an hour by the time I hit the trail again. I figured I won't get to where I'm heading today so I might as well crawl up the next hill with Alex for half an hour. I could walk up it myself in 25 minutes, but the average punter does it in 10 minutes. 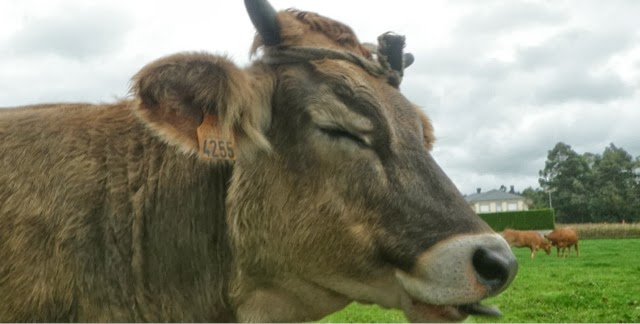 And so 5kms later I arrive in a large town with a choice of restaurants. I walk into the first one and find Nuria and client Pepe, a Spanish cancer survivor in his 70s who sometimes walks over 40kms in a day.  With them I see Dan and Lucia from Madrid. Lucia is Chinese and Dan is South American originally. No idea what they are doing in Madrid but Dan speaks excellent English as he studied in Oxford... This restaurant happened to be an octopus restaurant, which is what they were eating. Finding octopus too eeky i just ordered Chiroso and greasy eggs with fries, swallowed down with a couple of beers. Pepe was telling us all about how nutritious beer is and explains how the lifestyle that goes with beer drinkers is the only thing unhealthy about it. I am learning Da Spanish! Nuria is drinking Albariño, a Galician grape variety white wine. Although it tasted very nice and would compliment my sausage I decided for beer as my gout is just about gone again. 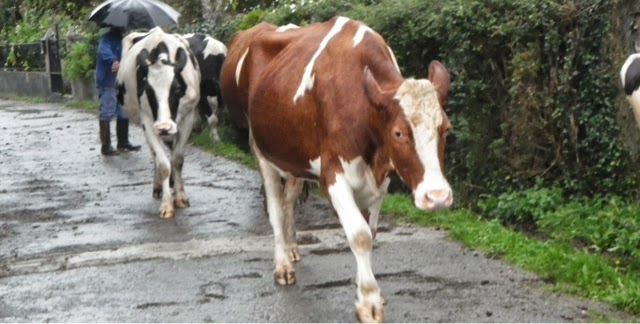 By now it is raining outside, it is 3pm. About 5pm I come to a nice town called Boente and walk in an Alberge cafe to seek shelter and drink hot chocolate. I know 3/4 of the people there but by the time I decide to stay it was booked full. Almost another hour has passed before i leave in the rain to Castaneda where I had intended to go to. Wendy had figured it would be three 22kms days to get to Santiago if we choose this town, and I had booked a bed. Wendy and Deede got a double room.
When I arrived there I discovered I was the only peregrine in the Albergue except for Wendy and Deede who had the only private room. So here I am writing this all down in my own private Idaho again, whilst my washing is drying in the drier. Amazing.
Charlene the accountant from San Francisco is in the hotel across the road, she had dinner in our Alberge and told me she walked here with Kathleen and that Kathleen had continued on.  And so our trio is split up for the night. Kathleen ended up 3kms past me in Ribadiso (which looks like it is off the Camino according to my map), and Sineade is in Arzua, about 7kms further along. Sineade must've walked in pouring rain with her sandals. She is determined not to buy shoes for just a few days of walking. I feel her pain.
But what concerns me most is that despite my dawdling my right shin is starting to hurt. Could this be a shin splint this far into the walk? I figured these 20km days were a piece of cake. The over 25s were always a stretch, with the 30km distances really pushing it. But 22kms without significant hills (mind you there are still plenty of good climbs) is really not that hard.