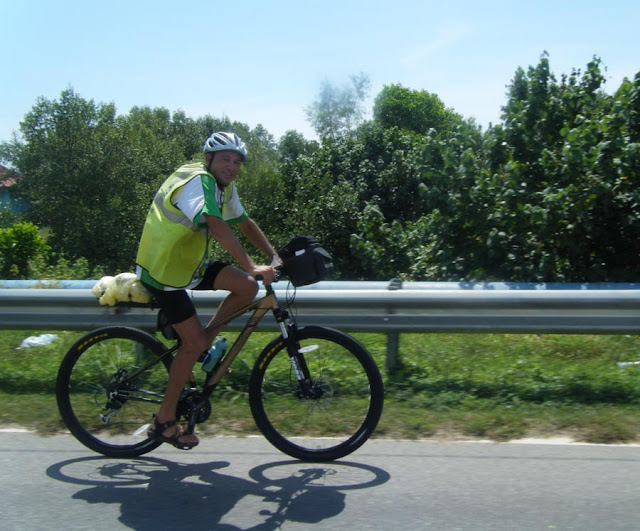 
Now pay attention. The hotel Seri Malaysia Rompin is not in Rompin. The Rangkaian Hotel Seri Malaysia however, despite its title not containing the word Rompin, IS in Rompin (at least Google maps thinks so) so we can, with hindsight, begin to understand the dilemma of this morning's taxi driver, who, having been despatched to the Hotel Seri Malaysia in Rompin, was bemused to find himself having to drive 22km further than he had bargained, and we had paid, for.

We first learned of his travails when he flagged us down on his way back up north to Pekan, as we were riding south. We spent the first few minutes of the conversation thinking he was a dangerous lunatic, but as the strange distribution of Hotels Seri Malaysia became clearer, and a call was made to the one called Rompin (which was, you will recall, not in Rompin) we agreed that he deserved an extra 40 ringgit for the extra kms, managed to scrape enough notes together between us (the ATMs in Pekan had not liked the look of us at all that morning), bade him goodbye, and set to wondering whether we could possibly ride the extra distance, on top of the 90km planned, or whether we would have to find the Rangkaian Hotel Seri Malaysia, or similar, and have the bags taxied back to us there.

Well, we needn't have worried. Thanks to Walter and the Girls of Steel, who took turns to ride Sir Walter's new Raleigh at speeds at least the equal of the mighty Zocos (unburdened by panniers and batteries, it must be said), we reached Rompin with time to spare for the extra leg to the ill-named establishment. We looked around in Rompin for the other Seri but it seemed not to exist, and was probably an incarnation of the more southerly Seri, relocated and partially renamed by Google. Reassured about the distance by a friendly Indian called Steve, who arranged our drink orders in the Osama bin Laden-themed cafe despite not working there, we completed 115km for the day to the correct Seri, to be flawlessly reunited with the bags.

It rained pretty hard in the morning, so at least Mirjam has got the first wet-socks experience over with. Our next challenge (we like to have at least one a day) is to find somewhere to stay halfway to Desaru. According to every map we can conjure up the relevant section of road contains...Absolutely Nothing.

well there were lots of pictures of OBL on the walls, for some reason