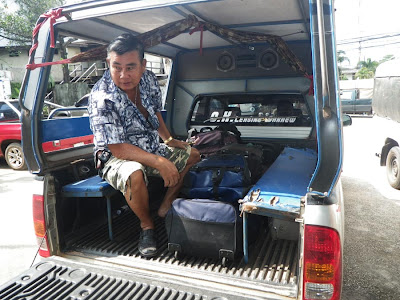 This morning at breakfast Al heard from the TCC man and it transpires that Jeab is a man. The woman whose name is partly Jeab and whose business card is about bicycles was an entirely coincidental drive-by philanthropist. It's all very strange.

We had our first full day dose of Thai roads today and they are of an entirely different order than what we have become used to. Nice and smooth and with a fairly wide shoulder outside the white line for us to lurk on, but the traffic is like grown-up western traffic. Cars and trucks and buses thundering past us all day at 120. Tiring and stressful. The roadside coffee shacks have given way to rather posh cafes doing iced lattes and cakes, though for some reason we passed the Cowboy Love cafe and went into Coffee Please.

We made it to the Grand Plaza hotel in the dark, again, recoiled in horror from the loud karaoke in the restaurant, went out to look for something else but the stalls were shutting and nothing appealed so had to grin and bear it. Wouldn't have minded if the food was good. At least our bags had arrived safely.

Thank you again for your dedication to the blog. It's remarkable where you all find the energy to meet these endless new challenges! Wishing Walter and the team good riding, good eating, and better karaoke (it's never good.
Cheers xx

Perhaps if you were to join in with the karaoke?

Your blog is becoming addictive. I really missed it when it skipped a day or two. Glad to hear that you are now definitely on the the left side of the road even if it is with 120 kph traffic. Keep it up team Australia is with you! JR