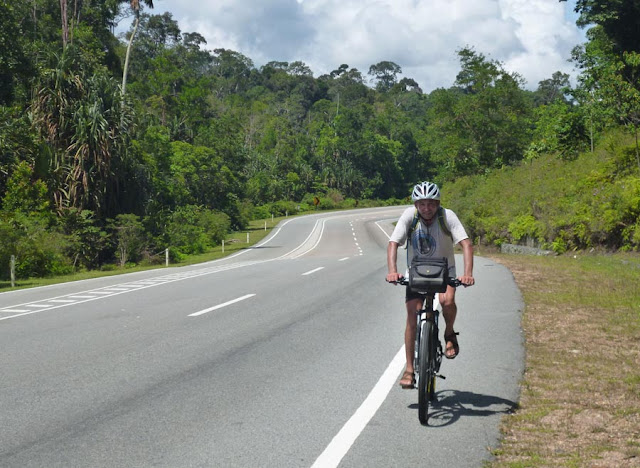 Wal in the Malaysian jungle


Breakfast was OK. And so was the ride for the first part. Wal managed to find an elusive Felda residence just where we wanted it to be halfway between the Seri Malaysia and Desaru. Taxi came and went. Everyone was agreed on the destination of the bags; just a couple of km off the highway, 80 odd km away. Almost too good to be true, you would be forgiven for thinking….

The first thing was the hills. Not a problem in themselves, in fact they made for pleasant riding, especially through the forest of the Gunung Arun national park, but they slowed the mountain bike down a fair bit - Wal was on it in the morning - so the team became a bit fragmented and spread out.

Then quite a few things happened. Al had a chat with a friendly Malaysian Indian called Ayyou and exchanged cards and phone numbers. Our thanks to Ayyou for his contribution to CF! Karina got a puncture, while at the back of the drawn-out peloton. She started walking, and at some point exchanged words in Malay with a truckie. Al started to wonder why Karina was so slow and waited at the brow of a hill. A truckie stopped just past Al and started waving his hands, saying 'bisical' and 'problem' and pointing back up the road. On the way back, Al got a call from Ayyou, who then handed his phone to Karina. When Al got back about 4km to Karina, who had been wheeling her punctured bike for half an hour, there was Ayyou, who had kindly gone to check on her, of his own volition.

No worries, we thought. Between us we have tyre levers, a puncture kit and a pump. Um, all except a pump. Ayyou to the rescue again! We rang Wal, found the rest were in a cafe way in front, and the redoubtable Ayyou rode his moped up to the cafe, got the pump and came back so we could fix the tyre, which we did using the special peel and stick instant tyre patches sold to Al by the bike shop in Busselton. About 2km further on, we mended the tyre again the old-fashioned way using Karina's kit, and this time it worked. The rest had now reached Mersing where the first thing the GA showed them was a bike shop, so the tube was replaced to be on the safe side, and Wal even got some mud guards fitted on the Raleigh.

The rain set in after our afternoon refreshment stop - at a Chinese place with beer! You have to love the Chinese - so the mudguards were put to good use. We pressed on throughout the rain, naively thinking we were done with punctures for the day.

This time Wal and Mirjam - she on the Raleigh by now - were at the back. Waiting for them, Al was alarmed to see W riding down the hill in the rain and gathering dusk, towing the empty Raleigh. Was the Van Praag family bond really so weak that he had mislaid his cousin, so early in her team membership?

Fixing this puncture also took 2 goes as the rain kept wetting the rubber solution, but we were, eventually, back on the road with only a few km to go to our cosy overnight accommodation.

We thought we'd just confirm with the cops in the little police hut at the corner that we were nearly there. It was dark by now and still raining.

Not for the first time, we had a reservation in a non-existent hotel, or rather house, or rather a house that did exist, but did so in a place not commensurate with the place in which we had been told it existed, if you see what I mean.

Wal called the house and a plan formed - the fellow there would come and get us in his car; we would leave the bikes at the police hut, as we had to back-track to there tomorrow anyway. We piled into the car when it came - Sir Walter travelling in style in the boot with a large cardboard box on his lap - and were taken first for a damn fine dinner of rice, noodles and roti cani, and then to the house, which has quite a few rooms, about twelve mattresses but only two blankets, and no towels at all. A large lizard just attacked Mirjam in the toilet, which is a squattie. The team has distributed itself around the accommodation - Wal one room, girls' dorm the other, Mark on the landing and Al in the kitchen.

It has been an interesting day.