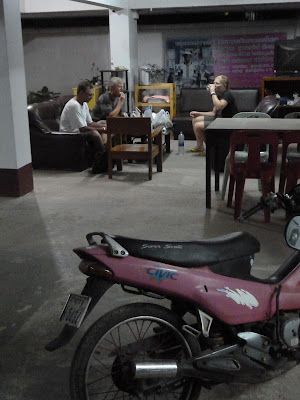 Apologies for being off radar. A couple of late arrivals, lack of usable wifi (Thailand so much worse than Vietnam and even Cambodia in this respect), blog monitor having other work to do and sheer slackness are the only excuses I can muster.

The last couple of days have seen Wally gradually winning the war with the gps - it trying to drag us back to the highway, Wal persuading it to join us on little winding village roads through groves of coconut trees. Last night's stop sounded promising - the  Mukda Resort near Chumphon turned out to be less of a resort and more of a motel. In fact it was not in the least a resort and entirely a motel, but a comfy enough one for all that. It was bang on the busy highway, and lacked a restaurant, so going out for dinner involved being escorted along the hard shoulder of the tumultuous road for several hundred metres in the dark by the little Thai lady proprietor, past a couple of food stalls that she didn't approve of ("NO, NO!" - about a quarter of her English vocabulary), to a row of stalls with quite a few young diners and their cars - one with both doors open and music thumping out.  We had fun discussing the menu with the waitress, each in our own language, until a lot of pointing and kitchen visiting produced, in an instalment-plan kind of way, an agreeable repast, and one almost, but not entirely, free of karaoke. Sadly a large machine, half TV half jukebox, was put through its paces by some of the young blokes.

The day before the ATMs had been grumpy and refused us money. Walter reassured us he had plenty so we didn't waste too long on it. It transpired that his well-known sunny optimism extended to the contents of his wallet and we didn't have enough between us to pay the motel and a taxi for the bags. Mark came to the rescue by riding off in the early morning to the next town to find a more friendly machine. It gave him a chance to ride at a speed and in an air temperature much more to his liking than the rigours he goes through hanging out with the team….

A good day's ride brought us to the dusty but rather nice little town of Chaiya, which had the most fabulous night time market where we fed ourselves dinner walking from stall to stall trying things out,  including some yummy big nuts nobody had seen before - shiny brown, thin shells, about 40mm long, flesh yellowish white and soft, for a nut, tasting a bit almondy. Two different English-speakers, in different towns, said exactly the same - they only come from the south of Thailand, they don't know what they are called and they don't know what sort of tree they grow on. I've had no luck googling them - does anybody know?

Mr Google has me thinking that the nut in question is a Thai chestnut, Sterculia monosperma, maybe check out the picture and see if that is it.