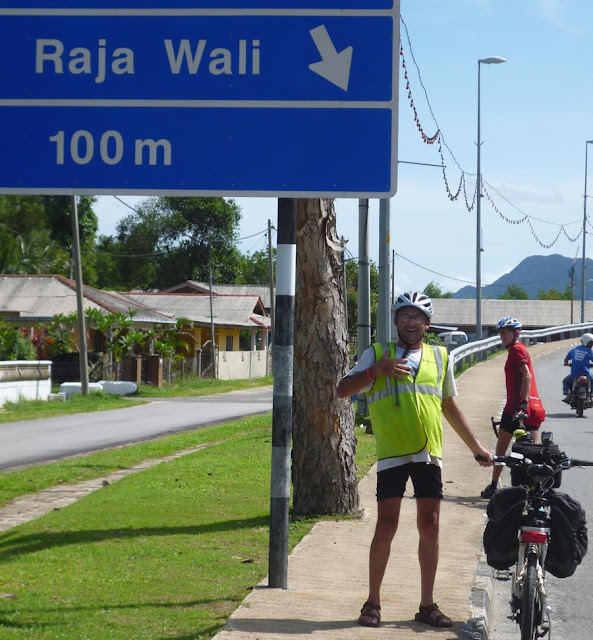 We had considered staying 2 nights at the Mayangsari, but the breakfast convinced us otherwise. It is much less easy to wriggle our way down side roads than it was in Thailand so the day was pretty much on highways, though not horribly busy ones. We are a bit underwhelmed by Malaysian hard shoulders, too - patched and potholed and often dwindling to nothing.

The monsoon took a day off today and we rode in the sun - thank goodness for our self-generated 23kmph cooling breeze. We will draw a veil over our brief foray into McDonalds. Even people who are enjoyably immersed in foreign cultures need a coke occasionally.

We covered 90km in good time and got to the allegedly 4 star Legend resort at Cherating only to find that Walt had done the booking on agoda just after midnight so inadvertently booked for tomorrow and the next night instead of tonight and tomorrow. Not hard to change you would think - say nothing to agoda, they get paid for 2 nights, we stay for 2. Who cares which nights we are actually there? They insisted we pay for the first night and go back to agoda to cancel at great expense, agoda nothing to do with them, blah, blah. Agoda website said 100 dollars to change - but Wal rang them in the US, they rang the hotel, all sorted in 2 minutes, no charge. A million points to agoda, nil to Legend resort.

But they have beer! Very expensive beer, but beer nonetheless. We sat down in the restaurant, which was quite small and ominously empty for a place with hundreds of rooms, and surveyed the menu without optimism. A very small list of the usual suspects - fried rice, fried noodles - for 4 times the price  of a roadside cafe. We thought we were trapped in the middle of nowhere with no alternatives, but Wal made enquiries and we were cheerfully assured that 5 mins walk away there were other restaurants. Quite true - we had not been paying attention on the way in. So had Chinese food - and beer! - at only twice the roadside cafe price, and very good it was.

An odd thing, though. There is invariably a dessert involving bananas on the menu, when there is a menu - fried bananas, banana split, whatever, and we have often tried to order one, and they never have any bananas. On this occasion we could see a stall over the road with about 50 000 bananas on sale, but the restaurant had none. Just one more thing I don't understand about the world.