To the Holiday Hotel 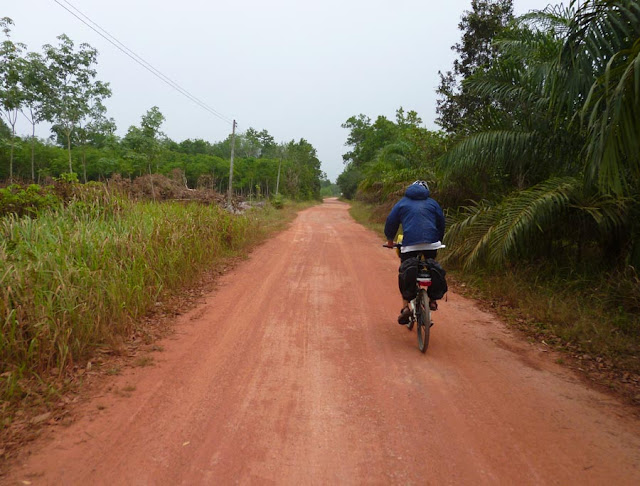 Yup, this definitely isn't the highway.

Today there were alternative roads we could take, so we took 'em. GA must've whispered something in Wal's ear as he called an early coffee break and sure enough it rained while we were under cover. We did 113km which was no great stretch but we all felt tired at the end. High humidity may have been a factor, although it wasn't that hot and it rained on us a bit.

The Holiday hotel in Phattalung is very modest but nice. Our fridge is a rather fetching shade of deep turquoise. We wandered out to look for dinner and ended up in the BEST restaurant. That's not a review, that was its name. They had a 'menu for farang' (foreigner). Just the one - we had to read it in turns, but were distracted by trying to decide whether the waitress was a drag queen (verdict - probably not, despite looking a lot like one). Dinner was good, if not actually the BEST. Made a run for it when the rock band started - the Thais really like playing loud music to each other. And, unfortunately, to us.

We stopped and admired two lambrettas and a vespa restored by a young Thai bloke on the way back. He was sweet and we all agreed how nice Thai people are in general. Then we stopped and bought water from a real sourfaced grouchbag of a woman. Ho hum.