The team crosses the border. Some members more often than others 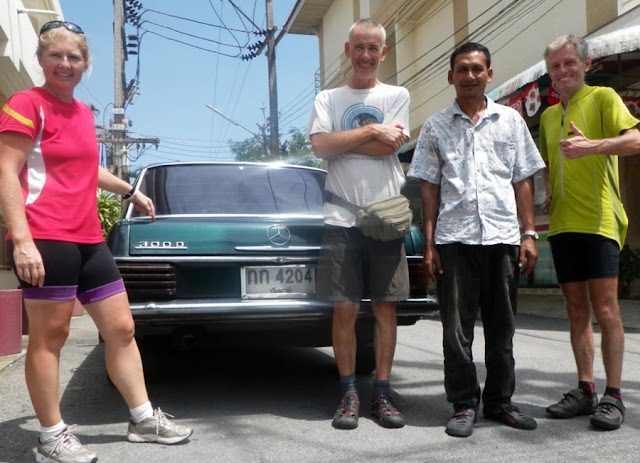 It all seemed to be going so well. The girl at the hotel in Narathiwat called a taxi driver who turned up in a rather battered but splendid old Mercedes, was told we were going to the border, asked for a rather modest 250baht, which Wally doubled if he would go over the border and drop our much-travelled bags at the selected hotel and conference centre (of which more anon) and much nodding and smiling and OKing ensued. Off the bags went, and off we went to start our gentle 68km jaunt for the day. We had already procured breakfast from the good ol' 7-11 round the corner, so needed only to stop for morning snack and lunch before arriving at the Sunghai Kolok border crossing, where nobody seemed keen to process us before we had freewheeled all the way to the Malaysian immigration side. Maybe the Thais didn't care about our overstay and just wanted to be rid of us. Too good to be true? Of course! They sent us back to the Thai side where all our charm, cajoling and mentions of charity, sickness and heroic efforts to traverse the entire country in only 15 days failed completely to get us out of having to pay a fine for overstaying our visas for two days. At least the 1000b each for the 3 of us was less than we would have paid to extend the visas via the proper channels (Karina, who had arrived at the airport and received 30 days entry, stood by smugly and complained about the lack of chairs for non-criminals to sit and wait). Much worse was the amount of time the officious official took to fill in 200 forms in triplicate, longhand, before he would let us through.

But eventually, through we were. There was, at first, no sign of the massive and well-appointed Nur Inn hotel and conference centre. Only one small and tatty-looking hotel called the.....uh oh.

Despite its smallness and tattiness the Nur Inn was friendly and welcoming. Its main drawback was that it did not contain our bags. The owners had been sending us texts and emails, but we have had no phone coverage for the last 2 days; it seems our friendly Mercedes man had called them from somewhere in Malaysia and was demanding more money even to come to the Thai side of the border and hand them over.

This had been our fear ever since we lost the services of Nam and Mom and had been handing the bags over to an unproven taxi man each day. Would they ever be seen again? We were unable to work out exactly where the bloke had gone, and why, but he had offered to come to the border at least so the hotel owner drove Al back to the border - lucky it was only 2 minutes away and we had decided not to go another 40km into Kota Bharu, thank you GA - back out of Malaysia and into Thailand where we waited in the car park. Within 5 minutes the Mercedes appeared containing driver, wife and kid, and the bags. Al had our last few baht - half the 200 asked for - and was not inclined to part with anything more, but it soon became clear that the whole thing was a misunderstanding. There was another border crossing, which our maps had not shown us, much nearer to Narathiwat, and it was there that the hotel girl had told him to go. All the nodding and smiling and agreeing to go into Malaysia had been just that - nodding and smiling, with no underlying understanding of what was being talked about. AUD were handed over to more than the difference, and Al and driver entered Malaysia once more - this time avoiding a fine, having been in Thailand for about 20 minutes.

Ah love it, keep it up Team, in holiday mode now. See you all in 13 sleeps. Best give me a list of must have foods, apart from cheese, olives. :)