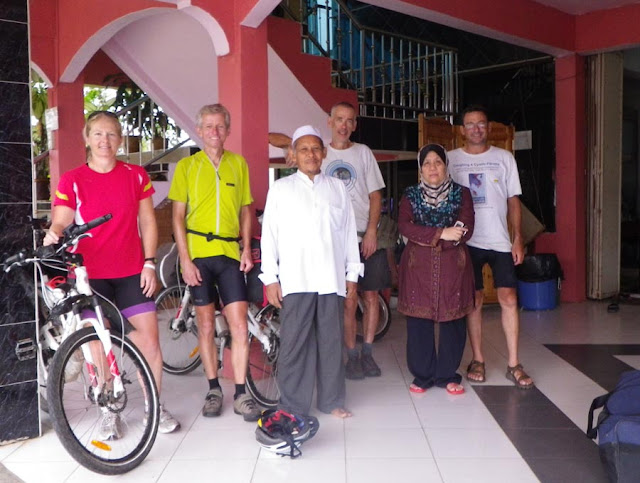 The proprietors of Nur Inn. Unusually, this photo was their idea.

Can't give enough praise to the family owners of the Nur Inn. Refused any payment for taking Al back over the border, drove our bags to Kota Bahru in their car for fair price, sent Wal a message to say the bags were there and when he thanked them wrote back again to say how much they enjoyed having us. Such nice people.

39.6km today. It was tough, but we made it. Stopping for breakfast after 500 metres helped. It was raining at the outset but  gradually cleared, then came on quite heavy again just after we arrived at the Tune hotel in KB. It's getting quite uncanny.

The Tune hotels are owned by Air Asia and it really shows. Room rate reasonable - then add aircon, hairdryer, TV, wifi ….. towel! (we settled for just the towel) Room tiny - Wal has the window seat, Al the aisle. But in the end, it's comfy, and still cheap. Al, Mark and Karina had a wander around town - not a great deal to see, really, as the day market was shutting up and the night one yet to open, but we whiled away the time  - snacking, mostly -  until the food stalls opened up and had a fine eclectic dinner. Watching rats running around made a pleasant change from karaoke.

The hotel claims to b in Central KotaBahru but is barely on the little tourist maps! Not could they find a fridge for my medicine - my Pulmozyme never wouldve survived this night :(