From the Legend to the Zenith 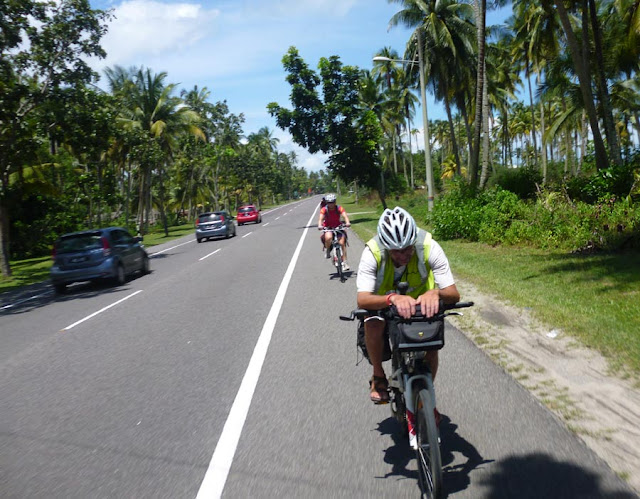 
The sun streamed in through the window of the Legend resort this morning and continued to stream all day. We made good our escape from the L, and at the second attempt found a beautifully attired Mr Syed the taxi man, in full robe and cap, to take the bags to Kuantan. Today is Hari Raya Haji, so perhaps that was why he looked so fine.

The holiday meant that our prospects for morning coffee were not at all good. Everywhere was shut. But eventually we spied a Chinese place, which turned out not to have any coffee, but no matter; other drinks were ordered and even a bit of chicken curry to keep us going for the strenuous 40km slog.

We cruised into Kuantan down a satisfyingly steep hill, had a quick snoop in a bike shop in passing (tomorrow begins the serious bicycle shopping so that cousin Mirjam can take over one of the Zocos while Wal and Al take turns to be proper cyclists without batteries. Jim - think of us!) and got settled in to the Zenith hotel. After which it was time to hit the huge Mall over the road, though most of the time was spent trying to get Maxis the phone company to sort out why a) Wal's 10R credit was used up by a single brief phone call, not to mention about 80 pretty damn quick before that, and b) why Al's data has not worked since the first day in Malaysia. The first was blamed on the iPhone hoovering up data even though the data limit had been passed, and never mind a Sorry, sir, here's 10R free credit for your trouble - more like that'll be 30 for a new card plus 1 for paying by credit card. Al's sim was tried in 2 different phones without success before they agreed it was defective and replaced it. Whole thing took ages - Wal and Mark both got their hair cut while it was going on. Remains to be seen how the phones go tomorrow.

Didn't fancy Mall food so went to look for Chinatown which, oddly, seemed to be shut for the Muslim holiday too. Eventually found a solitary open restaurant which turned out to be vegetarian - yay Mark! - and very good.

Resting tomorrow (and bike shopping and exploring Kuantan) so the plan is not to get up early......