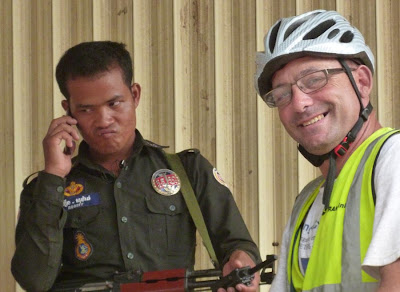 
We said a fond farewell to Cindy at breakfast this morning and set out to ride 112km to Sisophon. A small plane flew over our heads at 10 something - I wonder if that was her?

The team was flying along since resetting the gear ratio on Al's bike - he was getting left behind before while Walter was just coasting. Now Walt has to work harder and about time too. Weather was perfect - cool and cloudy - and it even chose to rain while were sort of under cover having our drink and sweetcorn break. Cambodia came up with something you could call a hill today! All of 25 metres above the plain that has been going on for hundreds of kms. Walt simply flew down the other side to register a higher maximum speed - he hit 38.

We toured Sisophon for a while as we didn't have an accurate fix on the hotel for the gps, and we pronounced its name so badly that people were directing us all over the place, if they didn't just shrug. That's when we met the character with the gun, who spoke some English and made a call, then commandeered a bloke on a moped (handy things, guns) and made him lead us to it. Meanwhile Lucky, who was at the hotel already, had the presence of mind to jump on the spare bike and ride out to meet us. Which he did, at a junction where the bloke on the moped was resolutely taking us the wrong way.

Tomorrow Thailand. Lucky will come with us over the border and help us take the stuff, via a rendezvous with Karina, to Ka Saeo. Though we also hope to have a fellow from the Thai Cycling Club meet us at the border -- we shall see....

Well written Al, I muttered "oh no" when I saw Wally with Mr Big Gun & I'm not talking about his biceps!
You gotta laugh, goodluck with the passport into Thailand Wally, "ug", wish you wouldn't do these things to us, lol. Last heard of Cindy at KL airport & will be flying on her birthday :( Bye Cindy & hello Karina, how the hook up goes smoothly.

How many kms have you done so far? You missed a really cold front coming thru in s.e. aust, spent the long weekend sailing in albury against snow covered mountains backdrop. Brr!
Julia Gillard's dad died and Alan Jones said he died of a broken heart. Is Mark still powering ahead with the faster sprocket peleton? Jim

Oh Jim, how I miss your banter... Can see those mountains behind you. El x