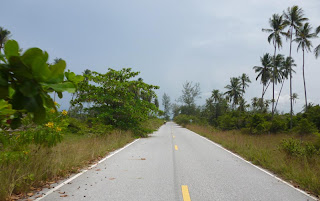 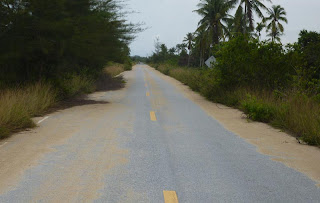 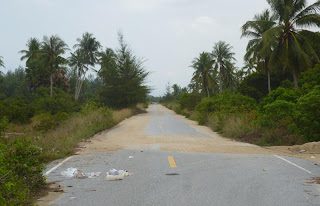 and maybe there's a bit of rubbish here and there 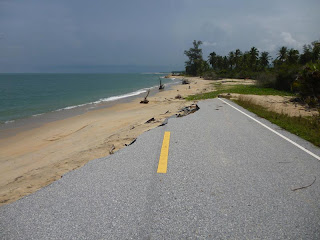 Well after my first 2 weeks I have settled into Team Farkle quite well. This morning we fiddled around with my bike computer to set the correct tyre size as I was averaging an extra 5kms per 100 on the other guys which I didn't mind, but it was a little deceiving! Then it was on and off the bikes to put rain jackets on and off and the rain came and went. Then after a huge 7kms Wally leads us down a "bike side lane" into a market where we had to stop to sample the local delicacies.

Now I thought I had signed up for riding a bike, but for this morning it was pushing a bike through sand! The road had been washed away and alarm bells should have rung as the approach road had vegetation creeping into the centre of the road so was obviously little used. As we passed chunks of tar half buried in sand at the waters edge we literally pushed on in hope of solid tarmac.

The wats are slowly being replaced by mosques as we approach the very muslim area near the Thai/Malaysian border. One mosque had a huge kids playground out front to cater to everyone, and another had creatively used green shade cloth to shape their minarets. Our morning stop was run by some friendly Muslim men adorned in their little hats who we convinced to serve us proper Thai coffee with condensed milk rather than the Nescafe muck everyone seems to want to serve us white foreigners.

As we pedalled back to the safety of the highway our lunch was not the usual rice or noodles, but fried purple yam and fried bananas which made a nice change. Our afternoon stop was like a Thai version of ice˜ kacang - a refreshing but strange bowl of shaved ice atop bit of fruit and colourful jelly. The mute girl working there was very excited by our adventurous ride to Singapore.

There is a huge military presence as we near the border and have passed through dozens of road blocks today, but the guards armed with guns are as friendly as everyone else. If we waved to every person that sings out 'hello' we would be permanently riding one handed.

The last 10kms into Narathiwat  we met some members of the Thai cycling team who kept up with us on their shiny manual bikes. It was an easy navigate to the Pacific Hotel as we slipped in just before dark to our threadbare blankets and towels, yet perfectly comfortable rooms at AUD$15 a pop. In true Wally style our predicted 88km day miraculously turned into an enjoyable 105kms.

That was great, thanks for the newsy update Karina. After knowing Walter for some time, he is so predictable, I now think he tries to convince himself that the distance to destination is only half to 3/4 of what the actual distance is, hehe.
Hence, now I just :)
I can imagine the rest of The Team, quietly smirking.....
You gotta love the enthusiasm & in fact if the road hadn't fallen into the sea, it was probably a Wally shortcut, lol :) xx

Is this a peleton or a bloody writers convention? Honestly the standard of journalism here is making a better read than our local tabloids. You guys ride and write from exotic parts; I just ride to Macca's, read the free Telegraph and wish I was still there! JR