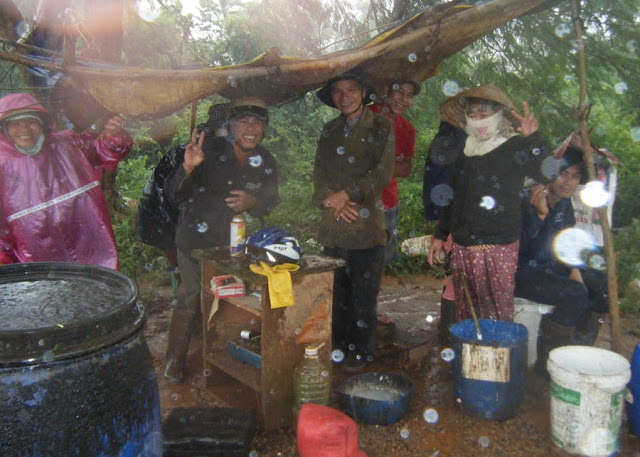 A sudden downpour in the Vietnamese Highlands and cycling alone, Jim dropped off behind on "Bike China". A call from the only shelter about. Occupants appear surprised I turn my bike toward them. They huddle up even tighter in the lean to that barely holds the leaking canvass roof.

They motion that I should put on my helmet to keep my head dry. I look through the numerous vents of my cycling helmet at them which apparently in mountain villages without cycling helmets is hilarious. Laughter is the common language.

The rain buckets, water rises over my ankles, the road disappears, then out of the gloom comes Jim on "Bike China". Running out Jim rides past shouting "not stopping". Turning back I snap a photo, my foul weather friends are pointing after Jim,  Faces have universal meaning.

I point my camera at myself and fellow saturated occupants, the flash goes off. This trick was apparently new. A fluke good shot first time. The camera is passed around the eight pairs of wet hands with much laughter. 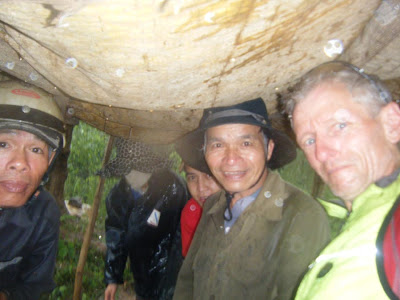 The rain eases, saturated I farewell smiles and waves. Cycling a few kilometres the road is almost dry. Jim is well ahead.

Mark Collins or Mark Twain? Well logged.
You could have talked about a spent Jim holding onto your bike while you towed me for 15 kms into Danang, or out riding the Zocos up the Ho Chi Minh highway. But that's o.k. Its not your cycling that most impressed me, rather your natural grace doing tai chi at dawn over Halong Bay! Looking forward to a salsa in Spain.

We blogged guys, starting to get worried about you between posts.
You even inspired Abbey to ride a bike today.
It must be getting close to your hardest time when going the distance is both really difficult and within your grasp. Keep alert, keep looking after each other and remember: we care!