We arrive at a hotel full of invisible people 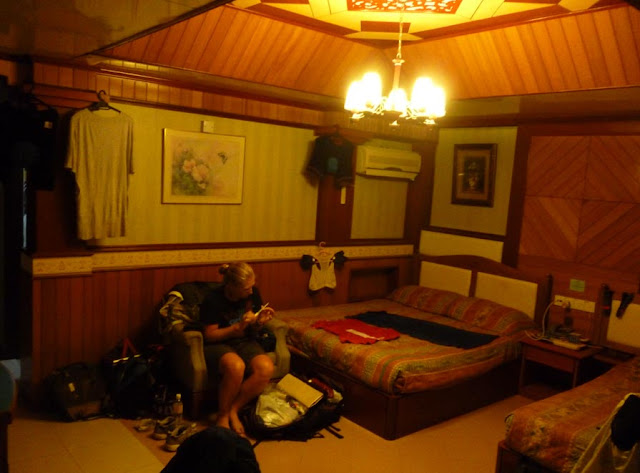 A pleasant if rather hot ride today from Bukit Keluang to Merang, where Walt had managed to book us into the Suria Resort hotel on the internet, despite being told on the phone that they were full. The taxi driver stopped on his way back when he spotted us on the road to say the Suria had tried to refuse our bags as we didn't have a booking. So he tried the Sutra resort, who didn't want us either, so he went back - stalwart fellow - to the Suria and insisted we had booked on the net. On arrival we were pleasantly surprised to see the pile of bags waiting at reception.

Next problem - one room was king size bed, and as they were booked out, no more twins available. But agreed to put an extra bed into the double.

The question is - apart from two kids in the pool and a woman with an iPad, we haven't seen another soul. Where is everybody? The restaurant can seat 144 (I just counted) but was full only to 1/36th capacity (= the team) all evening. We can understand them not wanting to eat here as the food was lousy, but there's nowhere else.

We are learning to be pretty sanguine about the word 'resort'. This place resembles, on the inside, an 80s old people's home and on the outside, a prison. When Walt asked at reception about excursions and things in case we wanted to stay 2 nights, she could only come up with boats to islands, whereas Karine found a list of things in a moment's googling - though we probably won't do them as the second night here doesn't really appeal. We're going to see a crystal mosque instead!