Border crossing days are never that easy and this one was less easy than most.

We rode the 45km or so to the border, at the seedy-looking town of Poipet, without mishap, and weren't even particularly late. Our new contacts at the Thailand Cycling Club had got in touch to say that one of their members by the name of Jeab would wait on the Thai side for us. Lucky was at the Cambodian side with the luggage and after a bit of sim card buying and money changing we were stamped out of Cambodia in short order and went and joined the queue for Thailand.

We stood in this stationary queue for some time. Then realised that there was a gate at the front of it which was opened periodically to let a batch of about ten people through. It wasn't a long queue, but the gate opened so rarely that it must have taken an hour to get to the front. when our batch went inside to the passport control hall, we found that our queue had only been the queue for the queue. Or rather a whole roomful of queues in front of a row of desks. We duly chose one, served our time and got through - Wally's wet Australian passport raised a smile but was happily accepted! - only to trot back round to the back of the first queue to retrieve the bikes.

Into Thailand we rode, quickly and unexpectedly changing to driving on the left, and couldn't see Lucky anywhere. Walt was short of fuel so we found lunch instead, and Al rode around a bit looking large, white and conspicuous until Lucky spotted him. By this time we had heard that Jeab had business and had had to leave, but we were to go to a petrol station down the road a bit and call, and he would come.

Well, the map wasn't big on context so we couldn't find the petrol station so with Al emailing hurried apologies to the TCC folk on his barely functional phone we decided to press on. Lucky had gone off in a rather expensive taxi with the bags. Then at a water stop at another petrol station a big Hilux pulled up and a woman started yelling at us and mentioning bikes. This, it seemed, was Jeab - she gave us our card and sure enough, the second part of her name was Jeab. She was most voluble, though sadly only in Thai, and kept trying to make us put the bikes in the back of her ute so she could drive us to Sa Kaeo where our hotel and bags were. Then Rit from the TCC happened to call so we put him onto her and they jabbered for ages on Walt's last 15% of battery. Then she continued jabbering on her own phone to someone else for ages, then insisted we stay the night with her friend in Sa Kaeo. We really needed to get going as we still had 50km to ride and it would be dark, but she wouldn't stop jabbering, and when we tried to politely go she almost screeched at as to wait as her friend - another one, it seemed, was coming to see us.

With many obeisances, we left, promising to call her when we got to Sa Kaeo, though suspecting, rightly as it turned out, that we wouldn't have the energy. We made it around dusk.

The Kawee hotel was probably built in the late 60s, and probably last cleaned in the early 70s. Even the walls were filthy, though mercifully the sheets were not. The rooms each had a tiny TV, padlocked into its own little cage lest it should try to escape. The bathrooms….. no, I'll stop there.

The upside was - Karina was there to join the team, having found her way to the dodgy Kawee from Bangkok. What must she have thought?  Welcome Karina! 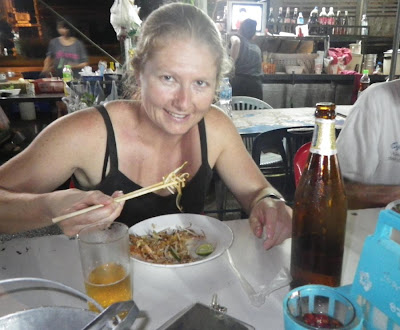 Hello Karina, great to see you've made it. So nice the Team let you ease into the riding - not - what 123km on your first day then 130ish the next :( Enjoy