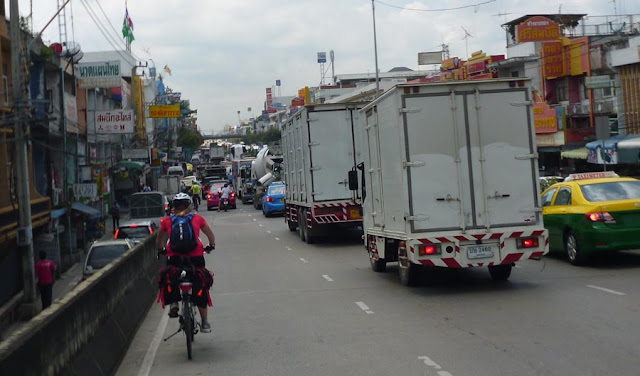 After a brief delay when we found out that the hotel we had booked wasn't actually in the town where Google and its own address said it was, we were off to face the perils of Bangkok traffic. But the start was a phoney war - Walt had persuaded the gps to plot a course away from main roads, and we tooled along on tiny village lanes between fish farm ponds and banana plantations. But the rural idyll was not to last. We didn't exactly notice it happening, but the roads escalated in size and traffic volume until we were on 4 lane highways with fast traffic, going over flyovers and bridges and who knows what else.

Walt's guardian angel at least put in an appearance. We were stuck at a spaghetti interchange, unable to get onto a huge bridge to cross the Chao Prayha river. Back-tracking, we found there was a toll and we weren't allowed on anyway. While trying to interpret directions from the toll girl, the GA sent along a young Thai fellow on a serious bike who knew enough English to explain the way to the bike friendly alternative bridge. He himself was planning to go another way, but at some point decided we were obviously too incompetent to find the way on our own and ended up leading us there himself.

It was a long, hot, noisy, dusty, fumey slog to Samut Sakhon in the outer suburbs, and of course we got there in the dark, but it was a relief to know that the worst of Bangkok was behind us, and the karaoke was at least quieter than the night before