Another day, another ferry 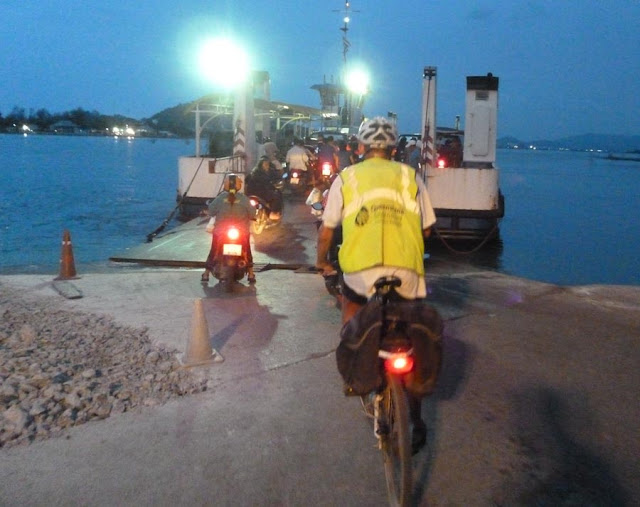 Mr Water crosses the water. Our bags, when we eventually found them, were under the name of Mr Water.

A latish departure from our friends at the Holiday Hotel (see coughing4cf on Facebook for just how friendly they were), due to a bit of chain-oiling and tyre checking added to the normal ritual of water-filling, sunblock-applying and so on, meant that we had only got as far as the hot springs at khao chaison, about 20km down the road, when our advertised late breakfast stop became, due to it being one o'clock, lunch.

The more perspicacious among you are probably wondering why we might want to hop into a hot spring when it's 32º and about a million percent humidity, and you'd be right; we didn't, but it was on the way (or so we believed until Walter revealed after the fact that it hadn't been) so thought a stickybeak might be of interest.

Well, the lunch was pretty good, but when Mark went to check out the spring he found the bath bit empty and the spring bit full of suds as they were cleaning it.

So we resumed, and had to push the pedals pretty hard to have a hope of covering the remainder of 106km before dark. The goalposts seemed to keep moving - I'm sure Walt said there were 20kms to go at least 3 times. And then there was the question of a stretch of water. The gps said go round - it's so conservative I swear it does cross-stitch of an evening - while google maps said go straight over the lake that was in the way. There was no sign of a bridge so we assumed a ferry, but couldn't be sure of  reliable answer if we asked around,  certainly not if we wanted details of departure times and so on. So we took it on faith, belted on full power into the gathering dusk, and were first encouraged by a big sign saying ferry port, and then relieved to be waved, free of charge, straight up the ramp and onto the ferry, which departed about 6 seconds later. It was a replay of Cambodia - our bikes the last four vehicles right at the back, though at least this time there was a barrier between us and a watery grave.

The crossing took all of five minutes, and we disembarked right in the large town of Songkhla, where the trusty iPhone led us to the rather tautological Lake Inn Hotel. The collection of large boats outside our window lead us to believe that in the morning we will be enjoying a lake view.

Oh yes, the bags. When we got here our rooms were booked but there was no sign of the bags. The words bag, baggage, luggage and cases were not familiar to the hotel girl, and even Al's drawing of a taxi, a bloke and some luggage produced no understanding. She brightened at the mention of a taxi, and tried repeatedly to call us one, but we failed entirely to convey the idea that our bags should have preceded us. Wal tried to call the taxi man so he could explain to her, but couldn't get him. So we opened a door at random near reception and there they were, all 10 of 'em, sitting patiently not 10 feet away. The girl said something in Thai that may well have been Oh, you mean THOSE bags, and we were sorted.