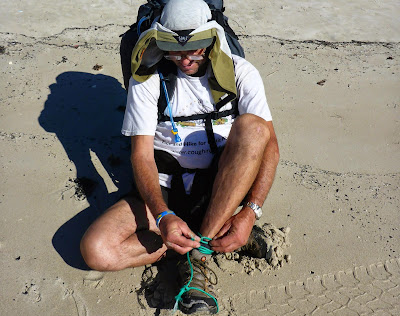 The French Canadians woke up in their tent outside, Greg woke up in his tent set up inside the hut, and Marilyn woke up in her Hammock with fly screen. I woke up with all the flying insects in the world around me.  Tonight Eleanor may bring me a fly screen hat to cover me at bight.

First thing I wrestled with my sleeping bag zipper which has lately been playing up a bit. Mountain Hardware is a great brand, I shouldn't have trouble with that!

We got on our way, were Farewelled by the  roos and headed into the snake infested dunes. The snakes all seem to pose no threat to us. Great way to get rid of fobias! They are so fast you can hardly take photos if them. One baby copperhead to frightened to move we captured in a photo. Lots of ups and downs and a fierce sun shining down upon us. As we were advised about this time of year, it can get hot!

When we reached Quarram Beach I had just finished my Kamelpak. Still had a bottle of water for our lunchtime soup, but I had forgotten to refill it this morning. Right there as we entered the beach a friendly Fishing couple topped me up with rainwater they had plumbed into their 4WD. Great rescue!
Then my sole suddenly separated from my boot. Quality Merrel light hikers with well under 1000kms on them over two years.... again most unlikely event. I tried tying my shoe with rope to prevent more sole separating we still had 15kms or more to go today. At least we are heading for the caravan today!!

We got to the rowboats across the inlet, and were surprised at how big and heavy they were. We had to lift them from the boat house into the water and row about 100m across the inlet. We had heard it was a tiny crossing you could wade across, but I was glad we had the rowboats! As we were going against the usual direction of hikers we decided we didn't need to do a boat juggle ti leave enough boats on each side. We left 4 on the side people were coning from next and two where we came from.

As we are slow and knew no one was walking behind us from the logbooks and huts we were confident this was a good thing to do. In all reality we should have each taken a rowboat as we exceeded the maximum safe load by a small margin. There was no wind or waves and we wore the  life jackets provided...

From the other side we had a relatively quick walk into Peaceful Bay. Snake variety changed from copperheads to tigers, and we saw one suspected red bellied black snake.
Just before the campsite I received a message from Eleanor to say she made it, and we found her and caravan without any trouble. No phone reception to speak of here, except the occasional one minute flash of signal...

Great seeing Eleanor! We had assumed she got here before 9am and expected she'd walk along the track or beach to find us during the day...  but she had missed her flight in Perth due to  there being different terminals.... Two other women were stranded in the same fashion and somehow they all managed to find a car to give them a 6hr lift to Albany! From there she hitched on to Denmark to pick up the van and just got there before us. A miracle I think! We had a fantastic meal at the Peaceful Bay Campsite, complete with hone caught fish and Vegie burgers.

Tomorrow we hike on with Eleanor in tow!
PS Eleanor didn't get around to getting me a fly screen hat :) I'll get one tomorrow from the camp shop!