Back on the Bib 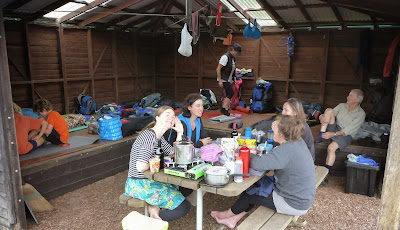 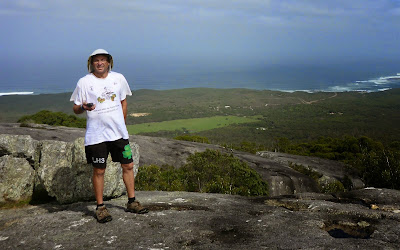 This morning we reluctantly left the caravan with fully stuffed packs. We discarded items we didn't use and brought things we thought might cone in handy. A shopping day yielded us ample stock cubes for hot drinks. Beef, chicken and vegetable stock - none apparently contain meat!

First challenge for today  was the 300m Mount Halliwell (?) After which it all looked relatively flat. It wasn't really and lots was on sandy tracks.

At lunch, on a bench near a public beach access, we ran into Ann, a cyclist heading towards Adelaide and a few other nice people just enjoying the day. Wild seas (5m apparently, and we later heard two fisherman drowned after getting swept off rocks :( ).  Smashing white foam over the rocks and beaches prompted the older male to say he wished he'd brought his surfboard. I'd die in there for sure lol.

Very weary we showed up at the Williams Bay hut which we found full! A ten year old was celebrating his birthday there, a group of four mums and four kids. Also just arrived and exhausted were John and Bruce, 68 and 73 yrs old no less!
The party had driven in some supplies including booze and cake and had walked in from a nearby access point... We were kindly  offered some food and cake.

Somehow I don't think we'll be asleep at 7am tonight... Ree's dehydrated beef stroganoff still tasted delicious with the instant mashed potatoes, sitting on the outside bench.

One of my meds leaked... Not sure which one, but it made a bit of a mess. Anyways, better go do my neb session with my book squashed in our little place in the hut.