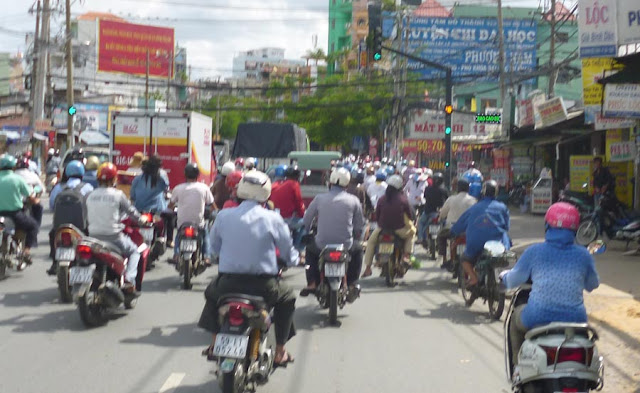 The team rolled into Ho Chi Minh city in splendour and with time to spare for Andrew to have a shower and a massage before leaving for the airport. Bon voyage Andrew and thank you so much for being a part of the escapade.

Jim went ahead as ever, having put an ill-advised 10 extra pumps of air in his back tyre. Halfway to HCM this exploded and Nam had to be dispatched forward to take Jim and his crippled steed to a bike shop. The rest decided to put the batteries on full power and gun it from the outset. The terrain was flat and the sun blistering and Andrew set a cracking pace - guess he couldn't wait to get home. We hit the urban sprawl at least 20km out of the city and wove our way in between about 3 million mopeds to the Mifuki hotel - Walter and his trusty gps navigating us here without a hitch. As we turned the last corner
Nam appeared in the car - he had been scouting around for us - and Jim jumped out of a taxi, complete with bike china. He had been lurking somewhere a little way out and saw us go past, but even the redoubtable Jim could not keep up with the Zocos on full power, so resorted to a reasonably terrifying taxi ride, with the team in sight for much of the way.

Cindy arrived just after Andrew left and the baton now passes to her. We have a day off tomorrow, so she can get the hang of the bike before taking on the HCM traffic in earnest.

Jim here
Wot a ride this has been! The best parts:

Climbing the steep passes of the Ho Chi Minh highway, listening to your own breathing echoing off the hills, and cooling in the waterfalls at the side of the road.

Or having the handlebars of your bike fixed by a man with no hands.

Or just watching Wally, Alastair, Andrew and Mark, brilliant in fleuro, set a demon pace as they close in through the wild traffic in central HCM city.

Thanks Wally, it has been the experience of a lifetime and for you it isn't even half over. This is a very serious test for you. Good speed and g'donya!

And remember everyone - Wally and the team are still in need of help, especially for support vehicles. Our thanks again to Vinacrete for providing Nam, who was a hero, but there are always extras to pay and the money for vehicles is going faster than expected, and we have yet to make any arrangements for Thailand and Malaysia. Head on over to www.coughng4cf.com and click on the map to support the team directly via fundrazr. Thank you! 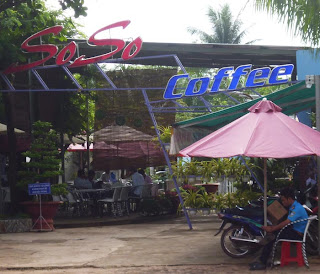 Best of luck folks. Cindy - glad to hear you arrived safely and hope you have fun out there.
Tony

Glad you got a massage in Andrew, safe trip home. I'll get to PNG one day!! Jim, what are we "they" going to do without you & Bike Chi & Bike China, you would have to be the fittest man or woman for that matter that Walter has ever met, well done you provided many laughs for the readers, safe trip home with your excess in bikes, lol :)