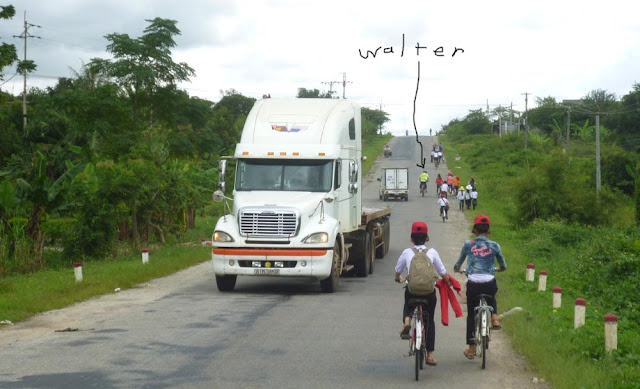 Walter negotiating the after-school traffic. His arm would be pretty tired from waving by this point. Note the van overtaking him overtaking the cyclists.

We rode about 100km today but we can't be sure as the second bike computer has now had a hissy fit and isn't measuring properly. The GPS will reveal all eventually. Mark and Jim were way in front as usual, and paid for it by being caught in a huge downpour that even stopped Mark in his tracks. Now the poor bloke has a rotten cold.

Team farkle (Walter, Andrew and Al) were well behind and could see the black clouds that soaked the other two, but only got a little wet themselves. Their lunch stop turned into a bit of a party - a shot of vodka each from the next table and a shared glass of something remarkably like grappa from a large plastic drum. The noodles were good too.

We have discovered why the hotels were refusing to let us foreigners stay - it seems we are now in a politically delicate area and need police clearance to stay in a hotel. This should be a formality as long as we pre-book, so Wal is at this very moment researching tomorrow's stop and doing his coughing, ace multi-tasker that he is. Luckily the rather larger than usual Pleiku Hotel accepted us, muddy legs and all, so here we are. It even serves breakfast!

First thing I noticed was the truck overtaking all at the brow of a hill, ug. Poor Mark, oh well he shouldn't have any trouble getting chicken broth, just boil the left over chicken head from last night, yuk! Take care in this politically unfriendly area, we are all cheering for a fantastic team :)