The Day of the 3 in 1 Coffee Break 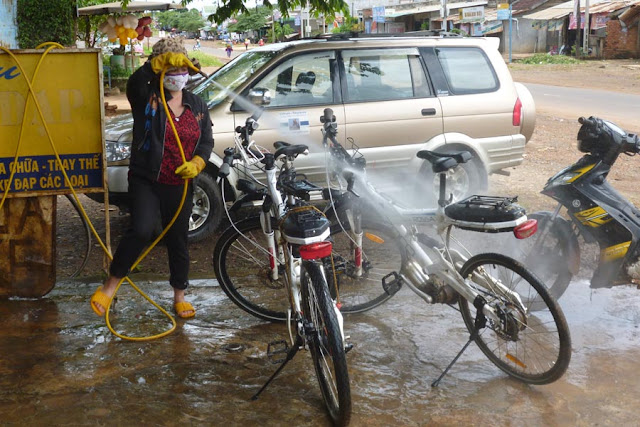 The Zocos had been looking a little unkempt for the last few days. In fact they were covered in mud. So what could be better than a tiny coffee place in a scruffy town with a motorbike-washing joint on one side and a barber on the other? The bikes had a spa treatment with a pressure hose and good old soap and water and a sponge, while Andrew and Walt's chins had a not dissimilar experience.

So after a day billed as mostly downhill which somehow contrived to feel as if it was mostly uphill, we arrived in Gia Nghia looking unusually presentable. The Zocos are now linked together by a stonking great chain and padlock, fitted by the hotel (what kind of a town IS this?). Jim and Mark had, as ever, preceded the rest, and heroically found the hotel, despite our having been given the wrong address. Still in with a chance of getting Andrew to the airport on Wednesday night. Will we make it?

Great to see you are supporting these little financially struggling villages. Well done cleaning the Zoco bikes given they are serving you so well. I have lived in my
Mad Bomber hats & funky wrist warmers all the Tasmania winter, especially at Cradle Mountain in the snow :)