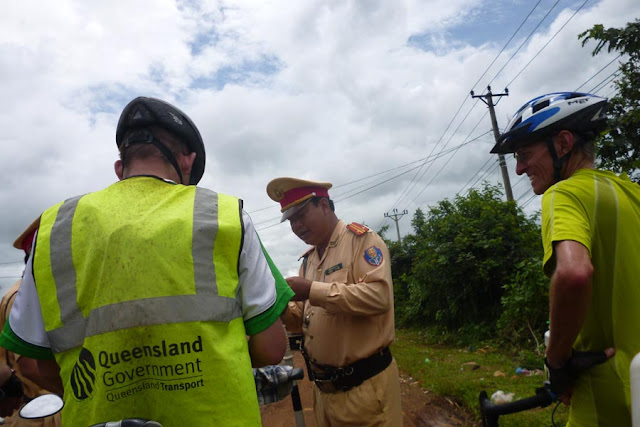 "I'm very sorry, Mr Van Praag, but the Queensland government is a proscribed organisation in these parts"

From Pleiku it was downhill most of the way and we made good time, rather hemmed in by buildings and a huge rubber estate, until we came down off a plateau and saw a vast, open landscape before us with distant mountains behind. Rather magnificent, it was.

Jim had done his customary disappearing act in the morning but Mark stayed with the peloton this time. He was slowed down a bit, by Mark standards, by a dodgy stomach, but soon recovered and whizzed off into the distance. The last 25km got their revenge a bit as things went uphill again, but we are now installed in Eu Drang, after the stalwart Nam trawled the town for somewhere who would take us. Thank you Vinacrete for providing his invaluable services!

This hotel seems to be run by two barely teenage girls - they checked us in, carried bags, moved 2 bikes (which were locked together, causing a lot of giggling) waited at dinner, the lot. They then went back to their texting and copying drawings from Manga comics. We have no idea where the grown-ups are, if indeed there are any. Al's towel is possibly the smallest so far. You could perhaps dry an infant with it, providing the infant wasn't too wet to begin with.

We are now counting days as we need to get Andrew to the airport in HCM City by Wednesday. Will we make it? Don't miss tomorrow's thrilling instalment!

(Oh, we got stopped by the Police, but they only wanted a chat)

The police probably regretted stopping you, I can imagine Walter bamboozling them with numerous cards, paraphernalia, etc. They were have been perplexed with the speed of Wally talk, lol