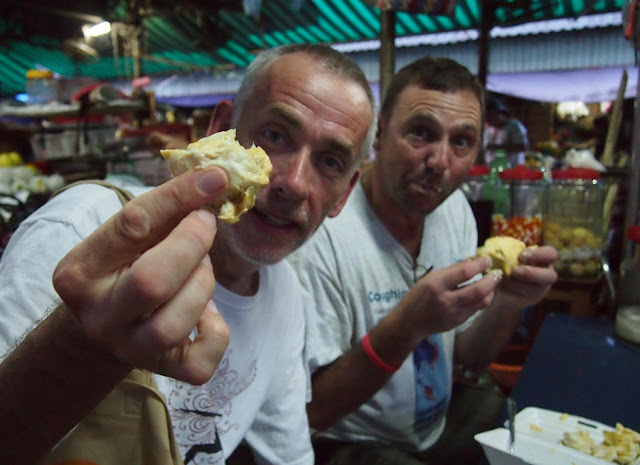 Walt and Al enjoying their first Durian stop of the trip - but it wasn't a very good fruit. Mark and Jim were up at the crack of dawn and went off too see the DMZ and the war tunnels. After a hard day yesterday Al and Walter decided on a bit of a lie-in but had reckoned without a hammer drill starting up about 3 feet from their window at 7am on a Saturday morning. Walter being Walter he immediately downloaded an iPhone app to measure the sound level. 93dB in the room. Happy to say El had recovered from a bit of queasiness the night before but elected to ride in the car with Nam and bike-chi to Hué. So Jim rejoined the peloton on his original Zoco and the four boys made it to Hué in pretty good time without mishap, unless a sore bum counts as a mishap. El quite taken with bike-chi, and led us on a cycling tour of the market and the citadel - sans batteries, sans helmets, sans lights, sans everything.

Perhaps queasiness is morning sickness??? Hehehe. I need a partner in this crime!

Durian, yuk I can smell it from here!