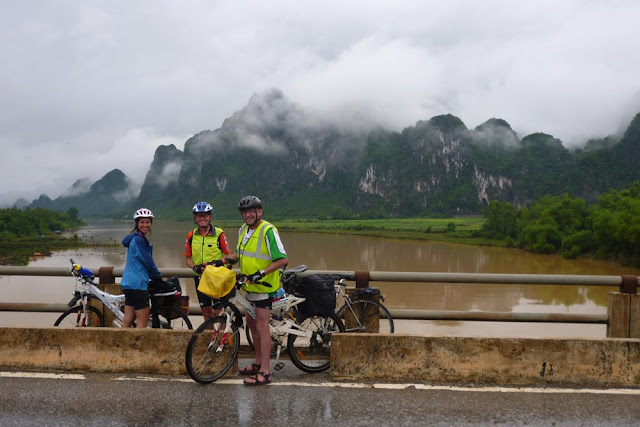 We had a bit of a drama today. We set out from the rather seedy Ha
Quang guest house and continued down the Ho Chi Minh highway, to our
now-familiar chorus of helloes from the local kids and adults and,
surprisingly, one water buffalo. It soon started raining, but we
didn't mind that, and the terrain started to get hilly but we didn't
mind that either as the Zocos helped us power up and good ol' gravity
helped us zoom down the other side. Fun! El and Al were in front and
Mark and Walter behind, with Nam at the back in case of crisis. A and
E stopped at the top of the biggest hill as their batteries faded, and
Mark soon joined them. Mark's a human battery so doesn't have that
problem.

Looking way back down the hill we waited for Walter to appear. A
promising speck came round the bend and immediately fell off its bike!
Back down the others went, hearts in mouths, to find someone had
indeed fallen off Walter's bike, but that someone wasn't Walter - it
was Nam. He was fine, and said Walter was driving the car. So we
waited for him to catch up. For quite a while. Then what did we see
but a lonely figure approaching up the hill. On foot.
It transpires that Walter had a bit of a sugar low and stopped to buy
some bananas to keep him going. Nam decided he would help out by
riding the bike for a bit and letting Walt drive the car. But he
stuffed up on two counts - he failed to communicate his plan to Walt,
and he accidentally locked the car with the key inside.

So there was our beloved team leader, his banana skins limp in his
hand, with no bike, a locked car (containing his phone) and, well,
that's about it. All he could do was set out to walk after us, which
he did for about half an hour until his ever-vigilant guardian angel
knocked Nam off his bike and set a resolution in motion. To his great
credit, Walt went from wanting to kill Nam to understanding that he
had meant well in no time flat.

Meanwhile Jim - leagues ahead of us as ever on bike-chi - had found a
hotel, checked us all in, and was showered, changed and relaxed when
the rest of the team finally rocked up.

And that is where we are now.

Just for the record, we cycled another 130kms at an average of 22.6kmphr through significant ups and downs! The hardest part, the first 65kms took up one battery.

How terrible that the car was locked
and poor Walter had to walk...
All the best, my thoughts are with
all of you all the time!
Good luck!

Note to Wally's team. When Wally throws, I'm gonna kill wobbly or you can't look at him sideways face - check blood sugar, it's either high or low. As you've discovered he needs to eat continuously, ha, my grocery bill has gone from $300 a week to $50, lol. Enjoy, a fantastic effort to all :) Hoi Ane will make the last 2 weeks worthwhile.