Another late start as we pottered around finding torches, chain oil and whatnot, adjusted some brakes... Only about 90 to go and we made quite sure there was a real hotel already booked so there shouldn't be any surprises........

Very hot again, but 90km meant we could use a fair bit of battery so we made good progress. It's great riding through the Cambodian villages - they build beautiful wood plank houses up on tall stilts, and continue to build them in the same way, some thatched and some with fish-scale tiled roofs and elaborate finials. The kids all rush out and wave and say hello to the funny foreigners (they were doing it last night too in the pitch dark - how do they know?). Our attempted lunch stop was odd. There were lots of stalls by the road, which people seemed to be living in, and some tables and chairs and a few unpromising veggies and pots with no fires under them, but lots of bowls of eggs sitting on bain-maries over unlit little charcoal burners. Gestures about eating these eggs provoked great hilarity - they may have been incubating them to hatch. Nothing else seemed on offer so we got out some munchies of our own and ended up handing them round. First time I've been in an eatery where the guests feed the proprietors.

Soon after we realised Mark wasn't behind us, but we didn't worry as he often stops to take pictures and then zooms past us again. Then we DID start to worry, and soon he called to say he was sick and vomiting by the roadside, and having trouble breathing. He soldiered on for a bit but was soon pretty crook again so Walter got Mom to come back in a taxi. These little towns don't HAVE taxis, so she persuaded a shoe shop man to drive her back to collect Mark and bike and take him the last 10km or so to the hotel. Seemed to be heatstroke - after all, Mark is working much harder than us slackers with batteries - but a doctor came and reckons he has flu. He has been coughing for a week. Anyway he has been cooled and medicated and rested and seems a lot better. 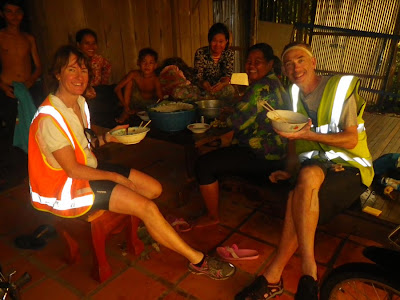 The rest nearly made it to town without the tropical downpour experience. It belted down and we pulled in under someone's front porch to shelter. They were very welcoming and ended up giving us a bowl of noodles each - and extremely fine noodles they were.

So here we are in the hotel in Stoung, sans aircon, sans wifi, and perfectly comfortable. There is a family of three living in the corridor outside our rooms. Odd.