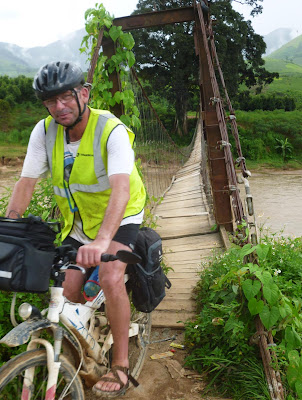 He came, he saw, he broke it. The Ho Chi Minh highway looking a little the worse for wear in the wake of a certain Dutchman........


Well we made it!

When we got down to breakfast Jim had miraculously disappeared - wanting to get a good start on us until the rest caught up and Al and Andrew in relays could help get bike China up the hill. He had reckoned without the length of time Team Farkle needs to get under way in the morning - and their dedication to coffee stops - and reached Dak Leng 3 hours ahead of them.

The scenery in the mountains was magnificent - emerald hills with the occasional rice paddies (not many - mostly too steep), our progress marked as ever by the crossing of rivers large and small, clear and brown, and dotted with small villages of traditional wood-plank houses containing children clad in traditional Manchester United strip.

The Zoco electric bikes got us up the hills with aplomb, though we still had to pedal hard and chewed through 2 batteries each. The mostly smooth and lightly-used HCM highway threw a couple of surprises at us in the form of sudden road works - deep, sticky mud with many ruts and invariably a truck labouring through from the other end. Just the way Walter likes it - he was in his element!

Must be all that pent up gas Wally surprises one with, lol. He does look the part! Go team, go - not too fast though.