There is a reason we haven't blogged for a while... We've settled quite nicely into a delightfully comfortable resort in Hoi An for a well deserved rest-break thanks to Scott and Estel from the Devonport based, Kentish Funerals (many, many thanks, from the bottom of our bottoms).

The ride to get here on day 9 was monumental. We conquered The Hải Vân Pass, ("ocean cloud pass") with an elevation of 500m. We deliberated for some time the evening prior as to whether we had the stamina and conviction to ride it or take the tunnel instead, but with the promise of fully charged batteries and immense scenic views (and Jeremy Clarkson's blazing trail) we decided to do it. Thank goodness we (thought we) were prepared because it turns out we couldn't go through the tunnel on bikes anyway.

As per schedule, Jim left early to get his head start. Mark left second and was soon behind Jim. Al, Wal and El left last (a definite pattern). Jim called up Walter after surrendering himself and Bike-Chi to the mountain and jumping into the sagwagon with the Driver, and bet El's socks we wouldn't make it up. 300m from the summit, El's battery died and she swapped it for her back-up only to realise it wasn't charged at all. But, we all made it, somehow-or-other to the summit only to be badgered by shop vendors so the moment for us all was a little lost. So down we went, and within no time Walter discovered he had no brakes. Let us say the sole of his shoe is now a little thinner. After a quick fix, we still had little confidence to really belt down, because really, we have scant idea about brakes. T'was a long day - about 10 hours on the bikes. But we made it, albeit in the dark. It was a good ride for El to finish on and she gets to keep her socks.

Now, the team prepares for the next leg, from Hoi An to Ho Chi Minh, minus El, but plus Andrew from PNG.

We should also mention that Jim has acquired a new bike, and we'll leave the performance review to him. He's currently on the scout for a suitable benefactor for Bike-Chi. And as always, Mark is powering on on his road bike, and today, day 11, he's decided to put in a lazy 110kms in the blistering heat just for fun to visit the attraction, 'My Son.

PS Alastair carried a big Pomelo fruit in his panniers for the last two days... Waiting for the perfect moment to eat it. Pomelos are about as common as apples at home... 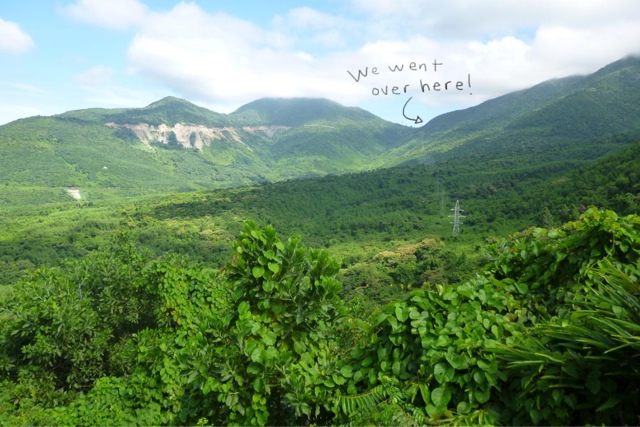 Fantastic Team, so pleased you had a couple of rest days. Hoping your battery is recharged Wally. Loved this newsy blog. Bye El :)