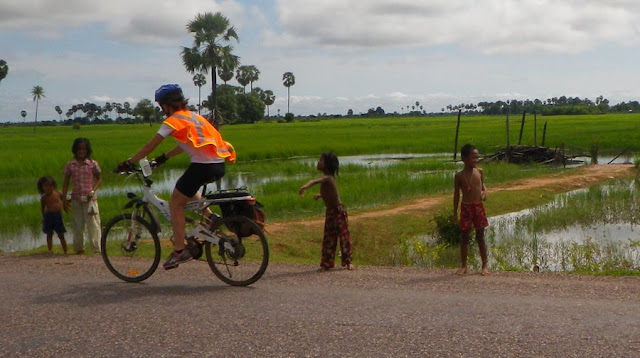 Quick! Come and look at the funny white person!

Grubby and dishevelled, the team rolled into Siam Reap for a 2 day stop to recharge our batteries - physical, spiritual and lithium ion. We will have time to give the bikes a bit of tlc, courtesy of Mr Bobo whose bike shop Walter found on the internet and who knows what a disc brake is, and visit the temples of Angkor Wat. Thanks for this stay at an upscale hotel go to the Wishing Well Clinic in south west WA who have generously sponsored some of the team's expenses.

The family in the corridor at the hotel in Stoung turned out to be the accounts department - it was to the bloke that we paid our $20 for three rooms.

It was another day of sleepy villages (with the main road running through the middle), waving moppets and inscrutable brahmin cattle. Mark felt a lot better and decided to go on ahead and arrive before the afternoon got too hot. Walter, Cindy and Al rolled along in his wake, but still made pretty good time and got in well before dark, for once. Then a quick late lunch became a bit of an ordeal - they brought the first person's drink, waited till they finished then brought the next person's. Ditto the food. Strange and time-consuming, though as Walt pointed out it made the cost of the meal per minute very reasonable.

We parted unexpectedly from Mom today. She had to go back to Phnom Penh to sort out transferring her son from one school to another. But she brought along another son, a much bigger one, to help us until we go to the border. This son, Lucky, has never been to Siam Reap/Angkor Wat before, so will see this wonder of his cultural heritage as our guest, which is rather nice. His English is not as good as his Mum's but he can always phone her for help, and his Khmer will be invaluable.

So pleased the team is having a much deserved rest, & I'm sure your bums all 4 of them will enjoy some R & R!
Keep the great posts coming.

I am starting to miss it now that I am no longer on the tour! It already looks quite different; flat for one thing and much less economic activity ( food stalls and scooter shops) by the road.I really look fwd to your posts.Jim