You think cycling the Nullarbor is dull? 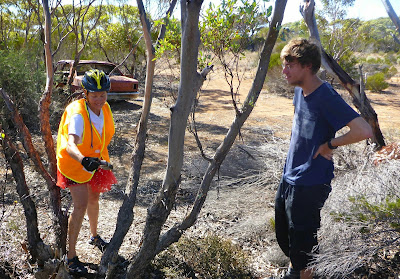 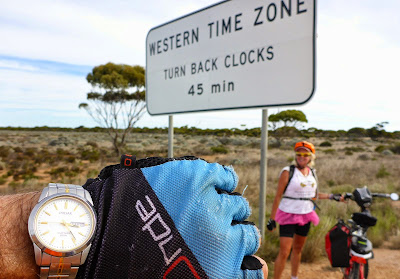 Another super early start. Amazing what a sunrise at 530am does. We were out riding at 730am again! Marilyn and I crossed another cattle grid, we've past perhaps one a day. Then we ran into Tobias who was Geocaching, and we joined him to find an old XW Falcon wreck 200m off the road with a hidden Geocache which we found without too much trouble. I haven't done a Geocache for a long time!

We continued to Cocklebiddy for lunch, saw about half a dozen roadkill eagles, which is nothing compared to the 494 pipes of bones in the 60kms that Marilyn counted just on one side of the road... Quite sad. And than there is 1080 bait all around the place for the wild dogs (dingos) and foxes apparently who attack stock (haven't seen any!!). A happy camper told us they control the dingos for the safety of campers at road houses! Anyways, leave that topic.

Jo and I cycled to Caiguna, the start of the record breaking longest straight and flat bit of road which we'll ride tomorrow. As if we hadn't gone through enough time changes...here at Caiguna was a sign to change clocks back 45 minutes for some bizarre reason. And next Sunday is end of daylight saving too... Sigh.

Than we thought we'd get one beer in the road house, something that we rarely ever do, and we are recognised by a person there! Neville Bingham and wife Patsie are staying here. He remembered me from an Order of Australia dinner 7 or so years ago! And he is also Jo's group training organiser for the Barrington group fire fighters volunteers! Small world isn't it....

Then Sam and Lauren we met at the cliffs in WA appeared and Sam took some nice pics of us which we'll post later.